Something To Do With Leftover Pizza Dough: Bacon Tunnels 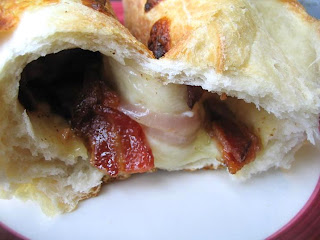 Preheat oven to 475. Slice the onion either in thin half moons or a small dice. Roll out the dough fairly thin, into about a 20" long, 7-8" wide oblong. Put bacon, cheese and onion all along the long side closest to you. Roll the dough away from you, into a cylinder. Pinch the seam closed. Top with some shredded cheese and bake for 10-15 minutes, till golden brown.

I know, the name sounds kind of dirty. But I really couldn't resist. Heh. Anyway, the whole thing with these is I had about a half a batch of pizza dough leftover from the meatloaf braid and needed something to do with it. I wanted to do something a little different, maybe breakfasty. I had really wanted to find some way to work egg into it, but the only thing I could think to do at the time was hard boiled, and that wasn't quite what I was looking for. Next time I think what I'm going to do is cook the bread just like this and then afterward fill it up with scrambled eggs or chopped up fried egg. Hm, I suppose you could just roll the fried egg up and stuff it in like that... More experiments are clearly needed. But, back to the tunnels. They're basically just a big, stuffed breadstick. When I baked them they got a large, hollow center. I think it's because the cheese I used was big cubes so it held up the dough while the outside baked. That's just a guess though. No matter why it happens though, it's really just screaming for some kind of filling. You could put some vegetables in there... I guess. Broccoli would be good. Potato, zucchini, peppers, spinach, whatever you like. So, here is what you do.

First, roll out the dough into a big oblong. 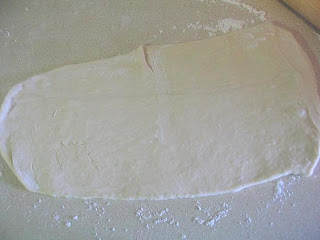 How big? However big you like. I made it about twenty inches by seven or so. I think. Then I just put on the bacon, 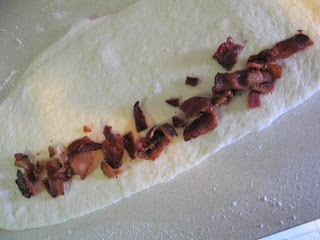 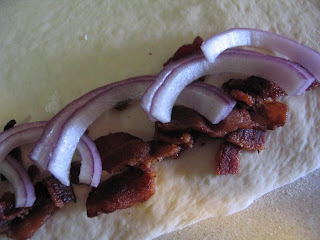 and cubes of mozzarella. 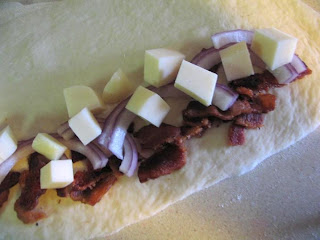 Cheddar would be good too or Gruyere. Hell, any cheese would be good, it's bacon, bread and cheese for crying out loud. Next I rolled it up. I didn't make to too tight, but I didn't try to keep it loose either. I sealed the seam with a little water (didn't work out that well, unfortunately) then topped it with some olive oil and a little more cheese. 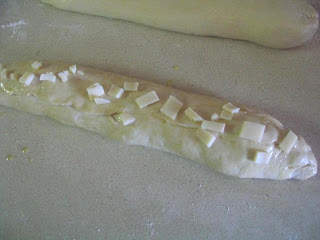 Baked it on a baking stone at 475 for about thirteen minutes, or so. 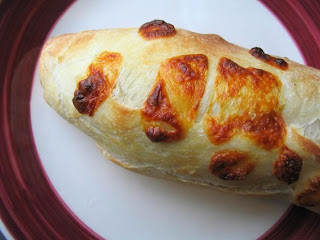 I love the little browned bits of cheese on the outside, it gives a great taste and texture. Sometimes I do it on pizza too, around the edge of the crust. So the verdict is, they are wicked good. But next time I'm going to put more stuff in there. 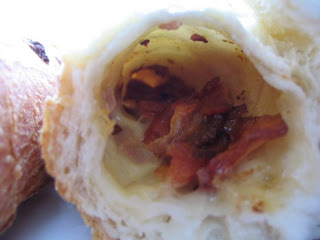 Dirty? Oh no my friend. If it's dirty, then it is the best kind of dirty there is.

Thanks for the info on pizza dough. I have yet to perfect mine. I'll give your recipe (or your brother's) a try the very next time I make pizza. Or this dirty, dirty bacon tunnel recipe.

That looks totally yummy. How can you go wrong with bacon and cheese? Another great idea. I must be 'wicked' tired, cuz I didn't even get dirty out of this. Maybe tomorrow after more sleep :O

Dude... You are TOTALLY speaking my language... If there was some way to work chocolate into that... It would make angels weep for joy!!!

Just like pepperoni bread. I think putting bacon is better though. Yeah!

Seriously I just want to go whip up a batch right now -- bacon, cheese, bread, I mean who really needs more than that?? Can't wait to see what future experimentation brings!!

Love this idea! I will make it with my leftover Kerrygold cheddar (have lots of it left). Yum!

I actually like the hollowness; it looks dense but biting into reveals a lightness and airiness (which might make me feel less guilty about chowing down on bacon and cheese!)

Fantastic idea! It was a stretch but one night we were desperate and got a Pizza Hut pizza--it was "not good" to say the least and we were all drinking water all night, BUT: My husband got "stuffed dough," which meant the outside edges were filled with gooey melted mozarella. It was the best part...just like your creation.

Now why didn't I think of this? Great idea! Next time I make pizza dough I'll give it a try.

This is the third bacon recipe we've seen today. We're cooking with bacon this weekend for sure now.

And here I am all out of bacon! Must. Go. Grocery. Shopping.

YUM! I do something similar with pepperoni! Looks great!

Joie: Hey, I didn't say it was bad dirty. :) Let me know how the dough turns out!

tamilyn: I'm sure you'll get it eventually... or I might just have my mind in the gutter. Heh.

Culinary Alchemist: Ooo, I bet a sprinkling of 75% cocoa chocolate in there would be awesome! Maybe some chili's to make it spicy...

Dawn: Never heard of pepperoni bread, but if it's this with pepperoni instead, I'm in. :)

ChefBliss: That's what I'm saying! Heh, I can't wait to see what happens either. ;)

5 Star Foodie: Thanks, let me know how it comes out for you!

Tangled Noodle: Heh, yeah, the hollowness has it's good points.

unconfidentialcook: I've been wanting to try that out, but don't have a Pizza Hut around here. Maybe I'll have to do it myself...

Duo: You can't resist the bacon!

Gwen: Out of... bacon? Sorry, I just don't understand what you're saying. I know the words, but the concept is so foreign... ;)

Kendra: I bet pepperoni would be great in it. Or both!

Hey Bob,
I've added you to my blog roll. I thought it was about time I did that! Thanks, as always, for visiting and commenting on my blog. It means so much to me. I love your blog, your creative adjectives using the word "wicked" and your cats and felt it was past time for me to add you.

Is it wrong that I want to crawl into that tunnel and "waller" in the bacon? Love the idea and LOVE the tunnel pic!

Looks yummy! I can't say no to anything wrapped in dough :)

What a great idea! I would add some tomato paste and chili flakes...yum yum

This is a nice way to use some pizza dough. I like that you filled it with bacon!

This would definitely make a great lunch with a bowl of soup or as is, looove the savory filling!

I added chopped kielbasa to mine and it was great! My kids said that it was an awesome dinner!