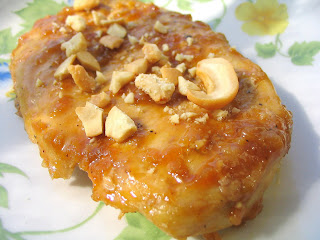 Mix together the orange juice, soy sauce and corn starch. Rinse the chicken then pat it dry with some paper towels. Season the cutlets with salt and pepper. Brown them on both sides over medium-high heat with some butter in a steel pan. Don't cook them *quite* all the way. Remove them from the pan and add in the garlic and ginger. Saute them for 40-60 seconds then pour in the orange juice mixture. Let it simmer till it's reduced by half or so, then add the chicken back in. Let the chicken simmer till it's done being cooked then turn it several times to coat with the glaze. Top with cashews.

Just so you know, the measurements up top are guesses. This was very much a hip shot recipe. But, it's really easy and came out wicked good. I needed something quick to make one night and saw we had some chicken breast cutlets, a big ass orange and fresh ginger. It all just kind of fell into place. And except for the tablespoon or so of butter that you saute everything in there is pretty much no fat.

First, I minced up my ginger and garlic. 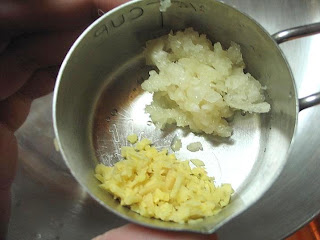 Well, I used a press on the garlic. I like my garlic pieces small and don't have the knife skills to do it quickly yet. Then I juiced the orange. This is half of it. 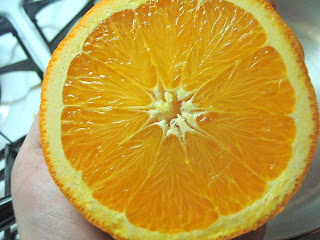 It was bigger than a softball, I got about a cup of juice from it. I think, I'm afraid I didn't measure it. Anyway, then I rinsed the chicken and dried it off. This helps it brown. I don't always do it (and never take pictures of it, apparently), but it does make for a better end result. Then I melted some butter 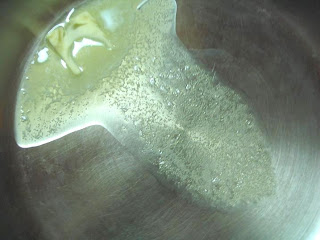 and browned the chicken. 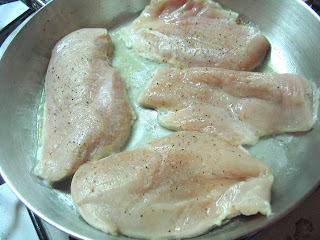 I didn't cook it quite all the way because I wanted to finish it off in the glaze. Then I pulled it out and tossed in the garlic and ginger. 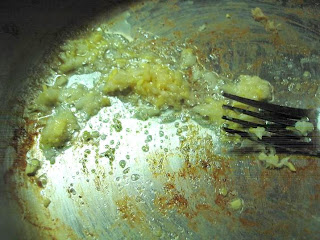 That, my friends, is a fantastic smell. Chicken fond, butter, ginger and garlic. My apartment still smells like it and I couldn't be happier. Once I had sauteed them for about a minute I poured in the orange juice. 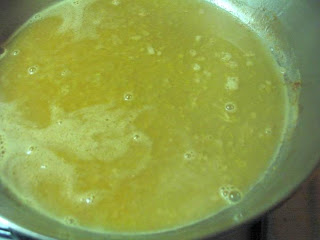 If I had been planning ahead a bit better I would have mixed the sauce up beforehand, but I wasn't so I didn't. Brought it to a simmer and scraped up anything from the bottom. Then I added the brown sugar 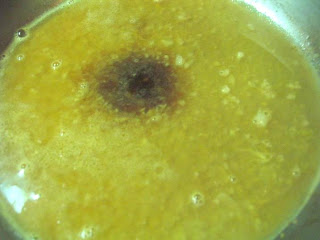 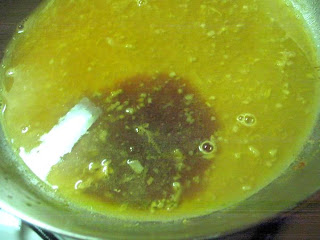 After reducing for a while I tossed in a little cornstarch mixed with water, to thicken it up a bit. Then I tossed the chicken back in and let them finish cooking. 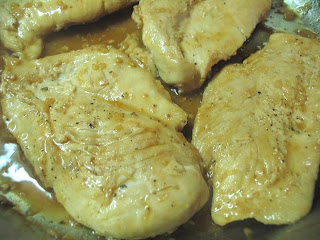 Then I just flipped them around a couple times to coat them and that was that. Except for the cashews. I had cashews. So I put them on it. I mean, why not? 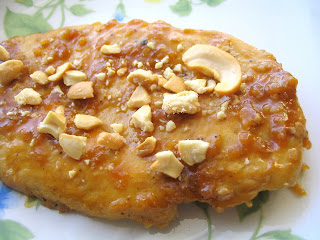 I served it with potato medallions. I will be posting about them sometime next week probably, I need to do a few more things. Like take pictures. But having it with rice would be good, or double the sauce and serve it over noodles. Slice it and put it in a sandwich/wrap, or on a salad. You know, stuff you do with chicken.
Email ThisBlogThis!Share to TwitterShare to FacebookShare to Pinterest
Posted by Bob Labels: asian-esque, chicken, low fat, main dish, sauce at 3/05/2009 12:26:00 AM

I really love the idea of having the citrusy taste of orange in chicken. This looks yummy =)

WOW! This one's a keeper. Thank you for sharing the recipe & your photos. ;o}

This looks soooo good!! I love the flavors. And the potatoes sound great too, can't wait for that.

OhMyGOSH! you MUST be psychic! I spent this weekend looking for a simple recipe for chicken with some sort of orange influence (but nothing hit me in the face as IT)as we have a pile of oranges and we seem to be slowing down eating them! I made a pound cake with them (substituting them for lemons) and wanted to make something with chicken too! I cant wait to try this, it looks wicked good! Thanks for reading my mind Bob!

Bob this sounds way better than those chemical-laden ones we sometimes get at chinese take away. Love the cashews too!

that is one mighty good glaze recipe! thanks!!

Ginger and chicken is fab together. Love the orange added, looks great!

This looks awesome!! Very similar to a secret recipe I am working on!!!! Yet different!! I love it! And I love orange chicken!!

Nice color and flavor there. The citrus is always a welcome taste!

noocook: Thanks! It worked out to be a great combo.

Reeni: Thanks! Probably next week I will be posting about the potatoes. I have a couple days off, so I should be doing a whole bunch of cooking.

MaryAnn: Heh, I do what I can. Let me know how it turns out for you!

Dawn: Thanks! It was much better than what I've gotten at my local Chinese places. And it's healthy too. :)

noble pig: I have to agree. I just wish I had a orange tree so it was more fresh. Ah well. Heh.

duo: Thanks, it was really good last night. ;)

Looks delicious! I'm always on the look out for new chicken recipes.

This is great - a recipe where I can mentally check off every ingredient as something I already have! What do you think of a splash or two of some vodka? (I read this AFTER your ginger-vodka post)

Kerstin: Thanks, if you try it let me know how it comes out.

Tangled Noodle: I bet a splash of vodka would be good, particularly if it was ginger vodka. Heh.