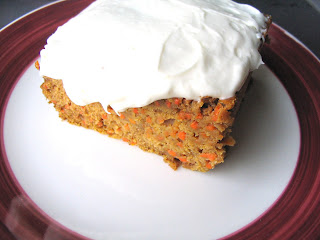 Preheat the oven to 350. Grease a 13x9 pan and line the bottom with parchment. Whisk together the flour, baking powder, baking soda, cinnamon, nutmeg, cloves and salt in a large bowl. In a separate bowl mix the eggs, baby food and sugar until smooth and creamy. Slowly add the oil to the egg mixture, while still mixing. Mix until thoroughly incorporated. Add the flour mixture in two additions, mixing until nearly smooth. Fold in the carrots. Spread the batter in the prepped pan and bake until a toothpick comes out almost clean, about 25-30 minutes. Cool completely before frosting. For the frosting, beat together the cream cheese, Fluff and vanilla. Add the sugar and mix till smooth.

I'm back! And I brought some cake. When I asked my girlfriend what kind of cake she wanted for her birthday I was expecting her to say something like "super chocolate fudge", "strawberry butter cake" or something. But she said "reduced fat carrot cake". I said "er, what?" But she insisted. She had found this recipe in one of my Cook's Illustrated magazines and really wanted it. So I made it. It's actually really good, you would never guess that it was reduced fat. According to CI, it has a third of the fat of regular carrot cake and about half the calories. Not too shabby. Plus the frosting (the most important part) is wicked good. I was a bit worried, since it had Fluff in it. Fluff kind of weirds me out. The cakes texture isn't perfect, but I think if you served it to someone and didn't tell them it was a light version they would never know. 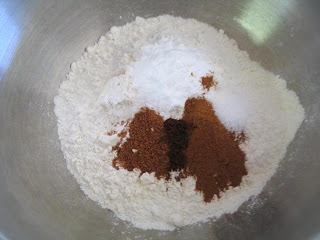 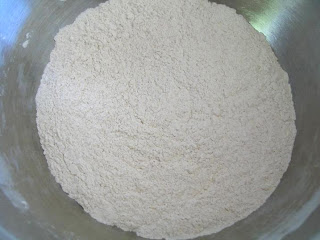 Now, the wet ingredients and the sugar. Eggs, brown sugar and baby food. 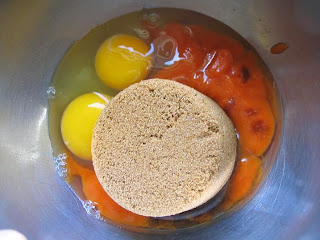 Yeah, baby food. Apparently a lot of low fat carrot cake recipes call for things like prune puree. I don't know why you would use that when carrot puree is available and matches the flavor you are going for, but who can tell why people do anything. Make sure to get baby food that has just carrots and water as its ingredients. You don't want any of the other stuff they might put in there. Anyway, mix the wet stuff together. Add half the dry stuff, 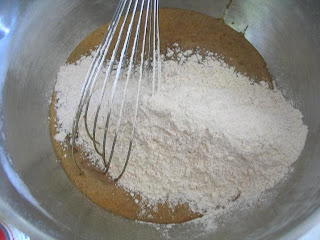 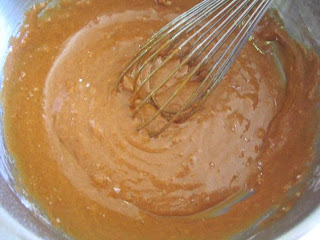 then the rest of the dry stuff 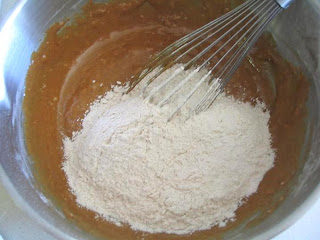 and mix it most of the way. 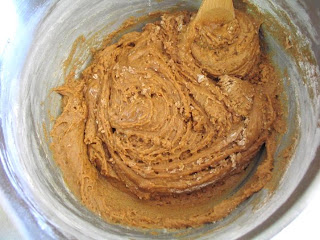 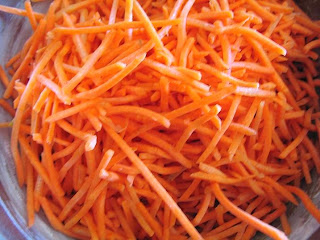 These are just bagged pre-shredded ones, but next time I think I will do it myself. They were a little thick, not that you notice it in the finished product. Fold those in. 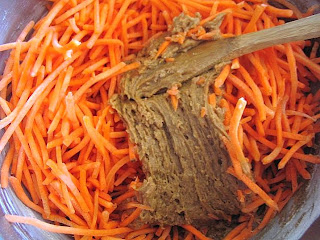 Next, spread it out in the prepped pan. 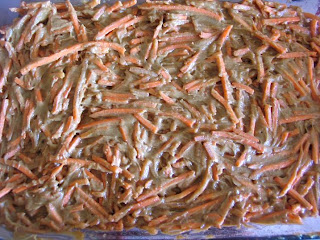 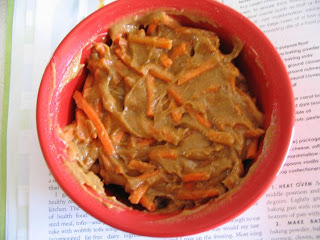 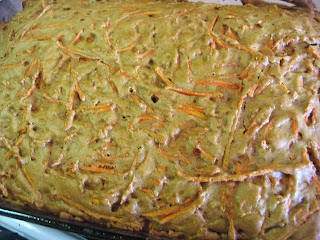 While they were cooking I made the frosting. I'd never had Neufchatel before, it's pretty good. First you take the cheese, vanilla and Fluff 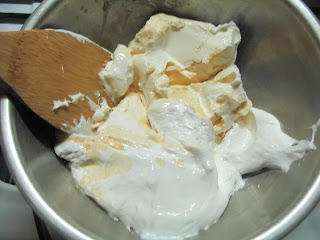 and mix them together. 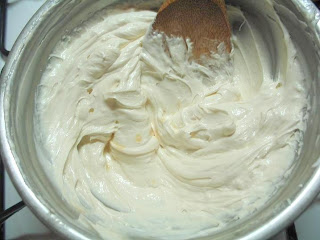 Ok, I'm not really a big Fluff fan. I was deeply concerned about putting it in one of my favorite frostings. But you don't notice it and according to CI it adds something good. So there you go. Anyway, mix it all together, then add the powdered sugar. 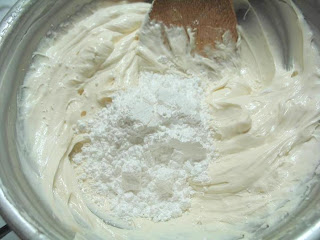 Mix it together and that's that. 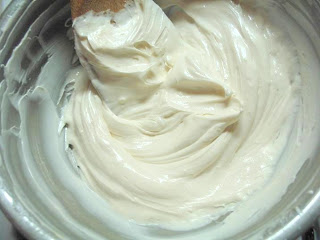 Feel free to ignore the finger marks in it. Hey, I had to check it! What if it was no good? Let's move along, ok? Pull out the cake, let it cool and frost it. I frosted up the little one for my girlie. 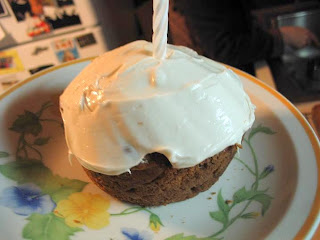 So there it is, reduced fat carrot cake. Good times kids, I highly recommend it.
Email ThisBlogThis!Share to TwitterShare to FacebookShare to Pinterest
Posted by Bob Labels: baked goods, cake, cheese, low fat at 3/18/2009 12:30:00 PM

That frosting sounds so. good! Really! Fluff is an interesting thing to pop in, and now we may be converts. Sweet birthday treat. Pun intended.

I find it really interesting that the recipe had baby food in it. Very cool! I could definitely go for a taste of that cake!

I remember this one. My hubby has requested a St. Louis gooey cake (I think that's the name). He saw it in one of my Cook's Country's. The frosting does look good.

Sounds good to me right now with afternoon tea!

CI knows how to make a recipe perfect. So, I can see why she choose it. Good call!
It really does look good Bob or wicked! lol

Doesn't look low fat at all. Carrot cake is alway good for a party-I bet it would work in a jelly roll pan to feed a crowd.

I love that 'fluffy' icing and I bet the baby food made it moist. I have a real bad cake craving now, it looks really tasty!!

How nice that you made her the cake she wanted. Sweet. That frosting sounds kind of yummy to me. I haven't had Fluff in YEARS... maybe I'm missing it!

Baby food...okay I never thought of that...omg the possibilities. Have you tried banana baby food...pears...veal...just kidding.

duo: You can't taste the fluff, it just adds some body and sweetness. Give it a shot, it's good stuff.

5 Star Foodie: I had it with coffee for breakfast. ;)

tamilyn: Doesn't taste it either. Heh.

Reeni: CI says that's what the baby food does, keep it moist. I see no reason to doubt them. ;)

Karen: Of course I made her the cake she wanted! I hadn't had fluff since I was a kid. It's really weird stuff.

Just stopping by to say hi! Thanks, as always, for your comments.

This looks really good. I'm not a fluff fan either but I might try it for this!! :)

What I love about this recipe is that it doesn't ask for some strange, faux-ingredient like butter substitute or something. I've used applesauce to replace oil in some baked goods but never thought of baby food! What a great idea!

You are so sweet to make your GF exactly what she wanted for her birthday!

Fantastic step by step instructions!
and this is a delicious looking cake!

I love carrot cake! Definitely intrigued by the Fluff icing! I've been wanted to make some fluffernutter cupcakes for a little while...may have to try that recipe out!

ChefBliss: It doesn't taste like fluff at all, it's wicked good.

Tangled: I never would have thought of baby food myself. Gotta keep the girlie happy. :)

I love carrot cake. So nice to see a recipe for a healthier version. Thanks for sharing!

I wonder is anyone would notice id I used your Cream cheese fluff frosting on the Carrot cake I have to make this week for a birthday party.. Hmmmmm... casue It sounds REALLY good..!!

Culinary Alchemist: I bet if you didn't tell anyone it wasn't normal cream cheese frosting they would never notice. It is wicked good. ;)

Anonymous: Whoops! Fixed it. Sorry about that.