So I've been wicked busy lately. I haven't been posting as much as I want or been able to comment on all the blogs that I would like to. It make me feel almost excessively guilty. And since my girlfriends birthday is on Sunday, I'm not going to be around much this weekend. But, I will make up for it next week. I have a failure that I'm going to write about and (hopefully) a salvage operation on the same. Plus the cake I'm making for her (if she ever decides what kind she wants) and anything else she wants me to whip up. But in the meantime, here is a big chunk of sliced steak tip. 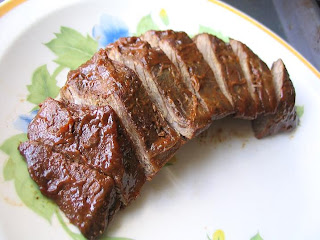 Which I made into a sandwich. 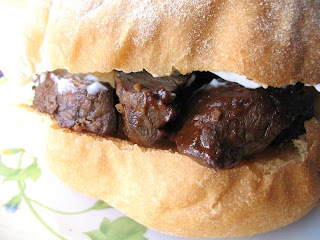 I seared the steak, then when it was about halfway done I poured in some barbecue sauce and let it simmer till it was cooked, turning it every once in a while to coat it nicely. Good times.
Email ThisBlogThis!Share to TwitterShare to FacebookShare to Pinterest
Posted by Bob Labels: beef, random stuff, sandwich at 3/13/2009 10:30:00 PM

Good-looking sandwich! Happy birthday to your girlfriend and looking forward to seeing the cake!

is it wrong to want a bite of this sandwich at 5 in the morning?

That's a nice slab of meat to make a sandwich out of! Happy Birthday girlfriend!!! Save me a piece of cake!

A wonderful steak sandwich to kick off a birthday weekend. Looking forward to this intriguing failure/salvage operation that you've alluded to!

A happy birthday to your girlfriend! what did she pick for a cake?

This looks terrific!! Have a wonderful birthday weekend, relax, enjoy!!!! Can't wait to see what you have in store for us!