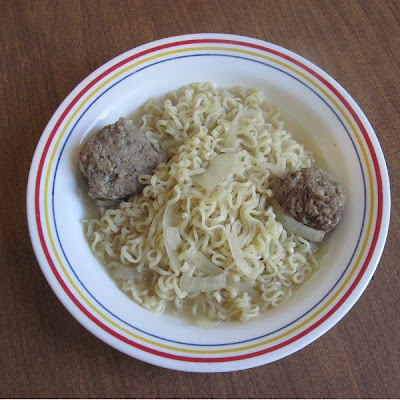 Start the meatballs in a medium pot on medium heat, let thaw a bit. Add cabbage or any other vegetable you're using if you want them soft and saute for a minute or two. Add the broth, soy sauce and seasonings, cover, reduce heat to low and let simmer for 15 minutes or so. Remove the lid, turn heat to high and add the ramen. If you want crunchier cabbage add it now. When the noodles are done, eat it.

Lion's head meatballs are, from what I've gathered, a fairly traditional Chinese dish. They're usually big pork meatballs served on braised cabbage, but I decided to fake it with my multi purpose ones and some ramen.

So, in the interest of cooking stuff as cheaply as possible, here is another installment in my series on improving packaged ramen. I'm pretty sure I mentioned this in some other post about ramen I've done, but here is the first step in making packaged ramen better. 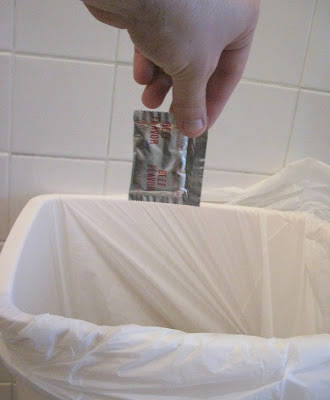 Yep, toss that packet. If you want that much salt in your broth you can add it, but you'd better have a strong heart. Because I mean damn. Salty. Anyway, toss that crap and grab a couple meatballs from the freezer. You could make them special for this, but this is the reason I like to keep a bag of them around. Toss them in a small pot and turn it on medium low to start them defrosting and also get a little of that fat out. 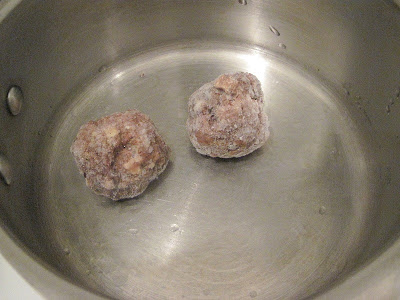 Now I didn't have cabbage, which is too bad, so I tossed in some onion I also had in the freezer. 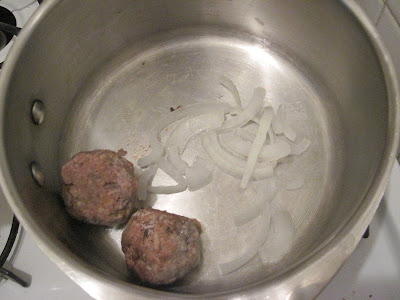 I've been meaning to do a post about freezing veggies, I'm sure I'll get around to it at some point. Depending on how you like cabbage you could put it in now and have it thoroughly braised (not my thing) or add it towards the end and leave some crunch. Which is what I would have done had I had any. Next, broth and seasonings. 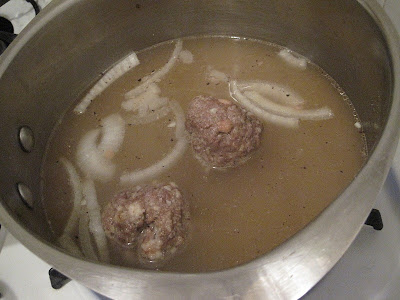 I know it doesn't seem like a lot of spices, but remember there isn't a lot of broth going on. You could use fresh too, but I didn't really feel like it. Another thing I didn't have was soy sauce, but I did have this. 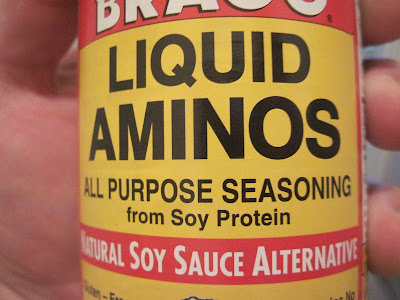 Some friends of mine gave it to me and while it doesn't really taste like soy sauce it does the same kind of thing. It has that dark umami that you're aiming for with something like this and it worked just fine.

Now cover it up, reduce heat to low and let it simmer for a bit so the meatballs heat through and absorb some of the flavors. Once you're tired of waiting because the kitchen smells so good remove the lid, crank up the heat and toss in the ramen. 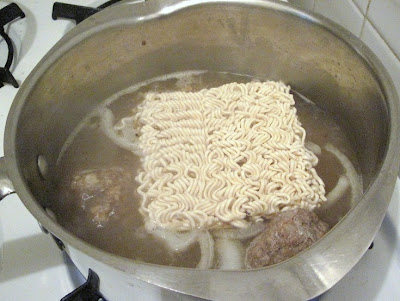 Ah, ramen. A poor boys best friend. Once the ramen is cooked, it's all set to go. 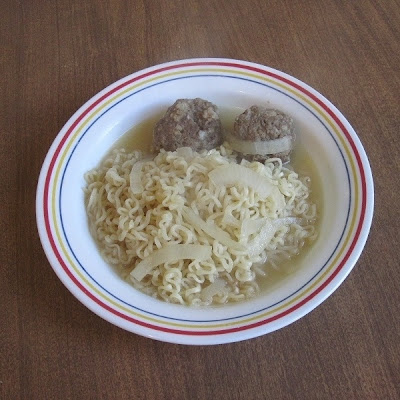 Not exactly the prettiest dish, but it was wicked good. Next time I'm definitely making sure I have cabbage though.
Email ThisBlogThis!Share to TwitterShare to FacebookShare to Pinterest
Posted by Bob Labels: beef, meatball, pork, ramen at 9/20/2011 01:05:00 PM 6 comments

I've got a lot going on right now, so I'm afraid my posting will be a bit sporadic. But I do have some cool stuff I'm planning on doing, so don't forget about me! And since I'm already posting something, here is a pic of egg salad with salami. 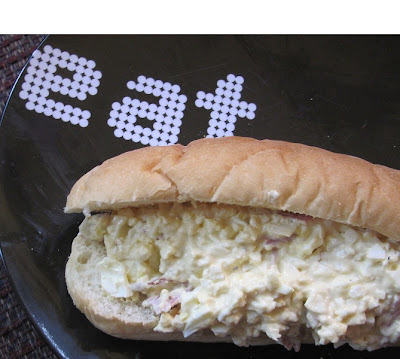