Here are a couple more of my brother's cats. This is Lola, she gets what she wants. 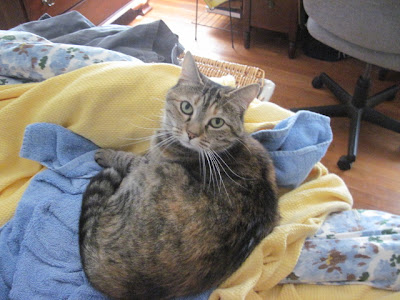 She is also completely insane. This is Shadow, he is an enormous love, although not graceful at all. 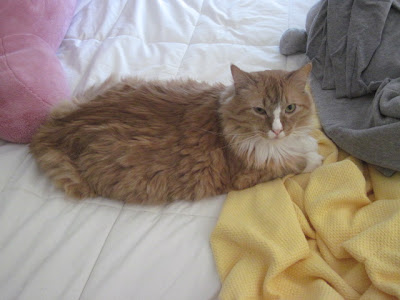 When we play cards he likes to lay in the middle of the table and have us put cards on him. 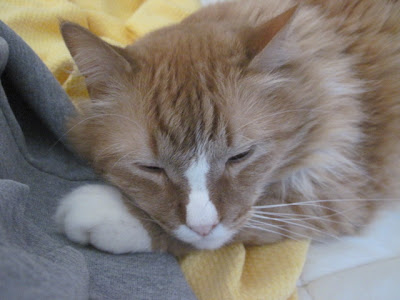 He's a bit odd.
Email ThisBlogThis!Share to TwitterShare to FacebookShare to Pinterest
Posted by Bob Labels: cats at 6/24/2012 10:11:00 AM 1 comments

I know I've posted about tamales before and didn't put up a recipe. And now I'm doing it again, which is kind of mean. But here's the thing, I don't really have a recipe. I know I should since I was planning on posting about them, but I was cooking with my mom and we just kind of tossed things into pots while we chatted and didn't really pay too much attention. 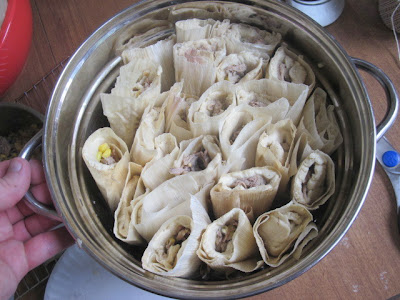 What we did was kind of riff off this recipe from Alton Brown, mostly just for technique. Since I'm such a swell fellah I'll list what I remember us using at the end of the post.

My mom made the pork, she braised it the night before, then we defatted and shredded it the next day. We added another can of green chilies, some more spices, some of the braising liquid and simmered it until we decided it was done. This decision took several tastings, fortunately there was lots. 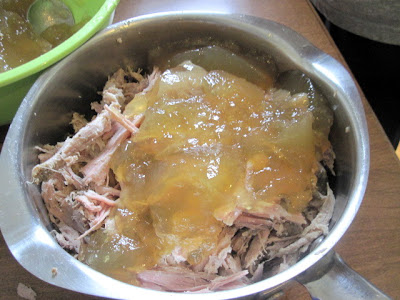 Mmm, gelatinous. The bone turns the braising liquid into stock, it's a good time. Now Mr Brown suggests using lard in the dough, but we decided that since lard is pretty much the absolute worst thing you can eat we would use the fat from the braised pork instead. 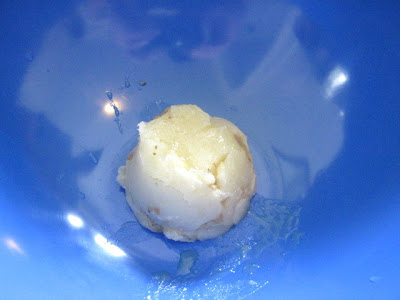 You know, because it's healthier. Heh. Plus it has tons of flavor, not to mention the fact that it was already available and didn't require going to the store. Making the dough is easy, you just work the fat into the masa like you're making strussel, 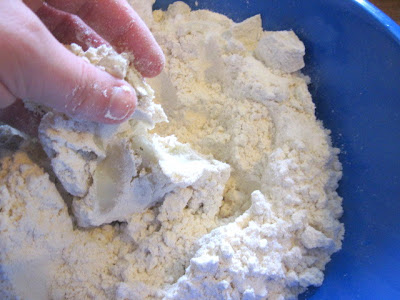 then add the liquid 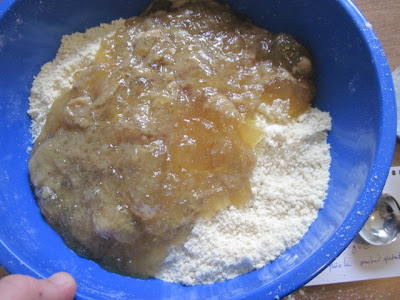 and mix. And there it is, time for to make tamales. 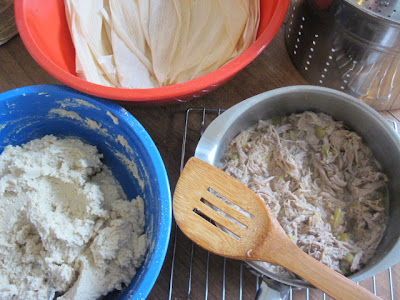 We pretty much followed Alton Browns directions, except we made them bigger. 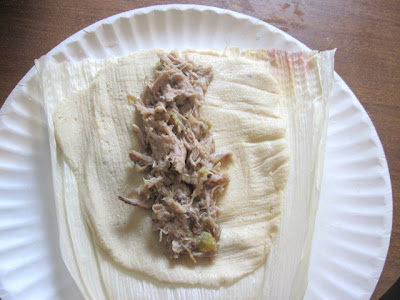 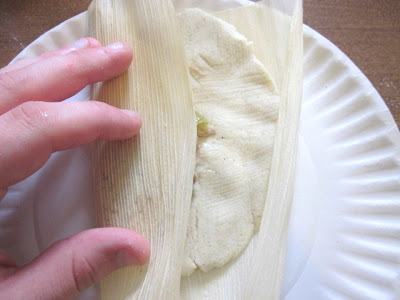 It took us most of the afternoon to roll them all up and since they were about twice the size as the recipe called for it took twice as long to steam them. 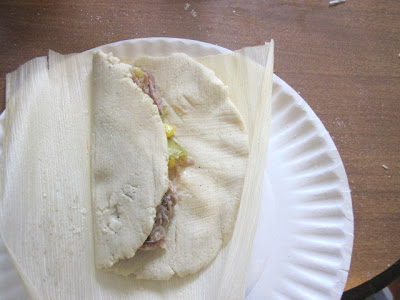 But it was worth it, they came out awesome. 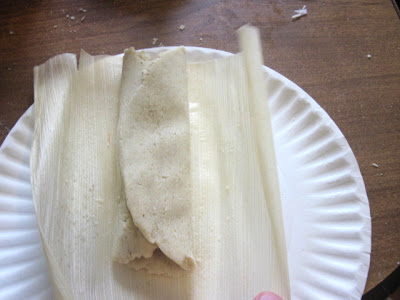 Sure, there were tons of them, way more than we could conceivably eat in one sitting. 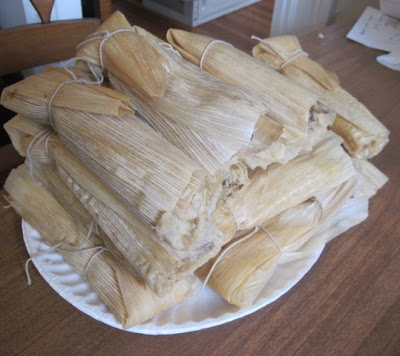 So I sent her back to my brothers with about a dozen and tossed the rest in the freezer. They freeze really well, it's a good time. We did eat some, of course, served with salsa, sour cream, sharp cheddar and some green onion. 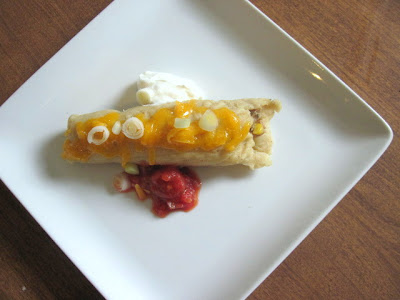 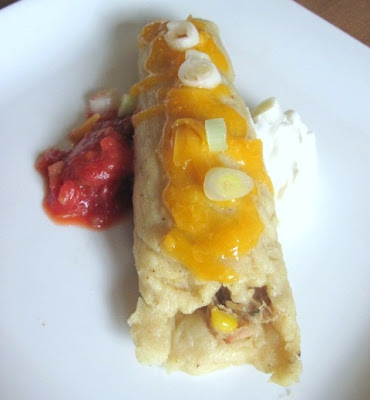 Doesn't stay that way for long, I assure you. 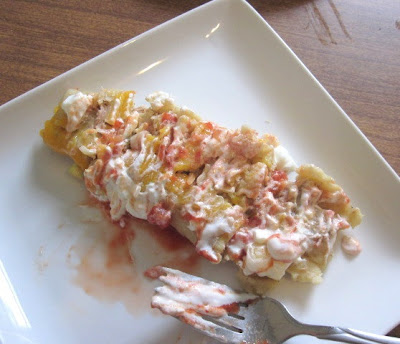 As promised, here is the basic list of ingredients we used:

for the filling:
3 lb bone in pork shoulder (Boston butt)
chicken broth for braising
cumin, oregano, chipotle powder, garlic, onion, tomatillos, green chilies (one small can while it braised and another mixed in after shredding), fresh lime juice, cilantro, frozen corn, some of the braising liquid (reserved to mix in once the meat it shredded) 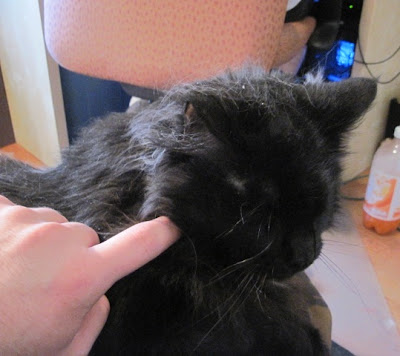 I'm sure you all remember her, she's the cat with no eyes. She is also one of the largest cats I've ever known, one of the sweetest too. 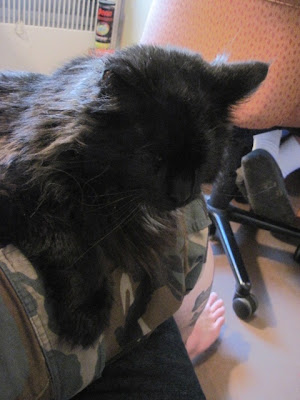 She startles easily, but then tends to just roll onto her back to insist on lovins. 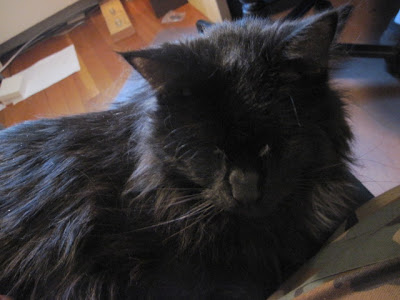 Since her face is all black with no eyes it's hard to get a good picture. But I figured since I was posting about food my brother made recently I should also post about his cats.
Email ThisBlogThis!Share to TwitterShare to FacebookShare to Pinterest
Posted by Bob Labels: cats at 6/17/2012 07:44:00 AM 0 comments

My brother makes the best baklava. 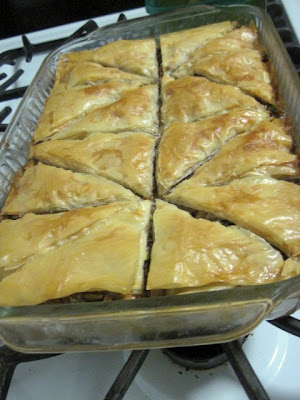 It's not as cloyingly sweet as other recipes, which I really like. 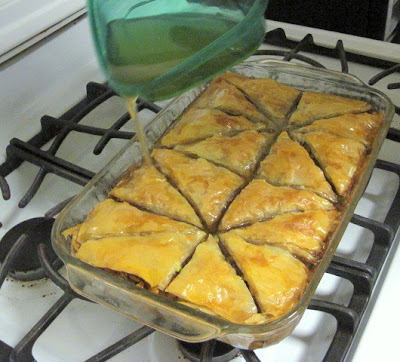 It also involves three sticks of butter for a 9x13" pan. 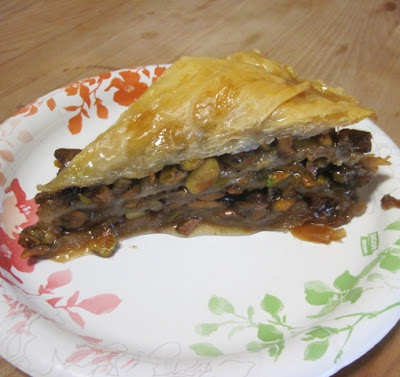 So, not healthy. At all. Also a pain to make. But so fricking good. 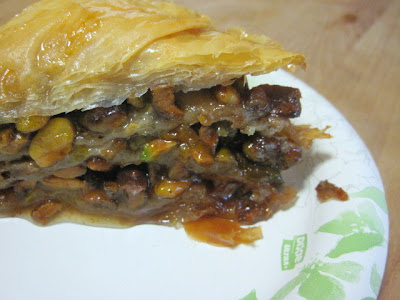 And since I've been having writers block lately, this is all you get. That and the fact that I don't have the recipe. I'll get it and post it though, eventually. Now, more coffee.
Email ThisBlogThis!Share to TwitterShare to FacebookShare to Pinterest
Posted by Bob Labels: honey, nuts, phyllo at 6/14/2012 07:13:00 AM 1 comments

Ok, I have a good excuse for not posting this week. See, my parents are visiting and my mom was actually staying at my place. What did we do? Well, I introduced her to the Belgariad so she sat on my couch reading it all week while I played Diablo 3. What? Don't judge, that's how my family gets down. We had a good time. There was also food, of course. Including this. 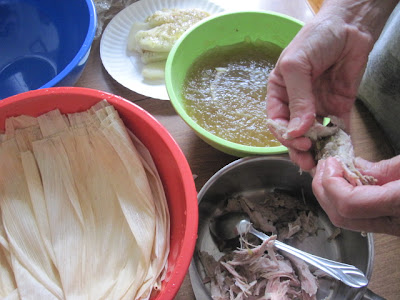 Do you know what it is? Guess! I'll post about it next week. In the meantime, here is a picture of a meatloaf sandwich. 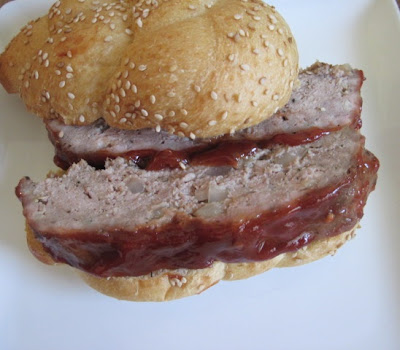 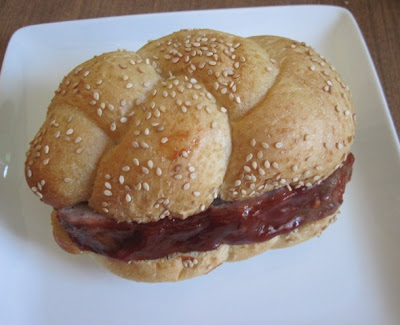 In fact I should share the recipe sometime. If only I had some kind of website where I put up recipes and pictures...
Email ThisBlogThis!Share to TwitterShare to FacebookShare to Pinterest
Posted by Bob Labels: random stuff at 6/01/2012 11:17:00 AM 0 comments