One day my girlfriend asked me to make her a smoothie. So I did. I don't really have a recipe for it since it was the first time I've ever made one and I really didn't feel like going online and digging one up. So I took a bunch of frozen berries, some yogurt, some milk and a bit of sugar and made her one. I did it like this.

First, I filled up a pint glass with frozen berries. 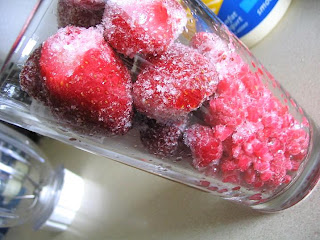 I've found frozen berries to be a bit tart and they wind up getting squishy or just disintegrating if you try to cook with them. They are easy to use in sauces because of that, but I wouldn't suggest trying to make a crisp with them. Anyway, I dumped them in the blender. 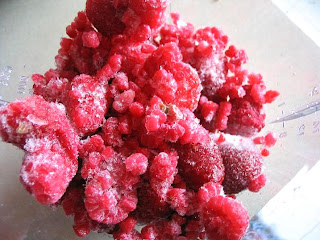 Followed them up with about a half cup of yogurt, about a half a cup of milk and a couple tablespoons of sugar. 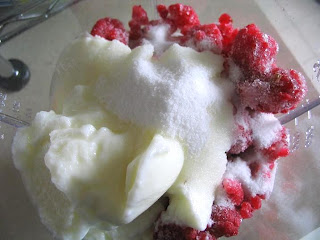 Then I just whizzed it up and poured it out. 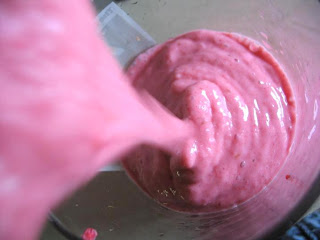 She enjoyed it very much. A bit of vanilla wouldn't have hurt, or fresh berries. 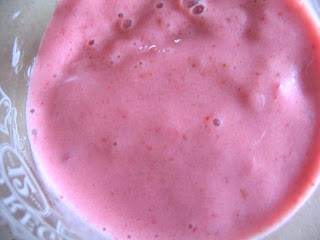 Or for that matter, a splash of vodka. Well, if it wasn't her breakfast anyway. Heh. Does anyone make smoothies on a regular basis? Any advice for a newbie? 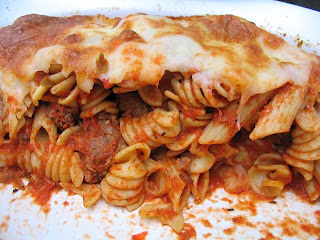 It was really good. But it made me want to do my one pot ziti wicked bad. No point to that little story, other than padding out the post a bit. Heh. Although if anyone has any advice on the baked ziti that would be cool too.
Email ThisBlogThis!Share to TwitterShare to FacebookShare to Pinterest
Posted by Bob Labels: berries, drink at 3/04/2009 12:00:00 AM

My only thoughts on the Ziti would be possibly to mix in a little shredded cheese, some parmesan for sharpness, and maybe some uncooked baby spinach (it's perfect when it wilts in hot pasta) before covering with cheese. Your home made pasta sauce sounds delicious!

I have never made baked ziti, so I'm sorry I can't offer any suggestions. Looks tasty though :)

my baked ziti would be pointless without some ricotta in there.

Love smoothies - all kinds. You gave me a good idea with the vodka splash. That sounds good right now :)

I could really go for one of those smoothies!!

I use frozen berries in crisp often. My family loves it!

Haven't made smoothies for a while... used to make them quite often. I put a couple dashes of cinnamon in my banana smoothies. My fave is blueberry smoothies and the color is gorgeous!

I eat smoothies every day for breakfast during the summer. That looks soooooo good!! I am missing them now. Ricotta cheese! You should mix it in when your mixing in the sauce, it makes it creamy and extra cheesy and so good.

How refreshing and yummy!

Julia: Good call! I bet the spinach would be great, I'll have to try that next time.

tamilyn: Never made baked ziti?! You should, it's the bomb. :)

Jennifer: So does my girlie. Heh.

5 Star Foodie: I aim to please.

Spryte: Really? I tried it once and it was terrible. What kind of frozen berries do you use? Do you do anything special with them?

Karen: Cinnamon would have been good. My girlfriend loves blueberries, but always eats all of them straight before I get to make anything with them. Heh.

I love fruit smoothies, and this looks delicious!! Frozen fruit rocks, as far as I'm concerned!!! I'm on a frozen mango kick!! I have always dreamed of making a good baked ziti, so I will offer no suggestions, and just wait, very patiently, for you to finish and post! :)

I love berry smoothies!! I need to get my blender workign again... The jar broke. :(

I make smoothies with fresh fruit and use complementary frozen fruit as a stand-in for ice. No yogurt, no milk, sometimes just a tad bit of juice. They're "pure" heaven!

I don't know Bob... pretty much whatever they have! I toss them with some sugar, a little almond extract and sometimes a little tapioca.

Smoothie: A little ice to thin it out. Yogurt's good for that too, but the ice adds to it a bit better.

In the end, there's nothing wrong with your versions. Simple, easy, good. The end!

And I would have enjoyed it too! I love anything that color!

I used to drink them everyday with soy protein...yum!

Chefbliss: I don't think we have frozen mangos around here, at least I've never seen them. Which is too bad, I would love some! Don't worry, I will be posting about my baked ziti. Just not sure when...

Culinary Alchemist: Bummer. I've actually learned that my jar is pretty tough. See, I was making frozen mudslides one night...

Spryte: I'll have to try it again then, maybe it was just a fluke last time. Thanks!

duo: Thanks for the tips! I was going to put more yogurt in it, but my girlfriend had wanted it really thick.

noble pig: Can't go wrong with protein. Although I usually prefer it in bacon form. ;)

There's that vodka again! (I'm catching up on my posts, newest to oldest). This frosty concoctions is going to look even better in about 3 months.