Look at my new toy! 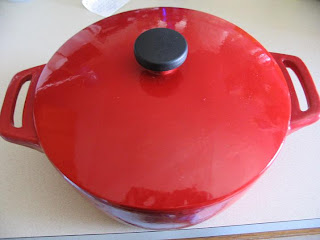 It's a six and a half quart enameled cast iron dutch oven. I've been wanting one of these for ages but never managed to get one, mostly because the ones everyone always said were the best were two hundred dollars a pop. I don't have that kind of money for a pot. But this one was only fifty bucks and it's Cook's Illustrated's best buy! They said it was just as good as Le Creuset at a fraction of the price. But I don't know what to do with it first. I'm thinking pot roast, since I have one in the freezer. Anyway, I'm sure you are all much more interested in the vodka.

But before you get any, go vote for Emily from Sugar Plum to win the Quaker Oats Viewer Quickfire Challenge! Whew, that's a mouthful. But you all know her and know she's the bomb. So go show some blogger love.

Anyhow, I love ginger. But when I buy it fresh (the best, hands down) it tends to get nasty before I finish off a whole chunk. I heard a while ago that if you peel it and store it in vodka it keeps for a really long time. Plus you get ginger infused vodka. That's win-win as far as I'm concerned, so I figured I'd give it a shot. Get it? Vodka? Shot? Eh?
*crickets*
Fine.
We'll just move on.
Here is what you need. Ginger root, vodka and a glass container that has a tight fitting lid. You could probably use plastic, but I wouldn't. Something about storing infused vodka in plastic tweeks me out, I'm not sure why. 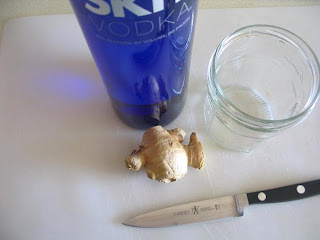 You'll also need something to peel with, of course. Anyway, this couldn't be more simple. Well, unless you didn't have to peel the ginger. But you do. So that's what you should do. But first, the obligatory arty shot. 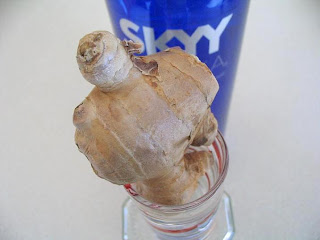 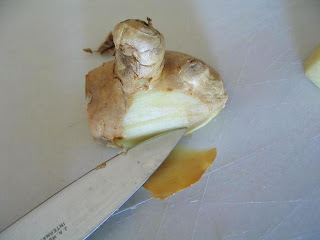 I did it in big chunks, although I don't remember if that was how I had heard about it being done. 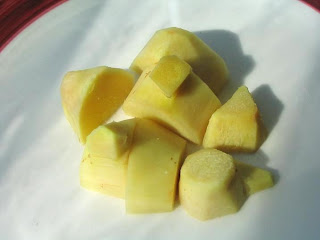 But I figure it will work out better later on when I just want a piece for a recipe. Man, do I love fresh ginger. Let's have another look. 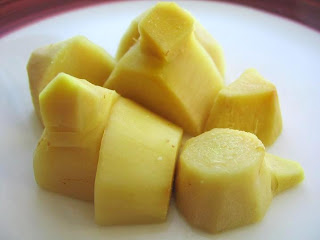 Good stuff, kids. Then I plopped it into a jar. 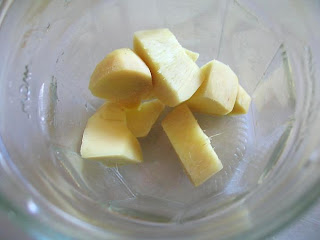 Now, I've been cooking since I was a little kid, but I really started getting creative with it when I was a teenager. And ever since then I have dreamed of a recipe that had "now cover it with vodka" in it. I think that this, while not a recipe per se, fulfills that dream. Because now you cover it with vodka. 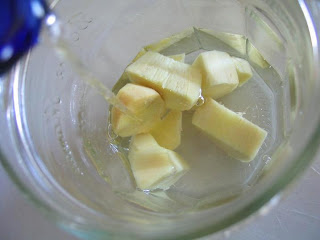 You should really use a good one for this if you are planning on drinking it (and why wouldn't you drink it?). I guess that should go without saying, but I'm sometimes surprised at what people will drink. I just filled the whole jar up. 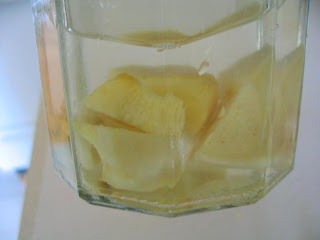 And that's it. The ginger will keep, I'm told, for months, recipe ready. And after some time (I'll let you know how long it takes UPDATE: it takes at least two weeks. Longer is better.) you have ginger infused vodka. I'm thinking of making faux-mojitos (fauxitos?) with it in the future. I have all kinds of other ideas for what else I'm going to do with it too.

Email ThisBlogThis!Share to TwitterShare to FacebookShare to Pinterest
Posted by Bob Labels: booze, random stuff at 3/06/2009 12:00:00 AM

That's a great idea for storing ginger. Did you taste that ginger-infused vodka yet?

Nice dutch oven, Bob! I need to get around to getting me one of those. And a place to keep it. What brand is it?

As long as you are going to use the vodka, otherwise that would just be alcohol abuse!

I've heard storing it in the freezer and lopping a chunk off when you need it works too.

But then you wouldn't have that nice infused vodka, would you....?

New toys are always so much fun!

How funny is this? I have a ginger post today!! Thanks for sharing, I had heard about the vodka but not tried it. Can't wait to hear about the results...over time!

And enjoy that beautiful dutch oven!! That is so high on my list of needs right now!! :)

What a neat idea! I hadn't heard that before. I shall have to try it...

I am curious how the strength of the ginger changed after time...alcohol leaches out flavor usually, and it had to be kept in a dark space, so could you let me know a time line of this, thanks email: elizabeth@cookappeal.com

My word! Does that vodka ever sound tempting. And thanks for the tip on storing ginger! Love it!And I love the color of your new toy. Wish I had one!

5 Star Foodie: Not yet, I actually just did it yesterday. This was almost real time blogging. ;)

tamilyn: I've heard of freezing it too, but this method just called to me. Heh.

Guiltless Glutton: Let me know how it works out for you, I'd love to know.

I am really curious as to how the Fauxjito turns out... :) A most excellent idea!

are those the working glasses from crate & barrel? I have those and love them. did you get the lids too?
I love my dutch oven, best thing I've ever bought. now you can make that no-knead bread everyone makes here in food-blogger land.

Yay!! For the Dutch oven, can't wait to see what deliciousness you cook up in there. And ginger vodka... yum...fauxitos, here I come, yum!!

Wow, thanks Bob! I didn't realize you were going to mention the contest. That's so nice of you.

First off - congrats on the dutch oven! I don't have one but I hear they're sooo nice to work with.

Second, ginger infused vodka sounds great. You could make Asian or tropical cocktails with it. Mmm.

Culinary Alchemist: Thanks, I thought it was too. ;)

Dawn: Heh, actually that's a jar from Bon Maman raspberry jam. I am planning on making that no knead bread though, it's one of the reasons I wanted a dutch oven.

Reeni: Well stay tuned, Soon I will be doing all kinds of stuff with it. While drinking fauxitos. ;)

Emily: No sweat! Yeah, I'm excited about the vodka. I was also thinking of doing some kind of noodle dish with it. Something light and maybe chilled.

Let me get this straight: I can keep from wasting a perfectly good ingredient, have a means to have it handy at all times for recipes and end up with a delicious adult beverage for my efforts? Hand me the bottle . . . !

I'll be interested to know how long it takes before the vodka is ready to drink. Not a whole lot a patience with that sort of thing here. :-)

great idea. I have a large chunk of ginger root sitting in my kitchen just waiting to be peeled and dunked in a vodka bath!

I've always wanted a dutch oven! Was thinking of getting a Le Creuset but it's just so expensive. Which brand is this?

About what I used to take pictures in the restaurant, I used my Canon 450D, with a 50mm lens.

You know... my leftover ginger withers... then I toss it away. I need to pick up ginger tonight... if I have any left.. it's going into vodka!

Just saw your link on Foodista-