Sunday Cats and a Wrap

Before we get to the cats, here's a shot of a killer wrap I got from a local restaurant a while ago. 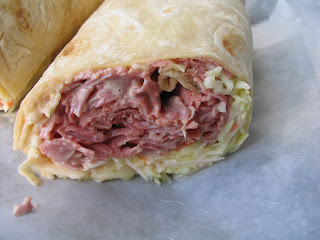 It's called a New Yorker and it's basically a Rachel wrap. For those of you who don't know what a Rachel is, it's basically a Reuben with cole slaw instead of saurkraut and sometimes pastrami or turkey instead of corned beef. This one is corned beef, cole slaw, Swiss cheese and thousand island dressing. Not kosher, but wicked good. I'm going to be recreating it at home some time soon with all homemade parts. I'm thinking of even doing a flat bread for it, although I probably won't corn my own beef. Maybe though. Anyway, on to the cats.

So this is it. My last post from my old blog Bob and Noodles. This means from here on out I'm going to have to actually come up with new cat posts every Sunday. Next week I'm going to introduce you guys to my brothers cats (the non-kitten ones). I was going to do it this week, but my cameras batteries died while I was trying to copy over the pictures. It worked out fine though since I have just one more old post to put up.

Good thing I don't have any readers here. Heh. Well, here are some random pics. I actually lost hundreds of pictures (yes, hundreds. I take hundreds of pictures of my cats. I'm not ashamed.) to an emergency hard drivereformat recently, so these are all new. Since it's been so long I will even give little explanations. Woot!

So, Noodles likes to cover her nose with her tail. Kind of like a fox. 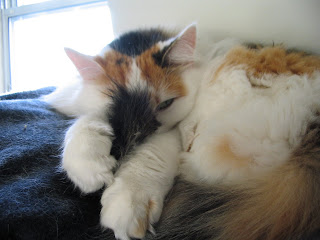 For some reason she decided to hold it in place and sit like that long enough for me to get the camera. It might be the most cooperative she has ever been.

My girlfriend refers to Bob as "her big, living stuffed animal". This is why. 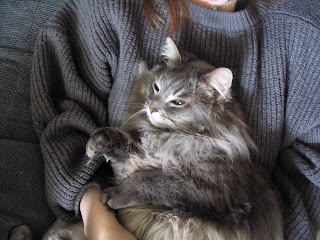 He'll just lay there, being held, 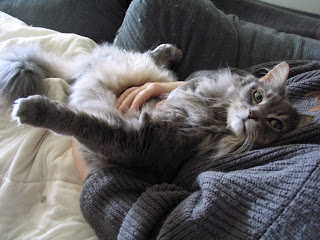 and making happy-cat faces for whole stretches of time. 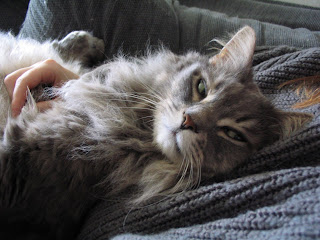 Noodles likes getting under my girlfriends flight jacket. 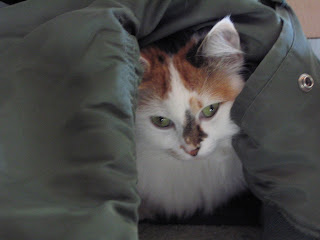 I don't know why Bob sat next to her, but it's like "Housecat Gothic" or something. 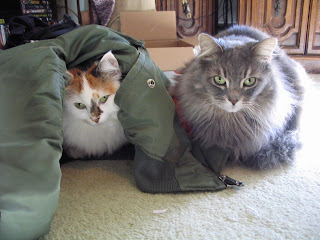 Then Bob heard something. 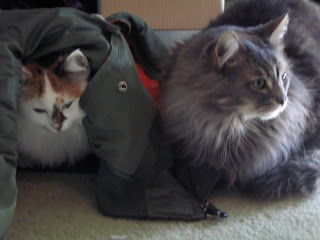 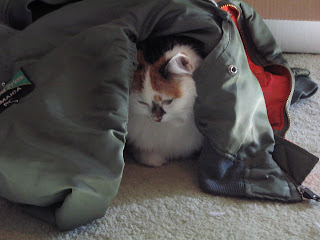 Email ThisBlogThis!Share to TwitterShare to FacebookShare to Pinterest
Posted by Bob Labels: cats, sandwich at 3/29/2009 12:00:00 AM

the wrap looks so delicious!! The cats look cuddly and cute. Thanks for sharing!

LOL! what did Bob hear? Love it.
After seeing that wrap I wish I had some leftover corned beef to make some hash.

so sweet! I love your little section on your cats.
btw, I can't wait to read about your recreation of that wrap. You'll be my hero if you actually really corned your own beef. but making your own wrap sounds ambitious enough already!

burpandslurp: I think I am going to corn a beef. I've been doing a little research and it looks totally doable. At least if I can find some saltpeter...

Not Another Omnivore said...

I just got my kitten! I love her.

That tail in front of Noodles face is so funny. Like she's trying to hide or maybe she's checking to see if her tail smells, ha. I love Noodles!!! And Bob, too, of course. But Noodles has such personality.

Bob is just about the sweetest, placidest (<--neologism warning) creature I have ever met. And considering that I have been involved with the shelters at the MSPCA for about a decade now, that says a lot.

It think it may have something to do with that glass of scotch he drank as a kitten.

As for corning beef, I have been thinking of doing that for a few years. I have a couple of handles on some people who can set us up with fresh briskets, and I have a good basement...

Followup: The preserved product I really want to get a fork into is mincemeat, but I keep forgetting to get it started in June for use in November. I have a ridiculously good looking recipe I got from some Shakers in Maine, but the timing is rough.

Brutal: I'm not really a mincemeat fan, but I would love to do a joint venture on the corned beef. A lot of recipes I've seen for it cure it in the fridge, but I also have way more research to do.

Love the cats and this wrap looks really, really good!! I can't wait to try it!

I can't get over how much Bob looks like my Thumper kitty! (as in my photo icon there)

Hey, did you see you were featured on Finest Foodie Fridays ... check out No Fear Entertaining blog! Congrats!

The Rachel wrap looks delish but Noodles and her saucy peek-a-boo look is a winner!