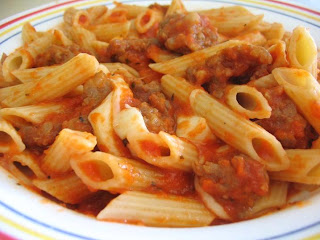 Brown and crumble the sausage, remove it to a paper towel lined plate, cover it and put it in the fridge. Remove all but a tbl of the fat from the pan and brown the onions. Add the garlic and saute till aromatic, about 30-40 seconds. Add the bay leaf, basil and oregano and saute for 20 seconds or so. Add the vinegar to deglaze, then add the tomatoes. Dice the pepper and add it in as well. Let simmer for at least an hour or up to 3. If you want it chunky you can hit it with a potato masher a couple times, if you want it smooth hit it with a immersion blender. Add the sausage back in and let it simmer for another half hour or so. Add salt and pepper to taste, serve over pasta.

This was a request from my girlfriend a couple days ago. It's probably the favorite pasta sauce for both of us. The roasted red peppers add a great sweetness to it and something about Italian sausage and tomato sauce is just awesome. You can use spicy or sweet sausage in this, whatever you enjoy most. I use sweet because my girlfriend doesn't feel it for spicy and she does the grocery shopping. If you want it chunky you don't have to hit it with the blender, we just like tomato sauce smooth. Plus if you leave it chunky you don't have to leave the sausage out till the end, unless you don't want pieces of sausage. Anyway, here is what I did.

First I roasted a pepper. I love roasted peppers, they are just awesome. This one was pretty big. How big? Bigger than a can of tomatoes. 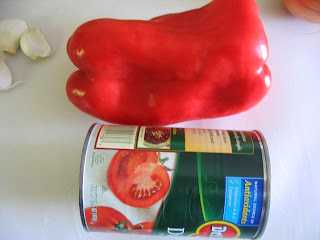 I like a lot of pepper flavor in the sauce. If I had only had small ones I would have used two. After roasting, I sliced off the top and bottom, took out the seeds and spread it out for slicing. 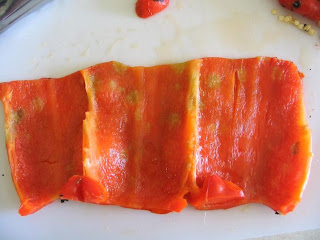 Of course that's the only thing I got a decent shot of. Then I cut it into chunks and set it aside. Next I browned up the sausage. 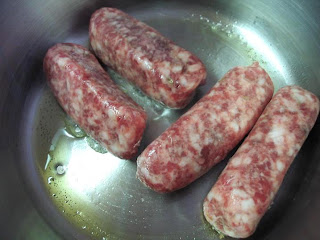 I had taken these out of the casing to make crumbling easier. 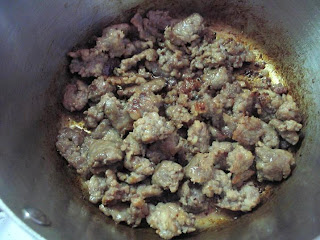 Once they were all nicely browned I pulled them out. I put them on a paper towel lined plate to soak up any excess fat (there was more than enough left in the pan, too much would over power the other flavors) then tossed it into the fridge since I didn't want to let it sit out for the whole cooking time. 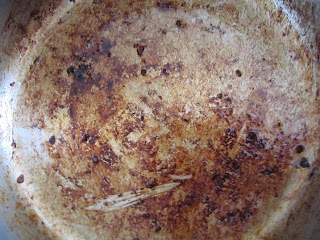 Mmmmm, that's one fondy pot. It's going to make the sauce nice and rich. Browned up the onions, 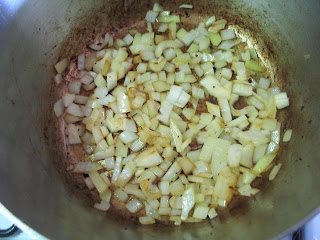 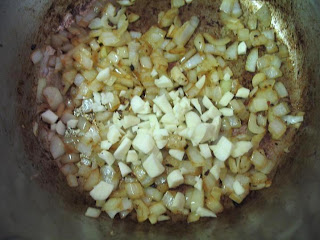 I didn't worry about mincing the garlic too fine since I was going to blend it, but if you are leaving it chunky you might want to make the pieces smaller. Or leave them big, if you like big chunks of garlic. Once the garlic was done I added in the spices and sauteed them for a minute. 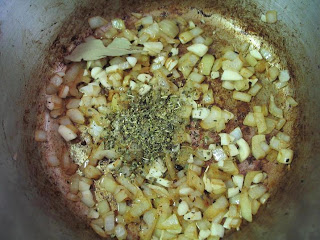 This helps bring out the oils from them, which brings out the flavor. Then I deglazed with the vinegar, although I didn't get a good picture of it. Red wine would be good too, but I didn't have any. Once I had scraped up the fond I added in the tomatoes. 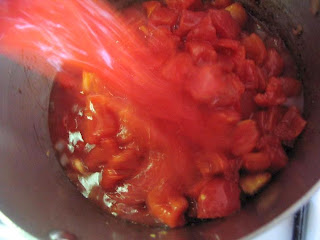 Then the pepper chunks. 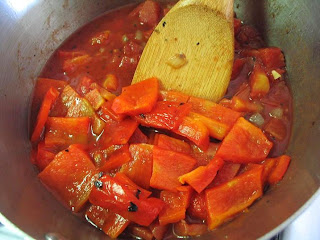 Then I let it simmer for about an hour, making sure to stir it every once and a while so it didn't burn. 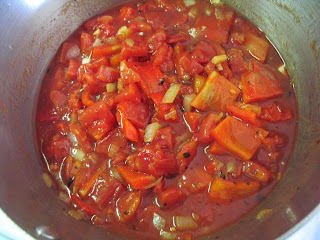 I would have done it longer, but I had to be at work in a couple hours. Don't forget to take out the bay leaf! 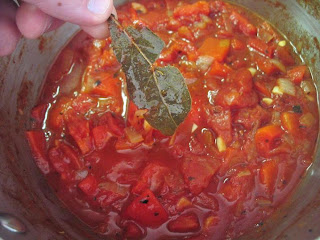 I didn't want it in there when I blended it with the wand mixer. 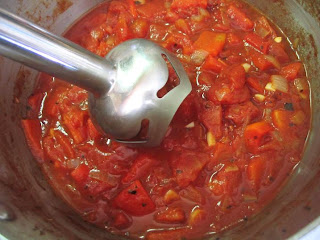 Blending it makes it nice and smooth, 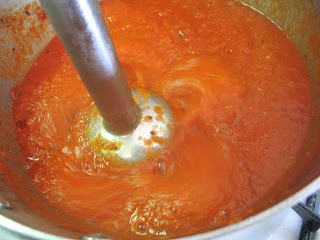 helps it cling to pasta. 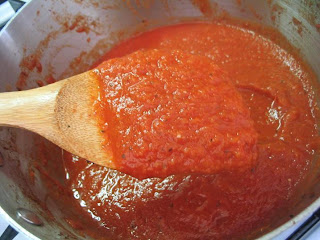 Then the sausage went back in 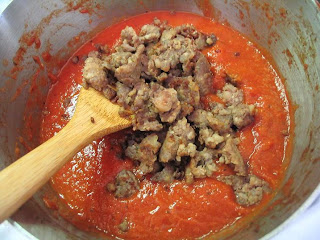 and I let it simmer for another half hour or so to let the flavors mingle. I added a little black pepper, but it didn't need salt since the canned tomatoes I used had plenty in them. And that's it. Some pasta, 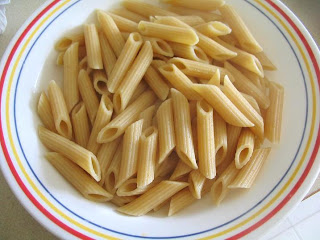 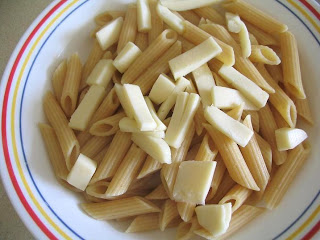 and a goodly amount of sauce 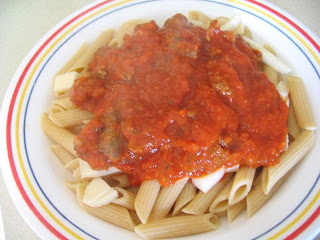 and you have a meal. 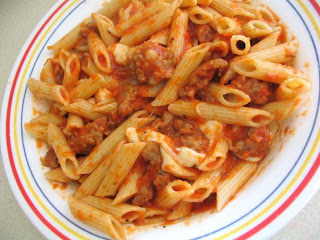 Good stuff folks. A little cream in the sauce would have been good too or some parmesan. Add a little extra richness. Not that it really needs it. Heh.
Email ThisBlogThis!Share to TwitterShare to FacebookShare to Pinterest
Posted by Bob Labels: italian-esque, pasta, pork, sauce, sausage at 3/22/2009 10:28:00 PM

Another manly meal from the "sisterhood?".
You are a very secure guy!

This pasta sounds delicious - I love this combo of peppers, tomatoes and sausages with pasta! YUM!

You are so right...the roasted peppers do the duty! It's extra spicy with a few red pepper flakes in there too. Great sauce for any pasta.

I, too, like a smooth sauce-I have a strange problem with texture in my food. It is only one of a host of issues I have, but whatever. This sounds like a nice, zippy sauce I could really enjoy. Now where is my immersion blender?

Very delicious and again makes me regret losing my wand many moves ago!!!!

you have a boat motor! I would love one of those bad boys.
I like my peppers roasted too; that flavor is so good.
I love that you guys love italian sausage I can't get my hubby to eat it, and I buy the good stuff at whole foods. if you ever go to whole foods you must try their sweet italian sausage--it is the fruit of the gods!

Those immersion blenders are awesome, and not so expensive as to be a luxury. You can get an entirely serviceable version on Amazon for $30, and for the work I get out of mine there is no question of cost-effectiveness. Especially if you like soups (which I did not so much until a few years back), or smooth sauces. Indispensable kitchen tool.

I'm so hungry! This is the second yummy pasta dish I've seen... in a row! I'd use the boat motor on it too... nice and smooth!

Stacey: Thanks! Heh, I am pretty secure in my manliness. Even though I make quiche. ;)

5 Star Foodie: Thanks, it's one of my favorite combos too.

duo: Yeah, it's another thing I would love to make spicy, but my girlfriend won't have it. Not that it stops me from putting some flakes on my portion...

tamilyn: I'm also pretty picky about textures. One of the great things about doing all the cooking is I get to make it all my way. ;)

ChefBliss: Thanks! I got my wand as a gift and if I lost it I would definitely be buying another.

Dawn: Oh how I wish I could get to/afford to shop at Whole Foods. Everything I have ever had from there is awesome.

Karen: Heh, rereading it makes me wish I had leftovers. :)

Fantastic sauce! And sausage is a must! I like mine smooth too!

Pasta and sausage, yum. I bet it's great with roasted peppers--I'm gonna give this one a try.

I want to scoop this up with a giant piece of garlic bread! OMG.

Reeni: Thanks! We should start a smooth sauce club. Heh.

unconfidentialcook: Let me know how it turns out for you!

noble pig: Heh, at one point I caught my girlfriend standing over the pot while it was simmering with a slice of scali bread.

This is the perfect sauce! I really need to break out my immersion blender for more than just cream soups.

I know this is the least topical comment you may have ever received aside from spam, but my favourite part of this post was this: "I love roasted peppers, they are just awesome. This one was pretty big. How big? Bigger than a can of tomatoes." For some reason, I love that. Dinner doesn't look too bad either. ;)