How to Make Homemade Vanilla Sugar: Phase One

I have a couple vanilla beans that I had been kind of sitting on, waiting to do something cool with. 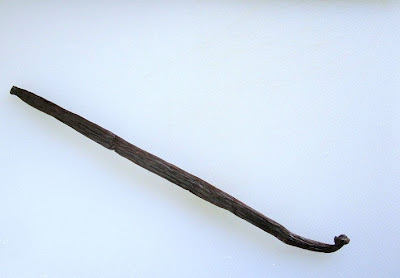 But as much as I wanted pastry cream or a good vanilla mousse, that's just not happening with the work space I have now. So I decided to make vanilla sugar, it's easy and keeps forever, that's exactly my speed these days. Heh.

At least this is pretty much what I remember him saying. 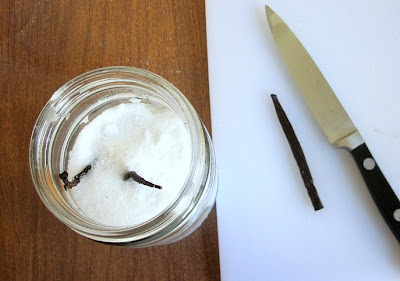 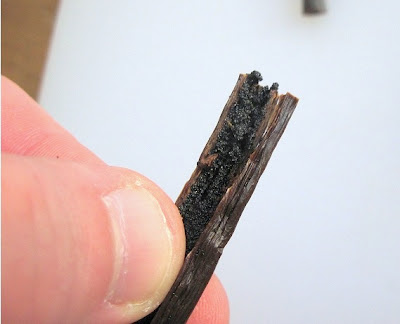 I cut up the vanilla pod into quarters, didn't bother to scrape most of the seeds out since there's going to be shaking on a regular basis. And I just stuck it all in a glass jar together. 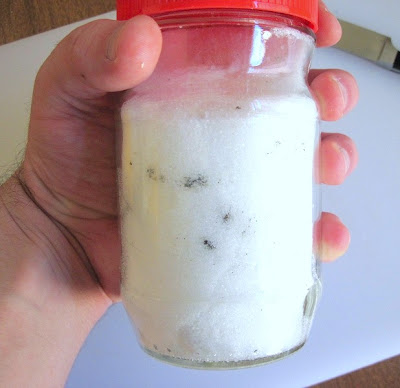 Now I'm going to leave it mostly alone for a couple weeks, shaking when I feel the need. And we'll see what happens. Further updates as events warrant.
Email ThisBlogThis!Share to TwitterShare to FacebookShare to Pinterest
Posted by Bob Labels: sugar, vanilla at 12/29/2011 12:48:00 PM 0 comments

Uhm, excuse me? I was reading that. 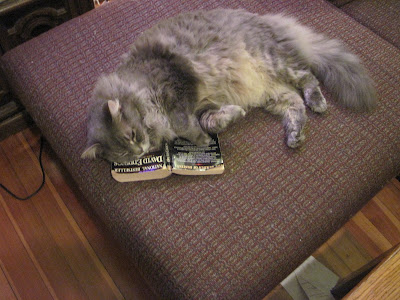 I only put it down for a minute. 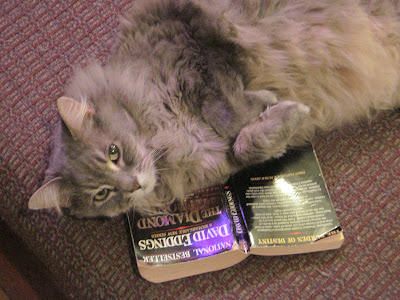 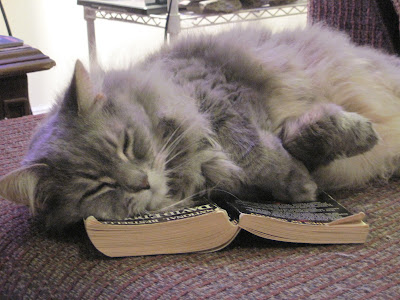 My cat is a jerk.
Email ThisBlogThis!Share to TwitterShare to FacebookShare to Pinterest
Posted by Bob Labels: cats at 12/18/2011 08:56:00 AM 3 comments

Ok, first off, I'm not in or from or even been to Philadelphia. This isn't pretending to be a Philly cheese steak. 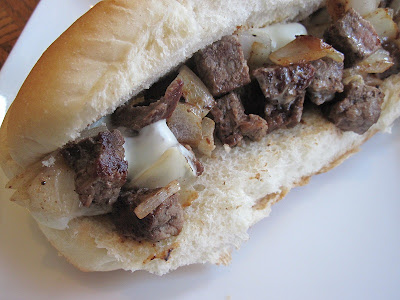 All right? All right. So.

I love steak and cheese subs. They are the awesome. The biggest problem I have with them is if you get them delivered, by the time they get to you the bread is soggy with grease. As is the wrapper, the bag, the driver and the seat that it was sitting on. Even if you get take out, a similar problem is had only with you instead of a driver.

There are two ways to avoid this: eat in the shop (not my favorite) or make your own (clearly my choice). Also, if you make you own it doesn't have to be quite so greasy because you don't need to use that weird ass shaved steak that sub shops use. I use cube steak, cut into... er, cubes. I don't feel like writing a recipe, so I'm just going to show you what I do. It's not hard, there's only six ingredients and it takes but moments.

First, chop up a bunch of onion, your cube steak and anything else you want in there like peppers, mushrooms, pepperoni or what have you. I have no picture, just close your eyes and use your imagination. Done? Ok.

Then heat up a skillet nice and hot. Here's part of the trick to less greasy, I use anodized aluminum. If I used steel I'd need tons of oil, you can use non stick too but you don't get as good browning with it, although cast iron is best of course. But I love anodized aluminum. Now, toss the steak on there and let it sit for a minute. Some salt and pepper at this point would be a good idea. 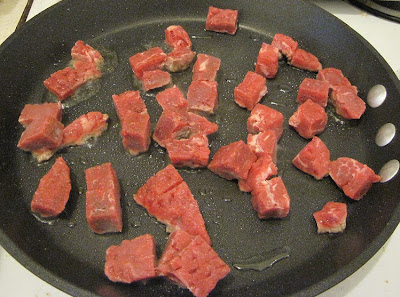 You want it to start to brown before you put the onions in because the onions (and whatever else) are going to put out juices that might stop it from browning more. 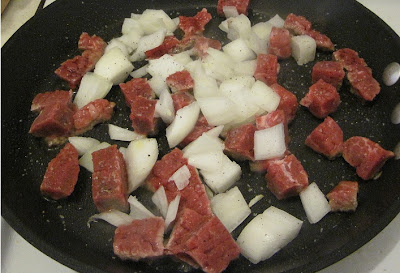 And brown is beautiful folks. 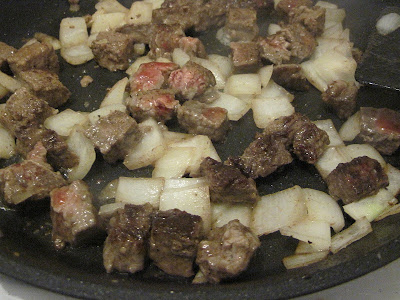 So once the onions are in there, toss that stuff around, let it sit and... well, that's pretty much it. Stir it a couple times, maybe, but it's going to cook real fast so you might not even need to. Once it's done form it into a sub shape, put some cheese on top 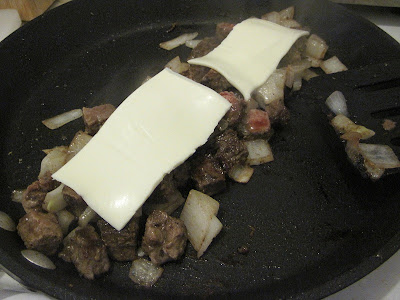 (whatever kind you like, I'm from Boston so it's American all the way) and let it melt a bit. Then plop it on a roll. You have now completed a less greasy steak and cheese. 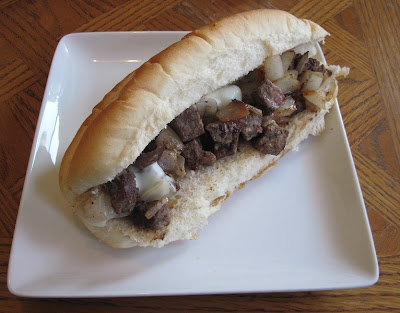 I strongly suggest you eat it.
Email ThisBlogThis!Share to TwitterShare to FacebookShare to Pinterest
Posted by Bob Labels: beef, cheese, onion, sandwich at 12/12/2011 11:56:00 AM 2 comments

So, who out there thinks that it's a coincidence that my favorite spot on the couch is also the real Bob's favorite spot? 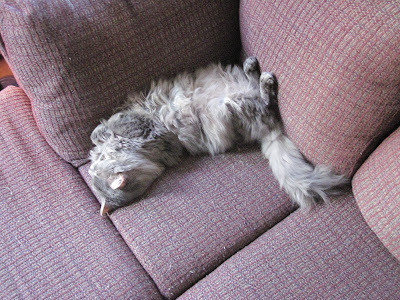 You'd think that since I'm living alone, well, without other humans, I'd get my pick of where I sit. 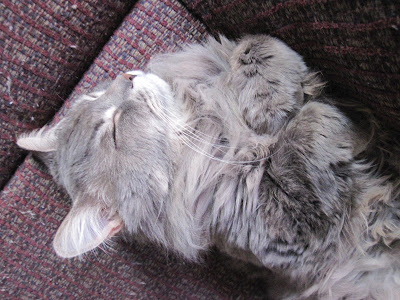 You'd think that. Yeah, enjoy it. 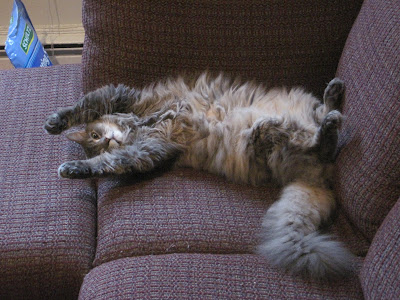 Email ThisBlogThis!Share to TwitterShare to FacebookShare to Pinterest
Posted by Bob Labels: cats at 12/04/2011 09:22:00 AM 2 comments

Just a quickie today kids, I'm not even telling you about the butterflied leg of lamb I got the meat (and fat) for this from. Saving that for next week. But this was good. Really, really good. What I did was took the fat cap off the cooked leg of lamb, chopped it up, rendered it up and poured off the fat and cracklins (mmmm, cracklins). I got some good fond, deglazed that with some weak chicken broth, poured that off, added some of the fat back in and sauteed onions and garlic in it.

Then I cooked the rice like you would for any other pilaf (would have added orzo, but I couldn't find it, stupid unorganized kitchen), plus some salt, pepper and a little oregano, added the chopped up cooked lamb at the end and... well, that's it. Except I added the cracklins back in. 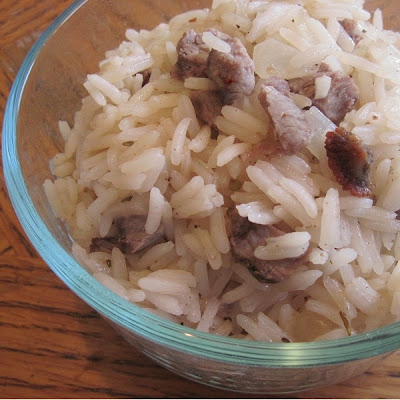 Because I'm a madman. It was as unctuous as a dictator's sycophant, with little bursts of rich lamby goodness from the cracklins. I just love saying that, say it with me, "cracklins". Good times. If you like lamb, send me an email and I can try to make up a recipe for it.
Email ThisBlogThis!Share to TwitterShare to FacebookShare to Pinterest
Posted by Bob Labels: lamb, rice at 12/02/2011 09:59:00 AM 0 comments