I miss Noodles. I'm not going to pretend that I don't. So, here is a repost with her involved.

I was going through my rather immense folder of cat pictures looking for stuff I haven't posted and came across these. 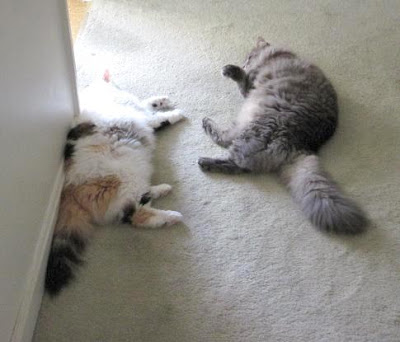 This was at our last apartment and they loved to lay there in front of the bathroom door. 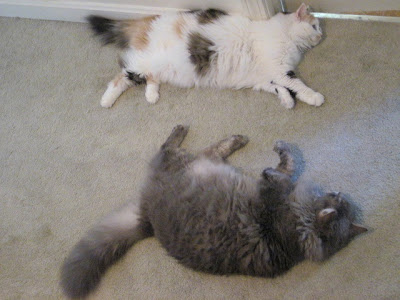 They didn't often do it together though, which is why I took pictures. 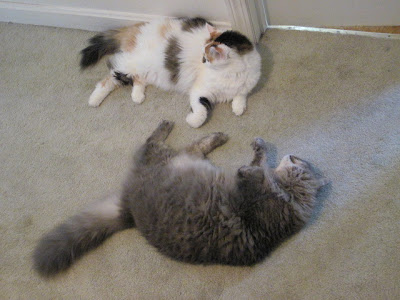 My (ex)girlfriend thinks they liked to be there because it was halfway between the kitchen and the living room, so it was the closest they could be to both of us when I was cooking and she was watching tv. Heh.
Email ThisBlogThis!Share to TwitterShare to FacebookShare to Pinterest
Posted by Bob Labels: cats at 10/30/2011 08:59:00 AM 2 comments

I Know, I Know

I'm a bad blogging guy. I made promises of a post related nature and didn't then actually, you know, post. To partly make up for it here is a picture of tuna noodle casserole. 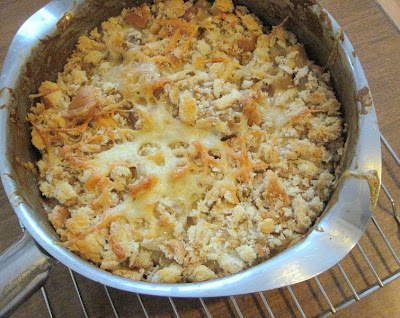 No recipe, just the picture. I don't feel that bad. Heh. And I don't have a recipe for it, I just put a bunch of stuff in a pot (it's one pot too!) and then baked it. On allergy medicine. So my memory is a bit blurry, although I do remember it was wicked good.

Another way I'm going to make up my post shortfall to you guys is what I'm making for lunch right now. It's pizza, inspired by a ridiculous sub called steak mafioso. It is also wicked good, I'll be posting about it Monday. Or Tuesday. Probably. Here's another picture of the casserole. 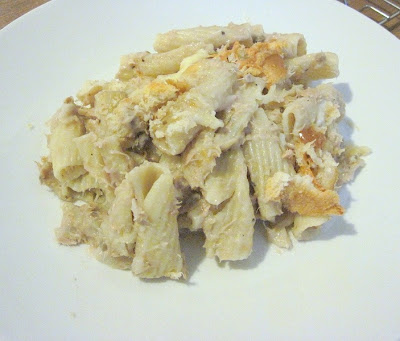 Thank you for your time.
Email ThisBlogThis!Share to TwitterShare to FacebookShare to Pinterest
Posted by Bob Labels: casserole, comfort food, fish, tuna at 10/29/2011 10:36:00 AM 2 comments

Ack! It's Sunday, I've been so busy cleaning (and sleeping) that I forgot I was trying to post regularly again. So, here is the real Bob sitting in my lap being sweet. 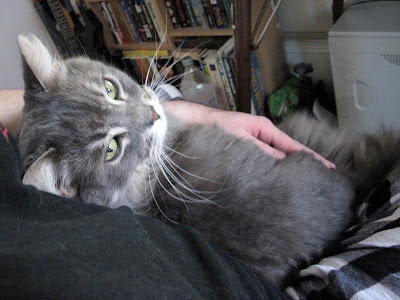 He gets a lot more lap time now that I'm single. Heh.

And here he is getting indignant that I moved and pointed the clicky box at him. 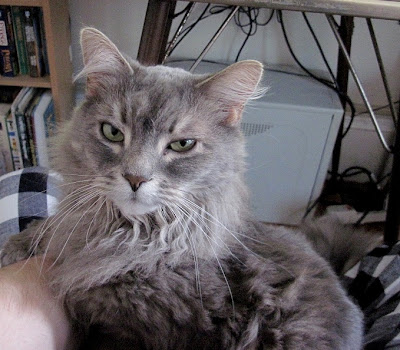 Then he left. Drama queen.

But this week I have two posts to put up! Surprised, aren't you? Something sweet and something, uhm, not sweet. Lemony? Not savory... I dunno. Good. It's a sandwich. You'll see later.
Email ThisBlogThis!Share to TwitterShare to FacebookShare to Pinterest
Posted by Bob Labels: cats at 10/23/2011 12:32:00 PM 2 comments

Adapted from this recipe by Pioneer Woman 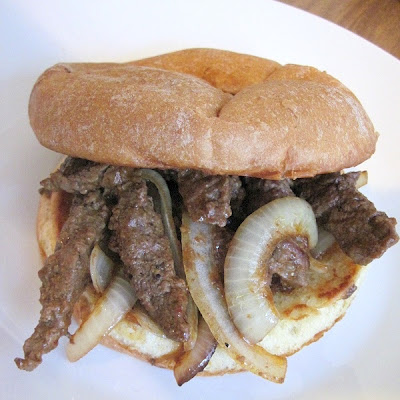 1 lb cube steak
1 small onion, sliced
1 tbl butter
1 tsp worchester, soy or some other brown umami bringing sauce
hot sauce and plenty of it
salt and pepper to taste
pinch each of:
cumin
chipotle powder
garlic powder
(all powders are optional and to taste)

Toast a couple rolls, if your into that. Then saute the onions in oil or bacon grease (not the butter, that's for later). While that's going, slice the cube steak against the grain and toss it with the seasonings. Once the onions are done remove them from the pan and wipe out the excess grease, if you want. Add the butter and let it start to brown then add the steak in one layer and leave it alone till it browns. Then flip it. Add the brown and hot sauces and the onions. Stir everything around a bit and let it sit for a minute. Put it all on buns and eat.

Look, a recipe! Not that I can really claim it as my own since it's pretty much the same as the one PW made. But still, it's there, I posted it and it's frigging awesome. I did things a little different than PW, mostly because her kitchen is the size of my apartment so I can't do so many things at once. But you can do it any way you like and I'm sure it will kick ass, it's a great method for a great sandwich. Here is what I did.

First, I toasted (fried?) the roll in a little bacon grease. 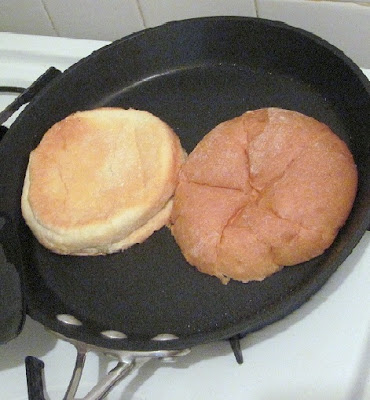 Because it's the bomb. Then I sauteed the onions, although there isn't a pic of that, so feel free to use your imagination. But while I was doing that I dealt with this. 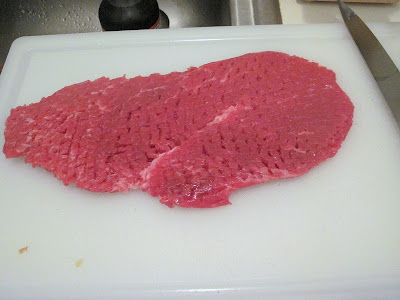 Cube steak. I had never used it before and was shocked at how inexpensive it was, this was about a pound and it was about a buck. Not too shabby since I got two meals out of it. Now, slicey slicey, season, season. 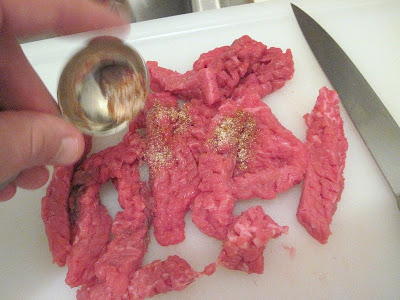 Although you could use any seasoning you want including just some salt and pepper. I've just been on a big chipotle kick lately. Then, of course, butter. 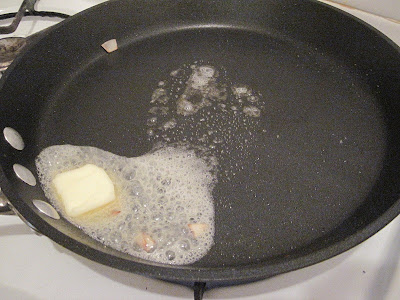 Ms. W used about, oh, 10 pounds I think. She cooks like that, cooking for kids and cowboys and all. She was also making more than one sandwich. I just used a tablespoon, moderation is a virtue you know. Then it's browning beef. 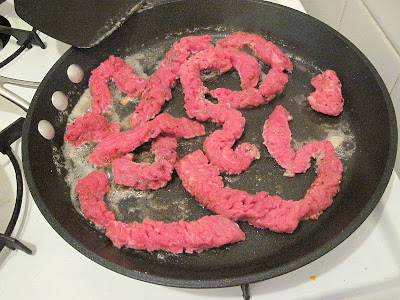 Mmmm, look at the buttery juices. 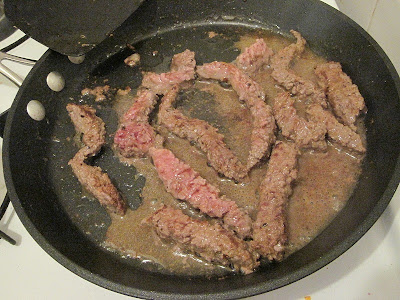 Look at them! Once it was mostly done I added my hot sauce. 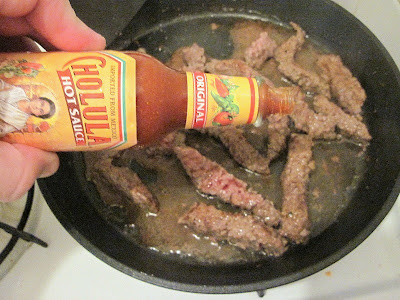 This is actually part of a free sample from Cholula who didn't pay me but wanted a review. (disclaimed) Review: Cholula kicks ass. Course, I've covered that before. Heh. I added a lot, because I like a lot. You can add as much as you like. Then the onions go back in, 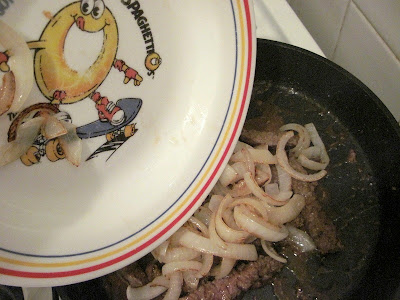 mix it around, let it sit for a minute and that's it. 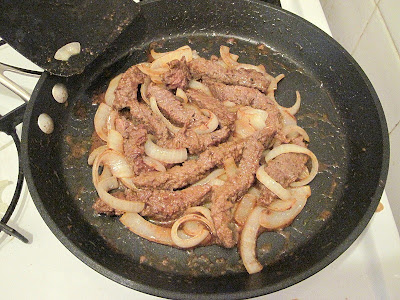 Put it on a bun and eat it. 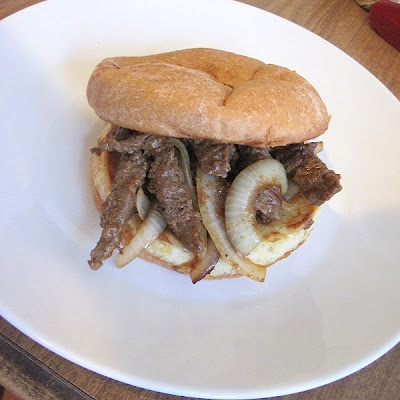 It's wicked good. Now you could do this with things other than beef, I assume. I don't see why you couldn't do it with pork, chicken, fish or even (shudder) tofu. Try it, love it.
Email ThisBlogThis!Share to TwitterShare to FacebookShare to Pinterest
Posted by Bob Labels: beef, onion, sandwich at 10/17/2011 09:00:00 AM 4 comments

Wow, it's been almost a month since I posted. Stupid life, getting in the way of my blogging. Hopefully this week I'll actually get around to posting some of the stuff I've done, but in the meantime here is the real Bob looking sweet (or possibly eager). 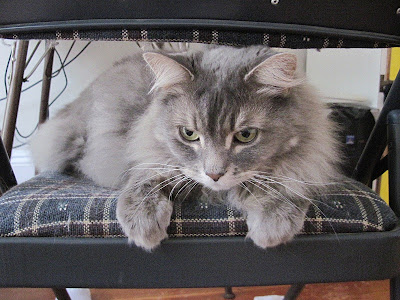 And here he is trying to destroy one of my socks. 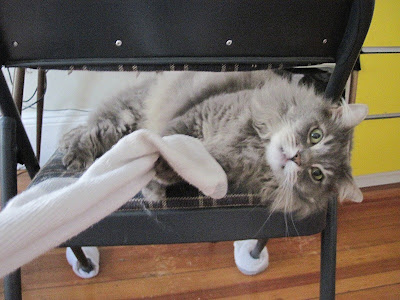 He is truly a cat of many facets.
Email ThisBlogThis!Share to TwitterShare to FacebookShare to Pinterest
Posted by Bob Labels: cats at 10/16/2011 12:29:00 PM 1 comments