Ok, quick disclaimer: I had written down this recipe but I don't know what happened to it. I'm reconstructing it from the pictures. 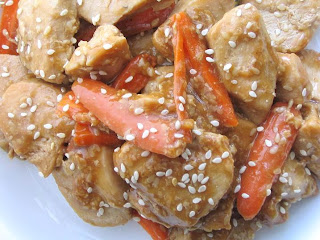 Mix together the honey, soy sauce, sesame oil, ginger and corn starch. Cut the chicken into bite sized pieces and stir fry till almost done. Remove the chicken and saute the garlic till fragrant, about 30-40 seconds. Add the sesame seeds and sauce. Bring to a boil then reduce the heat to low and let it simmer for 2-3 minutes. Add the carrots in and let them simmer till they are just starting to soften. Add the chicken, stir and let cook till done. Top with more sesame seeds if you like, serve over rice.

Like I said at the top, I don't know what happened to this recipe. I know I wrote it down while I was making it, but it seems to have disappeared. Which is a bummer since this was the closest I've gotten to what I've been going for with this. Like the title says, this is a recipe in progress. I wasn't going to post about it yet, but frankly, I've been wicked busy and I had the pictures. So there you go. Heh. I would love some advice from all you lovely folks though. It's good, but not great. It needs something, but I can't put my finger on what. I think marinating the chicken would help, but part of what I'm going for is a fast meal. As it stands it only takes maybe twenty minutes or so to make, which is perfect for a work night. Next time I think I might just mix together a little soy sauce, sesame oil and rice wine vinegar and just marinate it for maybe ten or fifteen minutes, while I do all the other prep. That should punch it up a bit. I would love to make it spicy, but then my girlfriend probably wouldn't eat it. Anyway, here is what I have so far.

First, the soy sauce. Half a cup of it. 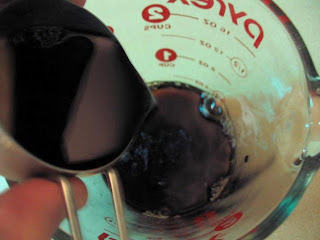 Low sodium is the best for this, then you can add more salt if you need it. Now honey. 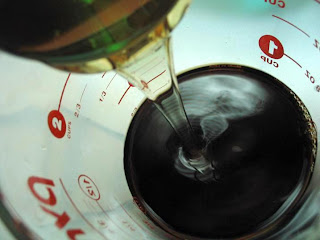 A quarter cup sounds like a lot, I know, but I like my sesame chicken sweet. And it still isn't too too sweet since the soy sauce is so salty, even low sodium. You could always cut it with some chicken broth if you want it less intense. Fortunately I took this picture, so I know exactly how much of each I used. 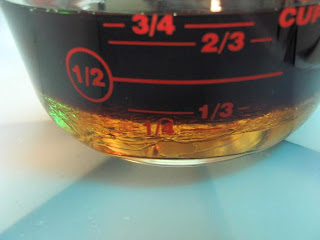 Plus it looks mad cool. Next I added powdered ginger. 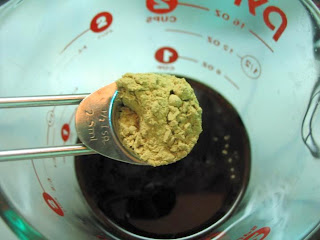 Fresh would obviously be better, but this was before I did my ginger vodka experiment and all I had was fresh. By the way, I used some of that ginger about a week and a half after putting it in the vodka and it still had plenty of flavor. Next went in some sesame oil. Then I added some cornstarch, but I really don't remember how much. 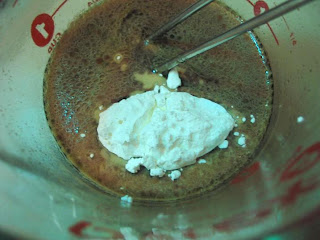 I'm guessing around a teaspoon. Whisked it to combine... 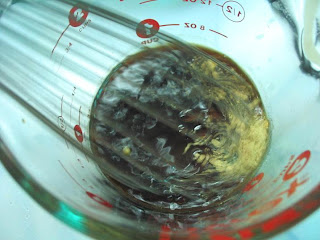 or at least tried to. I wound up using a spoon, I couldn't get the whisk to move around enough in my little two cup measure to get it to combine. Then I stir fried up about a pound of chicken that I had cut into chunks. 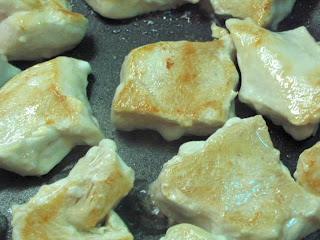 I would post pictures of that, but in all the ones I got the chicken looks wicked sketchy. I blame the terrible lighting in my kitchen. I'm asking for a light box for my birthday this year, I've had enough of this crappy lighting crap. Once the chicken was almost done, I pulled it out of the pan, wiped the leftover oils out of it and tossed in the seeds. 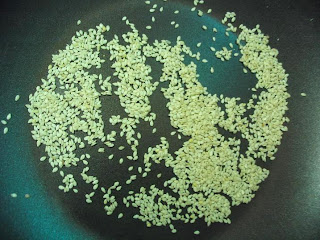 You can toast them however you like, I just already had a hot pan so I figured I would just use that. Once they were as toasted as I had patience for I added my garlic. 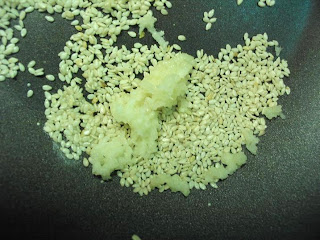 If you have fresh ginger you would want to add it now, instead of into the sauce. Sauteed that for a bit, then poured in said sauce. 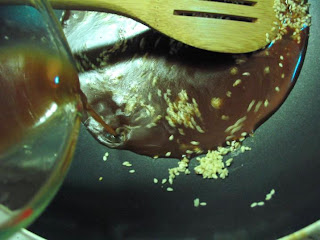 When I have cornstarch in a sauce like this I like to bring it to a boil to make sure it gets cooked right. That's one of the reasons I add it by itself, the chicken really doesn't need a boiling. Once it comes to a boil (I was stirring constantly the whole time it was coming up, don't need lumpy sauce) I reduced the heat to low and let it simmer for a minute, still stirring. Then I added the carrots. 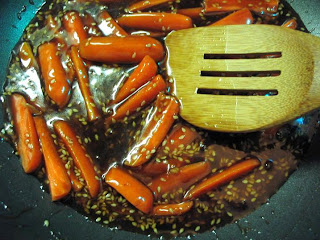 You could add them earlier, but as I'm sure you all know, I'm not a squishy veggie fan. I'm also not a big fan of fancy pants prep work, these are just baby carrots cut into fourths, not real julienne. Hope you aren't too disappointed. Heh. Then I just added the chicken back, tossed it around and let it simmer for a minute to finish cooking. 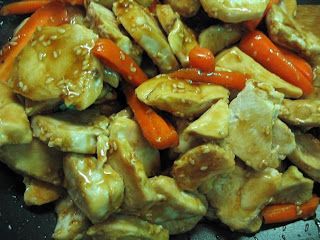 And there it is, sesame chicken and carrots. It would be good with some noodles or over rice. Like I said, it's ok, but it really needs... something. Any suggestions?
Email ThisBlogThis!Share to TwitterShare to FacebookShare to Pinterest
Posted by Bob Labels: asian-esque, chicken, experiment, main dish at 3/20/2009 06:00:00 AM

Have you had a chance to make this with ginger root instead of the powder? That might be the difference you're looking for.

Or maybe some rice wine vinegar?

It's good you took so many pics. I usually just take the finished product and then I'm at a total loss of what I did when I lose a recipe!

This looks wonderful, and very very flavorful!!! I understand losing the recipe, not fun, but the pictures speak volumes!

Bob,
I love any easy stir fry dish.
This looks terrific!
Will try it w/ the pwdrd ginger.

Have you tried adding a tablespoon or so of peanut butter to the sauce? It helps thicken and also adds good toasted nut flavor. Add too much and you have satay though...

The sesame flavors sound wonderful here from both the oil and the seeds! How about some cayenne?

I'd add some red pepper flakes, garlic and sliced green onion. That might give it the kick you're looking for :)

It looks mighty good from here! I haven't tried making this at home, but I love it. I was thinking rice wine vinegar and onion and maybe some red pepper after your girlfriend takes her portion?

Can't add any recommendations because I'm not that good at cooking on the fly myself! Looks really good already but if I had to choose something, I'd go with the suggestions to add something spicy.

A tangy, deeper, sweeter sauce with hoisin (or add brown sugar if you don't have it) plus more cornstarch to thicken. Green onions for flavor and color. Broccoli's good too. Definitely a few pumps of srichacha for spice!!!! If you really want to get the crunch of the chicken, bread it and fry it lightly first. That's totally not necessary though and adds more calories and fat than needed...but it'll taste good.

Good call, Reeni. I would totally have some mixed peppers and fairly large onion jullienne in there (but not for the girl, at least not the onions). Maybe steam them first, to keep the oil down. My wife is not a big fan of the green peppers, but some yellow and reds ones would go well with the sweet thing going on anyway.

I don't think I would use too much vinegar though -- you risk turning it into a sweet and sour. Not that that is a bad thing, just not what I want in sesame chicken :)

I do a lot of stir fries with hoisin based sauces, but in this case I think the heavier flavors might interfere with the sesame flavor. Broccoli on the other hand also sounds like a great addition to this.

A quick googling of "srichacha" did not come up with much -- is that a brand of chili sauce?

That's funny but I do the same thing...it looks wonderful and the sesame seeds are a welcome addition.

hey, a picture speaks a thousand words! I think its' more fun to cook on a whim! it looks awesome, though!

Looks like a great weeknight dinner when I'm in a rush (which is the case every night). I'd add some rice vinegar and maybe even some miren. Also, what about roasting the carrots, and also some broccoli to add some green?

Spryte: I haven't yet, and while I know it would be better, I think it still needs something more than that. Vinegar is a good idea. Thanks!

Joie: Heh, that's one of the reason I started taking so many.

Brutal: No I haven't, that's a good idea. I will try that out next time.

5 Star Foodie: I would love to put some heat into it, but then my girlfriend wouldn't eat it. I have some dried szechuan peppers that would have been great.

Reeni: Thanks! Yeah, vinegar is going in next time. I bet some onion would be good too, probably a sweet one.

Tangled Noodle: Yeah, it would be good spicy.

Duo: I would love to fry it, but my girlfriend would stab me. She is watching her calories. Heh. I love hoisin, but it's not really the flavor I'm going for in this.

Burp and Slurp: Thanks! I almost always cook on a whim, it's just more satisfying to me. Heh.

unconfidentialcook: Hmm, mirin would be good, but I'd have to cut down on the honey I think. Broccoli would be good too, I love me some broccoli.

Karen: Oops, sorry I missed you in the batch! Those are all good ideas, I bet the sliced green onions would be particularly good.


We bumped into your blog and we really liked it - great recipes YUM!!! YUM!!!.
We would like to add it to the Petitchef.com.

We would be delighted if you could add your blog to Petitchef so that our users can, as us,
enjoy your recipes.

Petitchef is a french based Cooking recipes Portal. Several hundred Blogs are already members
and benefit from their exposure on Petitchef.com.

To add your site to the Petitchef family you can use http://en.petitchef.com/?obj=front&action=site_ajout_form or just go to Petitchef.com and click on "Add your site"