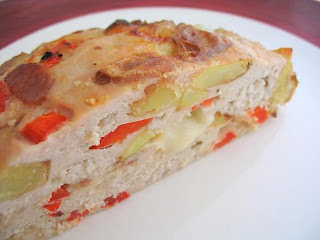 Preheat the oven to 450. Scrub, peel and cut the potato into half inch cubes. Place them on a baking sheet lined with parchment and sprinkle with salt. Bake the potatoes till cooked through, brown and crispy, 10-15 minutes. Reduce heat to 350. Put the bacon grease in a bowl and put the potatoes on top. Toss the potatoes till they are coated with grease. You can just coat them with some kind of fat before roasting if you want. Let the potatoes cool, then add the rest of the ingredients to the bowl and mix it together. Form into a circular mound and bake for 25-35 minutes, or until it's done and the cheese that's on the outside is browned.

This recipe came about by accident, while I was trying to make something else. I wanted to make a turkey pot pie filled bread kind of thing. I was going to make a filling and wrap it in pizza dough, basically. So a pot pie calzone. But anyway, one thing led to another and it turned into meatloaf. The measurements above are my best guess as to what I put in, not exact. Just so you know.

I had recently gotten my hands on some of Penzey's adobo, so that went in there as my main flavor. It goes really well with turkey. Since I was using the adobo I figured smoky flavor would be good, so in went some liquid smoke. I happened to have a fresh red pepper, in goes some of that. I also had (and this is a first, I never would have believed it if I hadn't seen it myself) a piece of leftover bacon. Doesn't that sound weird? Leftover bacon. But I'm glad it was there, it added some much needed fat, since ground turkey is so lean. And last but not least, the cheese. I would have preferred monterey jack or some cotija, but mozzarella is what I had. So that's what went in.

If I had been planning on doing meatloaf from the get go, I would have added bread crumbs and egg. But the texture was actually pretty good, if quite firm. Unfortunately I don't have a lot of prep pictures for this recipe, but here's what I do have.

First, I prepped the potatoes. Now the recipe above might seem odd to some folks since I roast the potatoes, dry and salted, at 450. The reason the heat is so high is because I was actually preheating my oven to use the baking stone and I didn't oil them because, well, I forgot to. 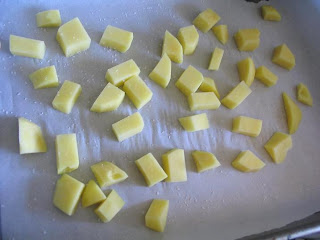 But it turned out really well. The potatoes were nicely browned and had a great, straight up potato flavor. 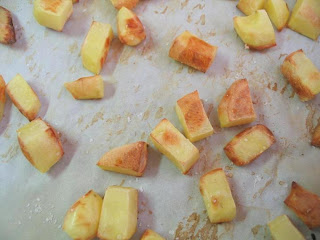 Plus once they were browned, I tossed them in some bacon grease. 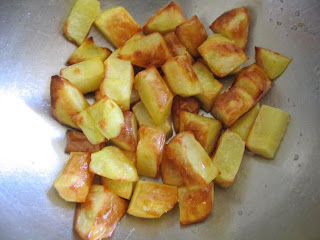 This gave another level of baconiness (always a plus) and added a little moisture to the loaf. Then I just mixed everything together, 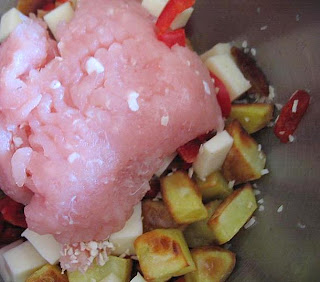 formed it into a disk and put it in a lightly oiled round one and a half quart casserole dish. 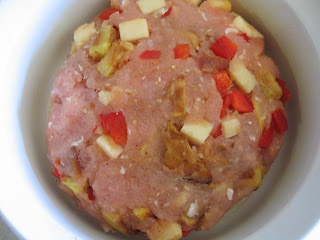 I wound up putting it in while the oven was still at 450, but I turned it down to 350 once it was in. I think starting it that high might have helped everything brown though. 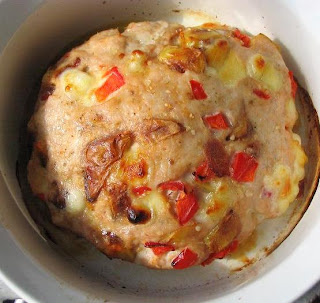 And it came out with a decent crust, lots of browned, melted cheese and all that other good stuff. 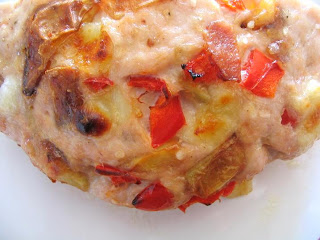 Big chunks of veggies, reservoirs of cheese, bits of bacon and the slightly spicy, smoky turkey. 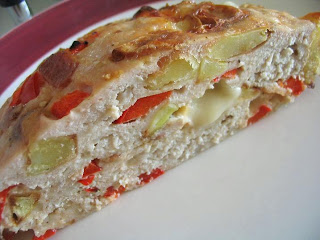 It stayed plenty moist and had enough flavor that it didn't need a sauce. This experiment was definitely a success. 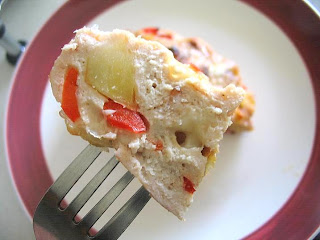 This is an awesome meatloaf! I love all those smoky and salty flavors here. Yum!

Great looking meatloaf, Bob! Don't you love it when the REAL cooking happens? That is, when you least expect it??

That looks so good! What great flavors you have going on in there. I've never seen anything like it before, it's so original!

Great idea... you've got your potatoes and meat all in one loaf! At first I thought, huh?? But after reading it again and looking at the finished product, this worked!

That looks REALLY good! And I am not really a meatloaf fan (unless Gyro meat counts) but it's got my three favorite things, Chipotle, Cheese and B A C O N!! Definately somethign to try.

you got lucky that it stayed moist...very lucky. Glad you rocked it.
If you were going to put a glaze on here, what would it be?

Hmmm, I love potatoes with my meat, never would have thought to put them together. Very interesting........

Nice twist on a meatty loaf. Liquid smoke! You were really going for that flavor.

Those mistakes you fix always turn out great! ...It's part of what's great when you cook WITH your kids. Life lesson...

I love turkey meatloaf. The addition of bacon and potatoes looks awesome!

Good job and tossing in bacon grease is always worthy!

Reeni: Thanks! Isn't it amazing how often "original" and "accidental" combine? :)

Karen: Thanks! It was originally going to have layers and be wrapped in dough, but then life happened and it all got tossed together. Heh.

Culinary Alchemist: Thanks! I don't know if gyro meat counts as meatloaf... doesn't matter to me, I love it all. Heh.

Dawn: If I was going to glaze it I would have either done a green chili one (green chilies would have been great in the loaf too) or a tomato/cumin/cilantro one. A little sweet and spicy, I think. Of course, straight bbq sauce would have been good too. Or just wrapping the whole thing in bacon...

Spryte: Heh, I thought so. My girlfriend wouldn't touch it. :)

duo: What can I say, I was on a mission.

unconfidential cook: Thanks! Most of what I learned about cooking I learned from my mom. Except most of her mistakes got turned into casseroles. ;)

ChefBliss: Thanks! I was quite pleased with it myself.

noble pig: Thanks! That's kind of my philosophy. ;)

tamilyn: Just think of it as pot pie, simplified. ;)

Don't you just love how you start off intending to make one thing and your ingredients lead you somewhere else? This turkey meatloaf looks great - I'll have to try the adobo seasoning myself!