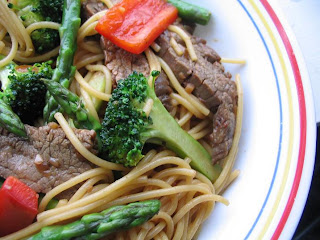 Combine the soy sauce, hoisin, sugar, ginger, garlic, vinegar and pepper in a zipper plastic bag. Add the flank steak, squeeze out as much air as possible and let marinate for at least an hour or as many as 4-5. Chop the onion into whatever size pieces you like. Cut the asparagus, broccoli and pepper into bite sized pieces. When the steak is done marinating, take it out of the bag, scrape off as much of the marinade and chunks of ginger and garlic as you can. Reserve the liquid. Pat the steak dry and cut it once along the grain, then into thin slices against the grain. Stir fry the vegetables, in several shifts if needed, till almost done and put them aside. Stir fry the steak in several shifts, then set it aside. Add the reserved marinade to the pan and bring to a boil. Add the cooked noodles and stir to coat. Add the vegetables and meat, stir to combine. Keep stirring for a minute to finish cooking everything. Then serve.

Here is another updated recipe. Well, sort of updated. Lo mein is never the same way twice when I make it. One odd thing happened this time around, there wasn't as much sauce as there usually is. I think it's because I added the hoisin to the marinade instead of doing it the way I usually do, adding it at the end when I'm cooking the sauce. Or maybe I accidentally used more noodles than normal. I don't know exactly what happened. But it was still wicked good. Anyway, the original post for this was also my very first post. It was more than a little rough around the edges, but that particular version of this dish is by far my favorite. This one is really just an example of how you can make it with whatever you happen to have. I had asparagus. So that's went in there. I guess that makes it kind of a east/west fusion kind of thing. Some of the pictures didn't come out so hot but fortunately I'm not vain, I just use what I have. Why don't we just dive right in here.

First things first, I made the marinade. A quarter cup of soy sauce in a zipper freezer bag thingie, 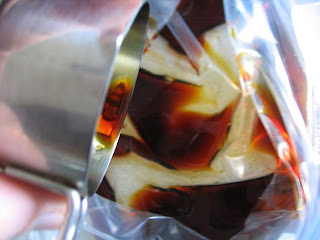 a couple cloves of minced garlic, 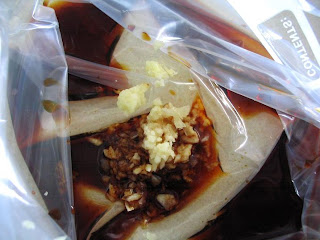 a big chunk of ginger. 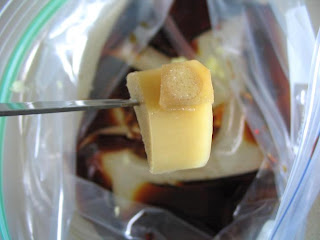 This is the ginger that I've been keeping in vodka, it still has lots of flavor even after twenty days. I minced it and tossed it in there. 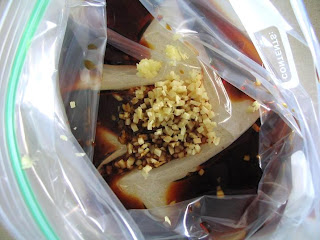 Then I put in the hoisin. 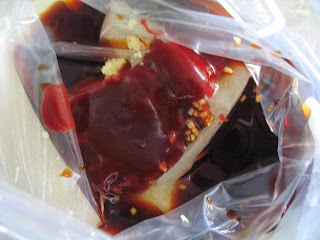 This I think was a mistake. If anyone decides to make this, add the hoisin after you bring the marinade to a boil at the end of the recipe. I'll point out when. But this is the way I did it and pretending I did it another way would be like lying. And I couldn't do that to you guys. Heh. Now toss in a little sugar and the vinegar, 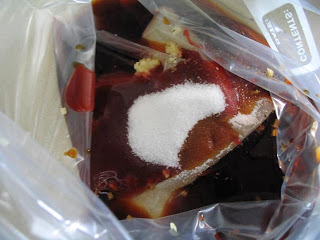 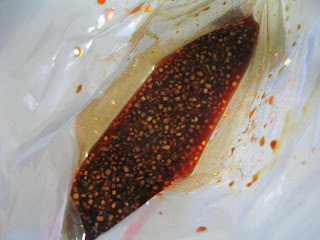 and slap the beef in there. 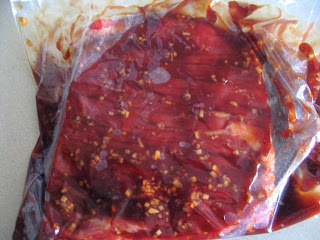 Get out as much air as you can and stick it in the fridge for a couple hours. When that's about done, prep your veggies. 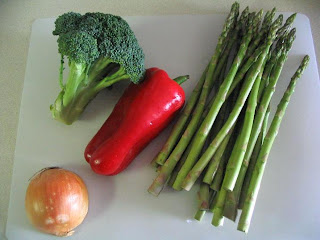 This time around I'm using asparagus, a red pepper, half an onion and some broccoli. Why? They're what I had on hand. Lo mein is kind of like a casserole that way. Anyway, I diced the onion, 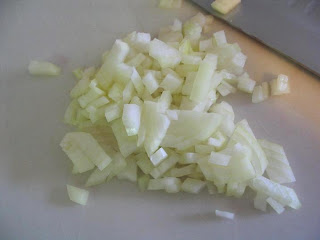 cut the asparagus into thirds, 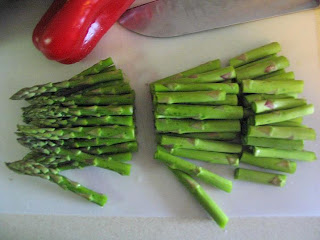 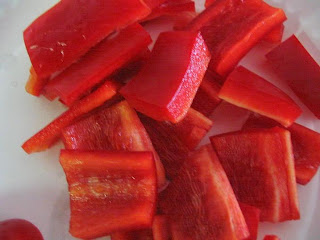 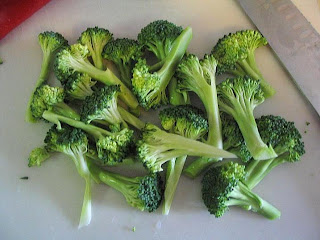 Is that even a word? Well, if not it is now. Next, the steak. 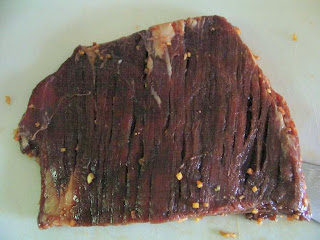 Mmmmm, flank steak. Man, I love flank steak. I have no idea what it is about it, but I just can't get enough. You want to take it out of the marinade and scrape off most of the garlic and ginger stuck to it, put the chunks back in the liquid and set that aside. That's the sauce. Pat it dry and cut it in half along the grain. 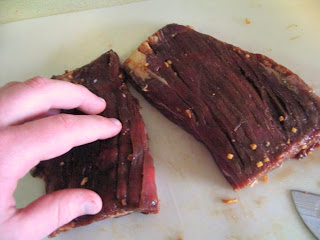 That's the way the strips of muscle go. You want a short grain in the end product, makes it more tender. Then cut each half into thin strips against the grain. 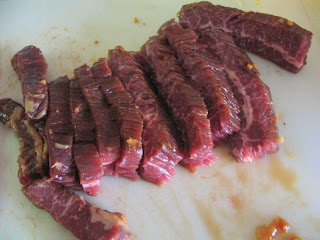 Now you're ready to stir fry. First you want to do the veggies. I usually do them one at a time, just to make sure they are all done just how I like them. But if you aren't as fussy as me then you can do them all at once. Well, if you have a big enough pan that is. You would probably wind up doing them in batches anyway. But here's how I did it. First the onion. I heated up my stir fry pan wicked hot, with a little canola oil in the bottom. I browned up the onion pretty well. 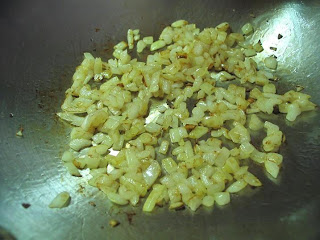 I much prefer it that way, especially with yellow onion. Then I tossed the asparagus in with it and cooked it for a minute or so. 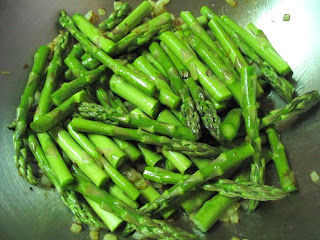 You don't want it cooked all the way since it will finish cooking at the end. Then I pulled that out, added a little more oil and tossed in the broccoli. 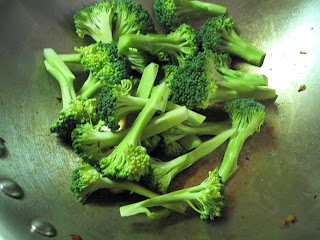 Once the broccoli was almost done I put in the peppers and just tossed them around little bit to sweat. 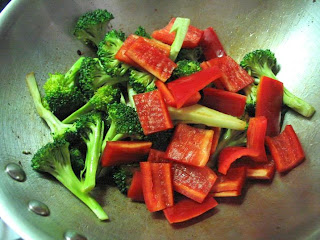 No squishy peppers. Pulled those out and put them aside and put in about a third of the meat. 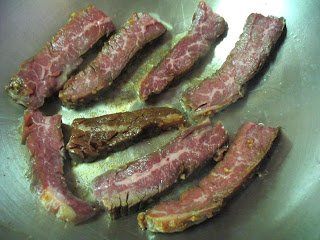 You want to cook the meat in shifts, otherwise it winds up braising in it's own juices. Once the meat was done I pulled it out too, poured in the leftover marinade and brought it to a boil. 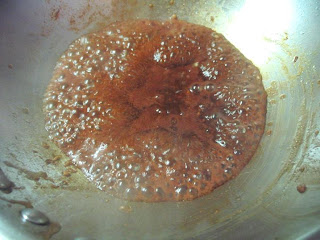 Here is where I normally would have added the hoisin sauce. I don't know what I was thinking adding it to the marinade. Heh, I never said I wasn't a flake. Once the sauce has boiled enough to kill any critters that might be in the raw beefyness reduce the heat to a simmer and toss in the noodles. 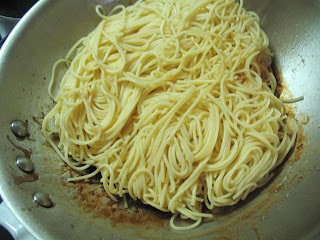 I just use spaghetti. I know, I'm a savage. You want the pasta not quite done when you put it in, that way it will absorb the sauce and be extra good. Toss it around to coat it 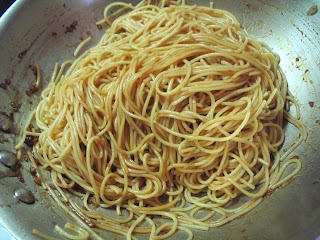 then dump everything back in. 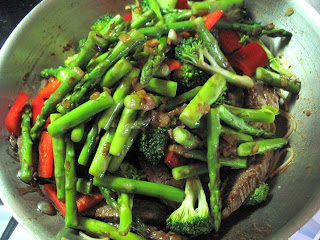 Now mix it all up and let it all finish cooking, stirring it every once in a while. 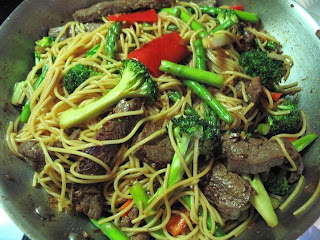 This also lets the flavors mingle a bit. And there you have it, flank steak lo mein with the veggies I had in the fridge. 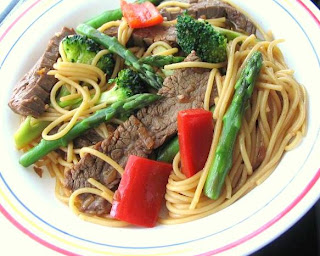 I just bought some rice vermicelli noodles to try along with some sweet and sour sauce-this would be a good way to try something new!

I love that you cook stuff like this and actually take the time to go back and measure them out! (I'm so bad at that) Thanks Bob!

That looks better than what I get at the Chinese restaurant, you savage, you!! I think they use spaghetti for theirs too. Looks awesome!!

Looks great--I'd make a huge batch so we could have it two different nights. I do that often and serve something else in between. Thanks.

oh yeah everybody in the pool to soak up that sauce!
looks good to me, I'm ready to eat!

tamilyn: good call, you should blog about it if you do. ;)

Reeni: Thanks! The main reason I started cooking Chinese stuff is because all the restaurants around me are just terrible. Now I've found I like the stuff I make more than even the restaurants I used to like! Heh.

unconfidentialcook: That's what I do too, I actually have some still in my fridge that is going to be dinner tomorrow.

This looks fantastically good, and I'm a sucker for flank steak!! Great instructions too!!

You can't beat a good flank steak for flavor and cost. Love the dish!

I'm going to get some flank steak! This looks great - the colorful veggies just pop and it looks so appetizing. Great job!

ChefBliss: Thanks! Yeah, flank steak is the bomb.

chuck: Thanks! That's so true.

Tangled Noodle: Thanks! You'll have to share what you do with the steak when you get it. :)

are you kidding me, that looks fantastic!! Wow!

Aggie: Heh, thanks. It did come out pretty well. ;)

"I just use spaghetti. I know, I'm a savage" Hardley! You're just cooking "Chitalian"