Noodles jumped up in my lap last week and looked up at me. I looked down at her and thought to myself "Holy crap, what's wrong with your face?" 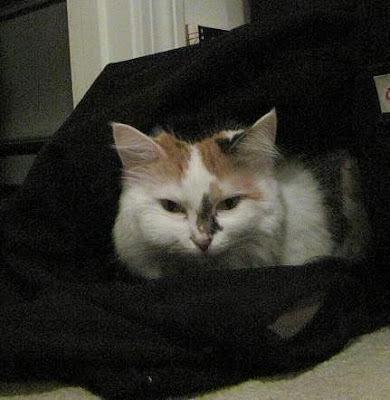 Turns out she had a nasty abscess in one of her teeth. She looked like she had the mumps. 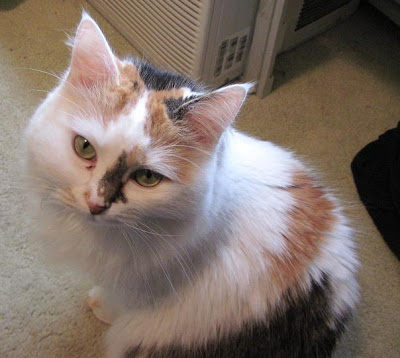 So she had to have an extraction, which is never fun. Although for cats they just knock them out to do it. Must be nice. Heh. They gave us painkillers for her, which she seemed to enjoy. 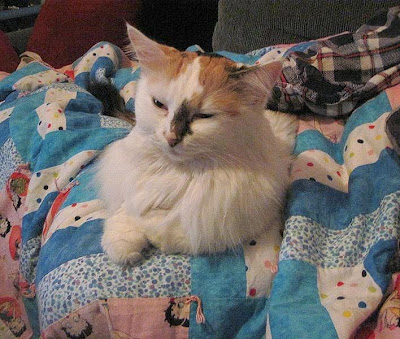 The real Bob was ridiculously happy when she was at the hospital and pissed when she came home. But he got over it, thankfully. 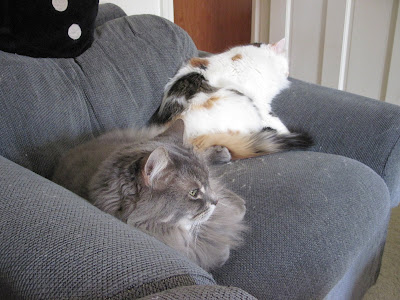 I don't need more cat drama on top of moving.

So I'm not going to be doing much cooking for the next couple of weeks, but I will be clearing out my camera. I have 954 pictures on my memory card, most of them food. So I'll be posting some of those, if any of them are worth posting. There's probably a reason most of them are still on the card. Heh.
Email ThisBlogThis!Share to TwitterShare to FacebookShare to Pinterest
Posted by Bob Labels: cats at 11/29/2009 10:27:00 AM 17 comments

For those of you just tuning in, I'm the kind of blogger who only posts about holidays after they happen. Mostly because I don't actually host any of them, having lived in a small apartment for the whole life of this blog. I typically go to my brother's place and he, his wife and myself cook. I did a whole post about Thanksgiving last year. This one is going to be a bit brief, but here are some of the highlights of the dinner this year.

One of the appetizers she made was this fruit compote. 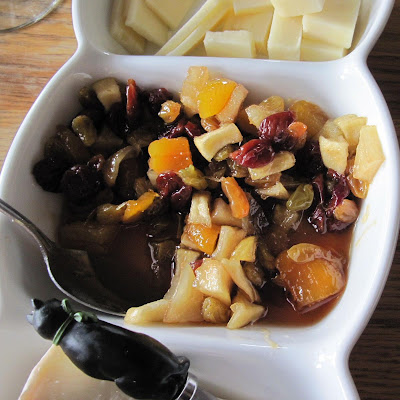 It was awesome, I'm going to get the recipe and do a post about it. There was also caramelized onion/cornbread stuffing which I completely forgot to eat and for some reason didn't take any home. 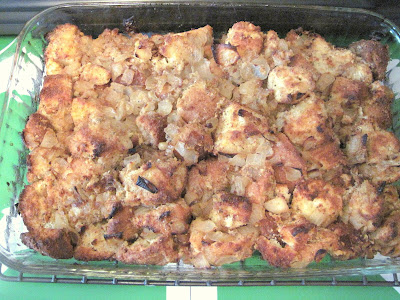 My sister in law offered me some to take, but clearly the wine was effecting my judgment since I said no. Who knows what I was thinking. Whiskey glazed carrots are always a good choice. 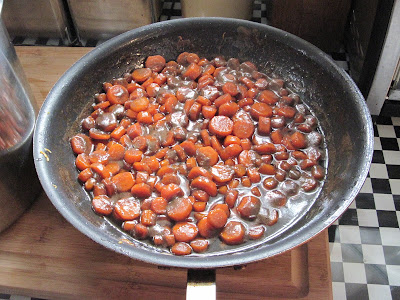 Baby brussel sprouts with bacon and... something. 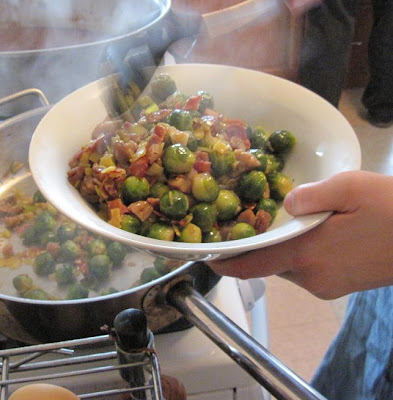 I don't remember what and I didn't have any since I don't care for brussel sprouts. Everyone who ate them said they were delightful though. Of course the turkey was amazing, 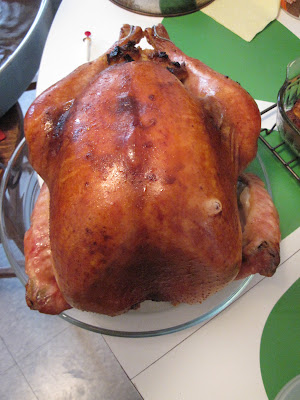 it always is when my SIL makes it. This, children, is where gravy comes from. 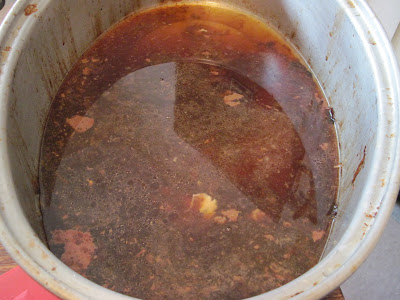 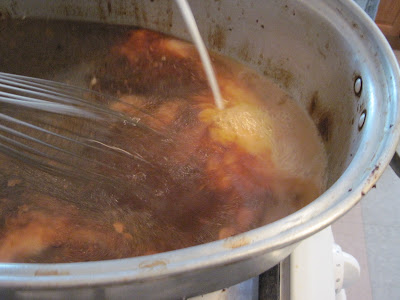 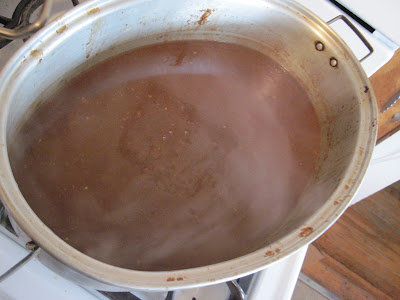 No, there is no mix of any kind in there. It's just drippings, basting liquid, salt, pepper and a cornstarch slurry. Yes, it is the best gravy in the world.

And that's all the stuff I got pictures of, I'm afraid I haven't been in blogging mode what with all the packing. But, I hope everyone who celebrates it had a good holiday.
Email ThisBlogThis!Share to TwitterShare to FacebookShare to Pinterest
Posted by Bob Labels: holiday meal, turkey at 11/27/2009 08:44:00 AM 17 comments

Here's a Bit of Good News

Don't like red wine? Well apparently you can get similar health benefits from chocolate milk!

"Scientists in Barcelona, Spain, recruited 47 volunteers ages 55 and older who were at risk for heart disease. Half were given 20-gram sachets of soluble cocoa powder to drink with skim milk twice a day, while the rest drank plain skim milk. After one month, the groups were switched.

Blood tests found that after participants drank chocolate milk twice a day for four weeks, they had significantly lower levels of several inflammatory biomarkers, though some markers of cellular inflammation remained unchanged."

While one month isn't exactly a long time for a study, I still say this is a promising area of research that needs a great deal of work done in it. More experiments are clearly needed.

I just wanted to share that, now back to sorting and throwing out junk.

That's what this whole situation is.

You see, my girlfriend and I have an opportunity to move to a cheap apartment in an excellent location and we just can't pass it up. There is a certain amount of gambling involved, which neither of us are keen on, but risks sometimes need to be taken. The apartment is also smaller, which blows, but we will have a full sized stove/oven and refrigerator for the first time in ~3 years. That will be nice. But I'm afraid I'm going to be a bit scarce for a while since moving will be taking up most of my energy.

However, while I might not be posting or commenting as much, I am still reading and will be back to posting again in the future.
Email ThisBlogThis!Share to TwitterShare to FacebookShare to Pinterest
Posted by Bob Labels: admin, random stuff at 11/13/2009 01:53:00 AM 24 comments

Omelets are hard for me to make. I've complained about it before. So when I had a craving for a western omelet I decided to make stuffed french toast instead, since it's quite a bit easier. 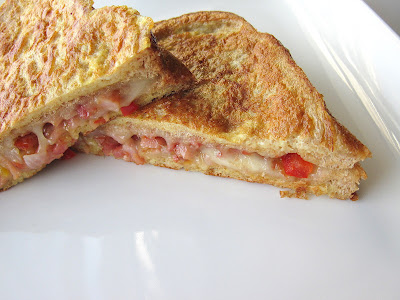 Now I've also covered stuffed french toast before, but this time I have a trick to share that makes the savory ones a little easier. Let's just dive right in here.

First off, western omelet fixings. That would be ham, peppers and onion, often cheese. Now you want to prep your bread a bit by topping two slices with some cheese. 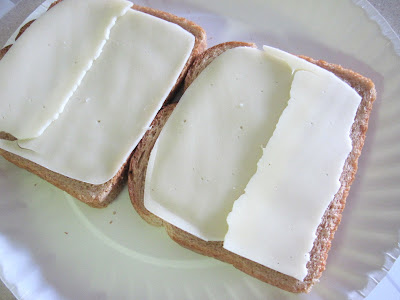 You want it on both sides, it's going to be what keeps this from being a huge mess. What kind of cheese is up to you, but I think cheddar is the best for eggs. Now, brown up some diced ham. 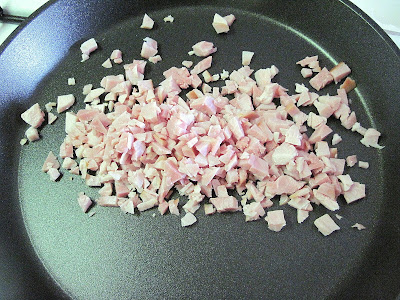 You want it fairly small, big chunks will be more prone to falling out. Once the ham is starting to brown toss in some diced onion, 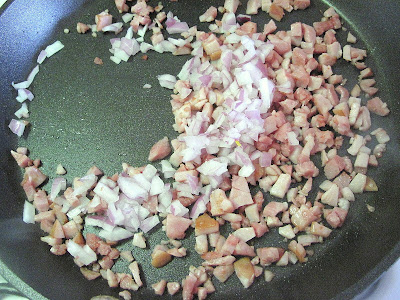 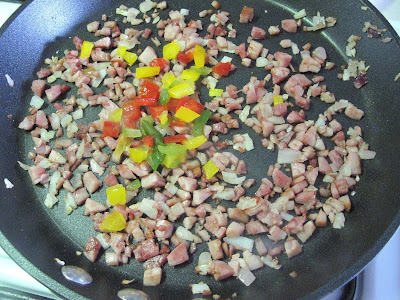 but when you add them depends on how soft you like them. The earlier you add them the softer they'll be. Mine were frozen, so they were going to be squishy no matter what. Now here's the trick, while the filling is still hot put it on one piece of the bread 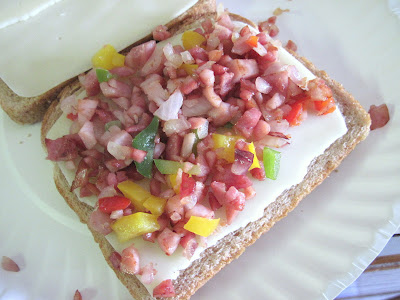 then top it with the other. Press it gently and let it sit for a minute or so. This will melt the cheese just enough so when you dip it in the egg it doesn't go all flopping around, spilling the filling everywhere. 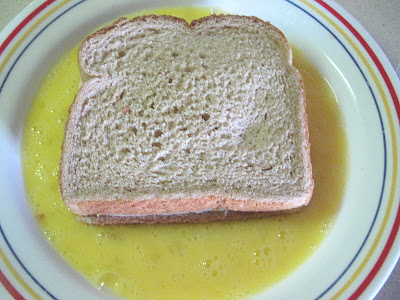 Which is what you do, on both sides. Now you just cook it in a medium hot skillet, 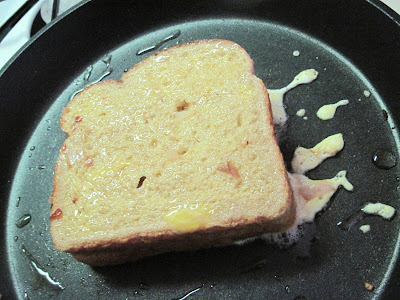 I used the same one I made the filling it since it had enough grease left from that, until brown on both sides. 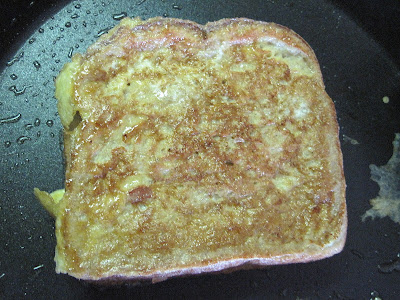 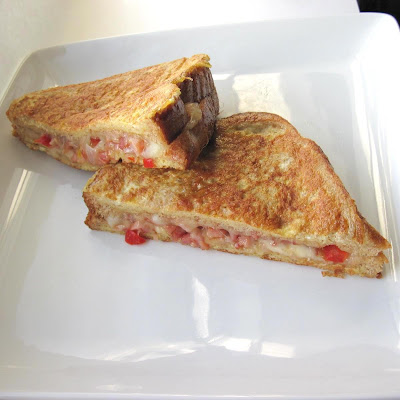 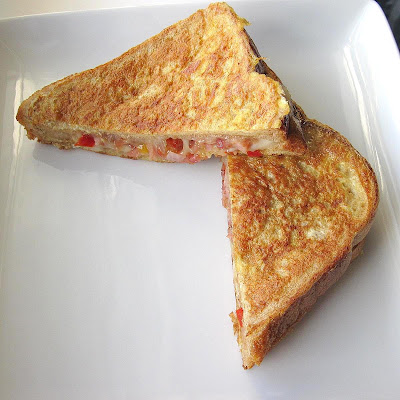 Here's a quickie, kids, since I'm wicked busy. It's just a little something that I tossed together with the rest of the pizza dough that was leftover from the other calzones I made. I made some barbecue bacon shredded chicken and wrapped it up, 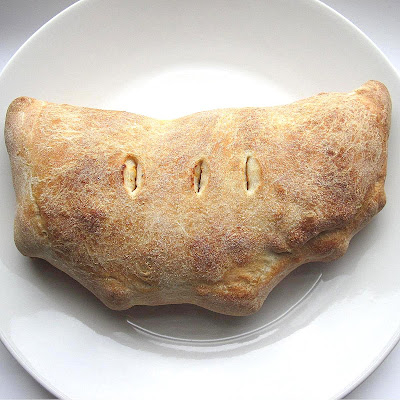 as I have a wont to do. It was awesome. 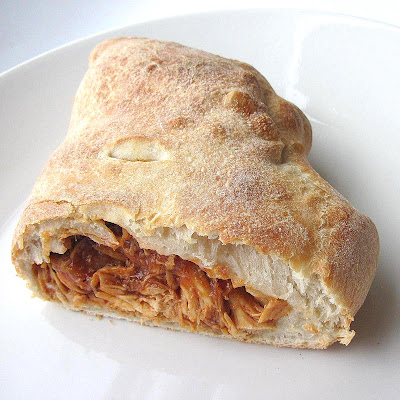 A little cheese is in there, although you can't see it. Is it technically a calzone? I say yes, although others will say no. But definitions are a weird thing and I want to know what you think. What makes a calzone a calzone?
Email ThisBlogThis!Share to TwitterShare to FacebookShare to Pinterest
Posted by Bob Labels: bacon, barbecue, bread, chicken at 11/02/2009 08:59:00 PM 36 comments

Noodles like to sit in the window and watch the leaves falling off the trees. 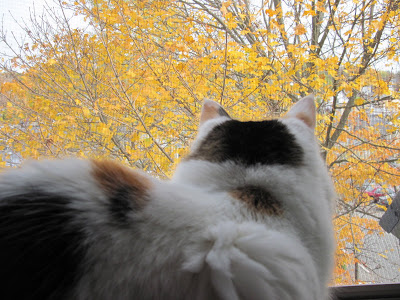 It's very cute, until she attacks the screen trying to get at them. She's... not so bright.

The real Bob is one classy, classy guy. 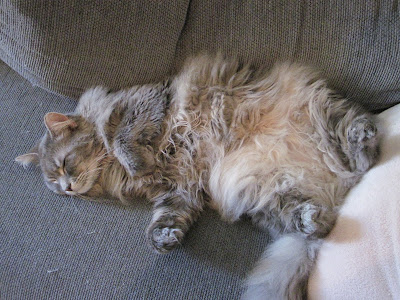 He just needs a beer to complete the image. Course, I wish I could lay like that, he looks wicked comfortable. Come to think of it, I could use a beer too. Heh.
Email ThisBlogThis!Share to TwitterShare to FacebookShare to Pinterest
Posted by Bob Labels: cats at 11/01/2009 02:09:00 PM 14 comments