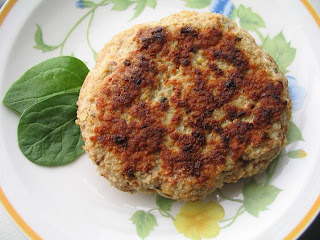 Mix everything together completely. Form into four patties and fry over medium heat till cooked, 8-10 minutes a side.

Ok, we're going to take a quick break from eggs today. Tomorrow however is going to be the last thing I did with them. Don't get your hopes too high though, it's as simple and basic as it gets. So while delicious, it's not new and exciting. But anyway, some months ago I saw a recipe for chicken cakes over at My Italian Grandmother and marked it for making.

While this isn't really that recipe, it was heavily influenced by it. These little beauties came out wicked good, tender, moist and flavorful on the inside with a nice crust on the outside. They can easily be eaten as is, with a knife and fork (me and my girlfriend split one right out of the pan. Just to make sure they were ok of course. Heh.) or made into a sandwich. I liked them on a toasted roll with a little mayo and spinach. Not only are they mad good, but they were really easy and pretty healthy too.

You can of course use fresh herbs instead of dried, just change the proportions appropriately. However, I actually really liked the dried onion in this. The flavor was nice and mellow and I think actual chunks of onion would have detracted from the soft texture. So, let's do this thing.

First you put everything in a bowl. 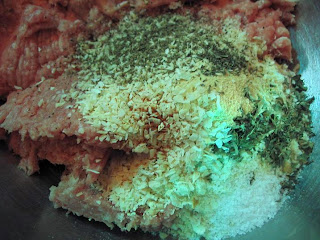 Then you mix it up really well. 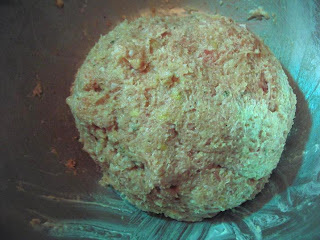 This is not a complex recipe here. Now just form it into patties and slap it onto a preheated, non stick pan that has a couple teaspoons of your favorite fat in it. I used olive oil, but bacon grease would have been delightful. Heh. This mixture is a bit sticky, but not too bad to work with. The original recipe called for making eight patties, but I just made four big ones. Works better for sandwiches that way, but you can make them whatever size you like. It would even make a mean turkey meatloaf, if you were so inclined. After eight minutes or so, flip 'em. 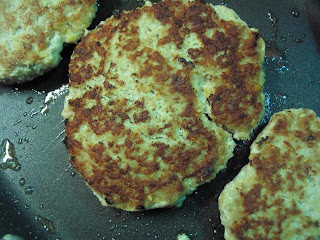 They should have a nice crust on them. Once they are done, flip them off the pan onto a paper towel lined plate to sop up any extra oil and there you go. You can eat them like that, maybe with some kind of sauce. The original recipe had an aioli with it, but I didn't feel like making it. Some garlic mayo would have been good too, but again, didn't feel like making it. We also had some sauteed broccoli to have with them, but I completely flaked on taking a picture. Anyway we just tossed them onto rolls and ate them like that. 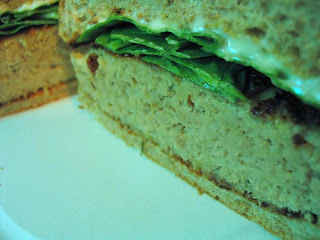 After taking a blurry poorly lit picture, of course. Heh.

On an admin note, I would be interested to know, do you guys prefer the recipes at the top of the post or the bottom? I have mixed feelings about both. I like putting it at the top because then it's right there in case people don't want to read my ramblings and there is a shot of the finished dish right at the beginning, so you know what you're getting into. But when I put them at the bottom you get a reveal instead of showing it off at the start, but if you don't want the instructions you have to scroll all the way to the bottom to get it.
Email ThisBlogThis!Share to TwitterShare to FacebookShare to Pinterest
Posted by Bob Labels: low fat, sandwich, turkey at 2/12/2009 12:00:00 AM

Hey why not...how great does this sound.

they sound so good!
I like it when the ingredients are listed at the top. I usually read through the whole post while munching breakfast, and then I come back later to jot down or print the recipe, so it is right there when I open the page. Even if the ingredients are not up my alley I still read through the whole blog for any tips, techniques, and giggles over your wicked cool comments! =)
MaryAnn

Those cakes look yummy! I like all the spices and cayenne in them.

Those look GREAT Bob! I like the pic and recipe at the top too, or at least after a short intro. You crack me up, so, I'm reading the whole thing anyway hehehehehe.

Good combo! They came out perfectly. I don't know if I would have put them in sandwich, I might have put some corn relish on them and then maybe in a rollup. Oh listen to me, I'm friggin starving now!!! lol

They look awesome! I've got to try mine with turkey next time!

Looks like these turned out to be really good! I have always liked that you put the recipe first. I can read it and then know what's coming when I read the rest of your post with the pics.

Dawn: Mmmm, corn relish. That would be good. Thanks!

Michele: Let me know how it turns out if you do. :)

So far the consensus is recipes first. Good to know. ;)

I read through everything so it doesn't really matter to me. However you prefer, but thanks for asking!! I like the whole idea of turkey cakes. They look very tasty!! Garlic mayo sounds yummmmmmm!

I love them! Will have to try these soon!

Very nice! I like chicken/turkey sandwiches but get so bored with a big chunk of chix or slices of deli turkey. What a perfect antidote!

Wow! this is totally a yummy Turkey cakes.

Reeni: Thanks! Garlic mayo is the bomb. Eventually I will be posting my recipe for it...

Tangled Noodle: Thanks! It's a good thing for mixing it up a bit.

These look and sound great!! I make turkey meatloaf but have never tried the "cakes", thanks for the great tutorial!! As for top or bottom, you decide. I read the whole thing anyway, and enjoy it whoever it is presented.