Steak Fajitas from Stuff I Had in the Pantry 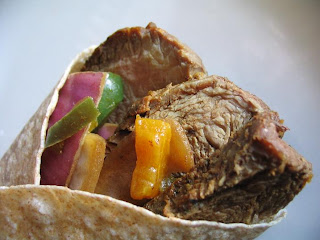 Rub the steak with the cumin, parsley, salt and pepper. Sear in a hot pan with some olive oil, till done. Remove from the pan and add the onions. Saute till almost soft then add the frozen peppers. Heat them through. Slice the steak thin and serve with veggies on tortillas.

Ok, one look at this recipe is going to tell you it wasn't perfect. But I was surprised at how good it was with just these simple ingredients. I will be improving it though, but I wanted to post a kind of rough draft. This way I could get opinions from people who cook this kind of stuff (Spryte, I'm looking at you) on how I can make it better (other than fresh herbs and cilantro instead of parsley, I know that much. Heh.). Other than taco kits, this was the first Mexican kind of thing I ever made. But I'm getting a bit ahead of myself. This is my very late, not even slightly romantic Valentine's Day post. I asked my girlfriend what she wanted me to cook her on V-Day. She said fajitas. I said ok. Now, I had never made them before, but with this recipe as a guide (although I bet Drew would either faint or want to hit me for what I did to it) I whipped some up. Why didn't I hit the grocery store for a holiday meal? Well, I've been working late shifts lately and, despite my love of food and cooking, I hate the grocery store. I think it's because I used to work in one. So when I came home from work on V-Day, at eight PM mind you, I had to work with what I had. Fortunately it came out wicked well and my apartment smelled like a Mexican restaurant for a couple days. Apparently that awesome smell that Mex places always smell like? It's cumin, garlic and olive oil. Who knew?

So first I grabbed some flank steak. Because you really should use flank steak for fajitas. Then I rubbed it down with some cumin, garlic powder, dried parsley (dried cilantro would have been better, fresh even more so) and salt and pepper. 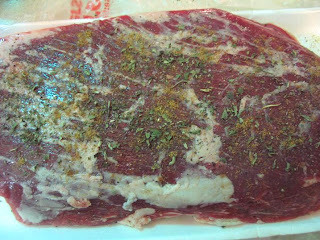 Then I rubbed it in real good. 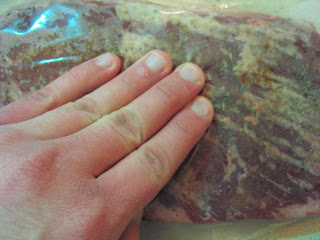 Then I let it sit for about an hour to marinate. I seared it up in a steel pan loaded with olive oil. 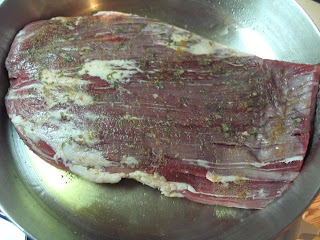 Seriously though, lots of olive oil. 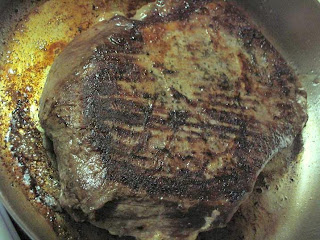 What I didn't have in fresh herbs I made up for in pure fat. My mother taught me how to cook and she was a farm girl. Heh. When that was done I pulled it out and tossed in some sliced red onion. 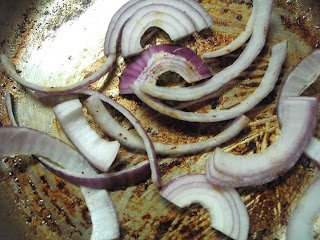 This was just for me, my girlfriend has a thing against onions. I sauteed them up, but not too much. Fajita veggies should be crisp. Then I tossed in some frozen peppers, since that was all I had. 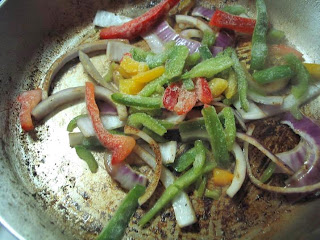 I just heated them through, since anything more would have made them squishy and my opinion on squishy vegetables is pretty well known, I think. Then we just wrapped them up and ate them. 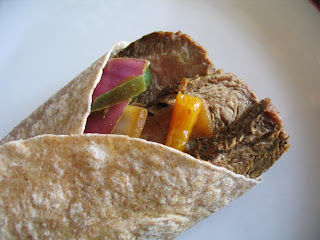 With guacamole and sour cream that my girlfriend grabbed from the Mexican restaurant down the street. They are very nice there and just gave them to her for free. Plus they make a steak fajita chimichanga that is killer. Anyway, this recipe was good but need improvement. But if you ever have a fajita craving and only have these ingredients, you can make something that will curb it. At least till you can get your hands on some cilantro.
Email ThisBlogThis!Share to TwitterShare to FacebookShare to Pinterest
Posted by Bob Labels: beef, mexican-esque at 2/24/2009 11:34:00 PM

They look awesome Bob! Wish I could smell 'em. mmmmmmm

Cumin must have added an interesting kick to the fajitas. Sounds great.

That is one of my favorite Mexican restaraunt smells-when they are rushing the fajitas on that sizzling plate to the table. YUM!

I love fajitas and I love "stuff i had in the pantry meals" -- this looks good regardless and I can't wait to see the next version!

Yeah, I love the smell of cumin. Fajitas look good but you might want some kind of sauce in there. Here's how I make my chicken fajitas: http://ohboykarencooks.blogspot.com/2008/10/chicken-fajitas.html

If this is the first Mexican dish you've made outside of kits, then you're a natural! Looks delicious and it's great that you used what you already had (my pantry and fridge are bursting with food but I still end up going to the grocery for something little missing thing instead of winging it!). Great job - it looks muy delicioso!

Sounds good to me Bob, Can't wait to see the next version, but I have often used Italian Parsley and just added more pepper (Or worse, chopped up some arugala.. LOL)

I think they look great! Your girlfriend is so lucky that you cook!! I've never had any of my boyfriends cook me dinner or much of anything. My next boyfriend has to cook or no go. And what a coincidence, I was going to make chicken fajitas tonight. They do smell good cooking.

YES!!! This is awesome! I love what you made with stuff from your pantry!

5 Star Foodie: Thanks! Is cumin not normal in fajitas?

tamilyn: Totally. And it sounds cool too.

ChefBliss: Thanks! Heh, often "from the pantry" meals are all I have. ;)

Karen: Those look good, but I usually prefer to keep my sauces on the side, myself.

Culinary Alchemist: Thanks! I wound up getting some dried cilantro a couple days ago from Penzeys, I'm going to use that next time.

Reeni: Heh, I don't think I've ever dated someone who cooked.

jesse: It's probably not as grand as you think. ;)