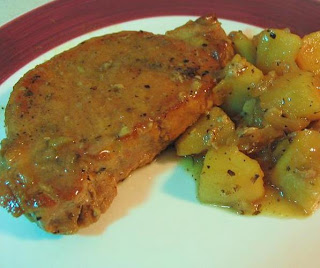 For the pork:
1/2 tsp marjoram
1/2 tsp tarragon
salt and pepper

Trim the chops if you need to. Rub them with salt, pepper, tarragon and marjoram. Sear them in a very hot skillet, with a bit of oil, then put them on a plate and tent them with foil. Turn down the heat to medium hot and add the onion. Brown it, then add the garlic. Sautee the garlic for 30 seconds or so and then add the flour. Cook it for a minute or so, but don't let anything burn. Pour in the cider or juice. Add the vinegar and mustard and stir it together. Bring it to a high simmer and let it reduce for a minute or two. Then add the chops and apple. Reduce heat to low, cover it and let it simmer till the pork is cooked and the apples are tender.

A while ago I had an apple I needed to use and pork chops in the freezer. These two things kind of met head on and became this. Now I know there are tons of recipes on the net for apple braised pork, but I really didn't feel like looking any up. So I grabbed what I had on hand and tossed this together. It came out pretty well, but I know a few things I will change next time. For one, cider would have been much better. But all I could get was apple juice, which made it quite sweet. I had been planning on adding brown sugar, but I think that would have been a bit much. A bit of cinnamon and some rosemary would have been good. I think a pinch of cayenne would have been nice too. But anyway, here is what I did.

First, I seasoned the pork chops. These are boneless center cut chops. They're pretty lean but they do have an outer layer of fat, which I should have trimmed some of off. But I rubbed them with salt, pepper, 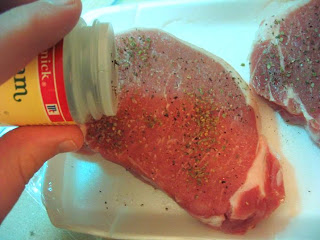 Why marjoram and tarragon? They were the first spices I grabbed. I'm wicked good at carefully thought out flavor schemes. Heh. But they worked out really well. I intentionally put lots of seasoning on since I figured some would be coming off in the braise, but next time I will put on a bit more. Then I seared them in a bit of oil. 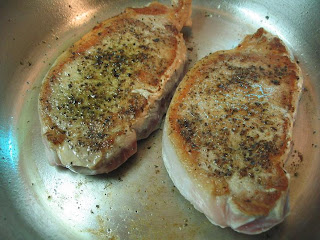 I did this over really high heat so they didn't cook too much, since they would be braising. Then I reduced the heat a bit and browned up the onion and garlic. Well, the onion first, then the garlic. 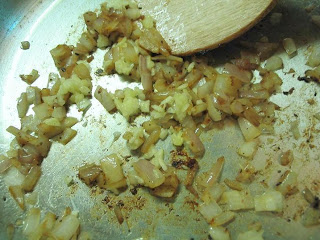 Tossed in a little flour, to help thicken the sauce, 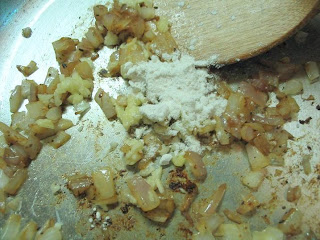 and cooked it for a minute. Poured in the apple juice. 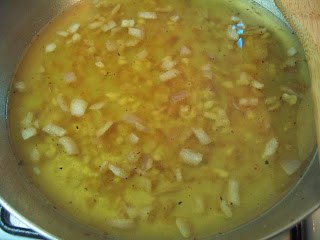 Here is where I added the vinegar, but once again I have forgotten to take a picture. I did put in vinegar though, I assure you. Then the mustard. 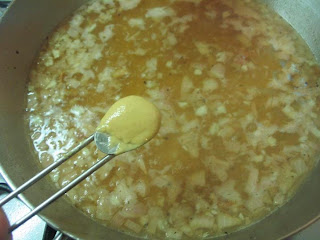 This is another thing I will add a little more of next time, although it might not be as important with cider as it was with apple juice. The apple juice really needed more flavor, which the mustard helped with a lot. But cider has plenty of good flavor on it's own. Anyway, then I reduced the sauce a little and tossed the chops 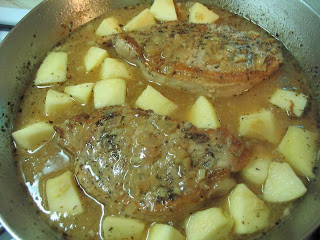 Then I covered it up and let it simmer for a while. I think it was around 15 minutes or so, but I really don't remember. Just do it till the chops are done, then pull them out. If the apples need more time you can always let them simmer alone for a while. Or just eat them crispy in the middle. And there you have it, braised pork chops with apples. 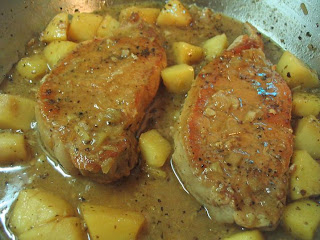 So, this experiment was good, but needs more work.
Email ThisBlogThis!Share to TwitterShare to FacebookShare to Pinterest
Posted by Bob Labels: experiment, fruit, one pot meal, pork at 2/02/2009 12:16:00 AM

Sometimes the best things start with an experiment. I know my hubby likes applesauce with his pork chops, so that is almost like a rustic version.

"Wicked" I laugh everytime I see it in your blog. The hubby knew right away that you were from out east :)
We have transplant friends who have been here for over 20 years and they still talk with an accent and say 'wicked'. I know, like many old timers here don't sound like Ole and Lena.

Apples and chops are just the classic! Love the gravy in there...very nice!

Thanks for including step-by-step photos! These look great - apples and pork chops are such a delicious and classic pairing.

This looks great - love the combination of apples and pork. Braising is a great way to develop all those yummy flavors!

so the tarragon and majoram went ok together? cool. I must try then.
It looks really juicy--the cider helps a lot with that.

Great job for just throwing it together without a recipe!! You rock!

tamilyn: It's pretty hard to take the North East out of people. :)

Brutal: And thanks to you. Heh.

5 Star Foodie: That's what I like most about braising. That and it's so easy. ;)

Dawn: Yeah they did. And they went well with the apple flavors, I was pleased.

Apples and pork just go together and you made this work really well.

Experimenting is the way to go. Would love to see you revisit this after you're perfected your recipe.

It looks like a tasty experiment to me! Though I've found that making pork chops can be quite challenging, as they tend to dry out, but the 'sauce' or glaze looks like it adds a good amount of moisture. I know these flavors work...I love apples and anything!

This looks really good, pork and apple is such a classic combination. Not too long ago I made a pork tenderloin with leeks and apples, it came out great.

Looks delicious!! We had pork chops and, yes, applesauce, for dinner the other night, but baked in the oven with veggies. I will have to try your sauce!! Thanks!

I love the originality of this recipe. Seems delicious and creative. Unfortunately, we don't have pork here in Turkey. Do you think I can follow the same procedure for meat/ beef or chicken?

Duo: And you probably will. ;)

Sophie: Thanks! Yeah, the sauce does add plenty of moisture. Which is particularly important with that cut of chop.

Sara: Ooo, leeks would have been good in this. Thanks for the idea. :)

Hayley: How did she make the bratwurst? You can't just toy with me like that!

Chefbliss: Thanks! If you try it, let me know how it comes out.

zerrin: Thanks! I don't see why you couldn't use another meat. I think chicken would be best (probably boneless/skinless breasts), but lamb might work too. I don't know about beef.

OK, I did something like this, too. Super thick Pork loin chops, granny smith apples, yukon gold potaotes and vidalia onions..all braised together...yum yum yum. Sounds like a sloppy mess...but ooooh so good!

Tracy: Potatoes would have be awesome! Great idea. :)

This was awesome! I used apple wine instead of apple cider. What a difference! I didnt have an apple so I used some apple sauce, I didnt need the flour, the apple sauce thickened it some. I only used about 1/3 cup. Thank you for a great dish!!

Sally, Palaski PA: I'm so glad you liked it! Next time I make it I'll definitely try it with apple wine. Thanks for letting me know you tried it out. :)