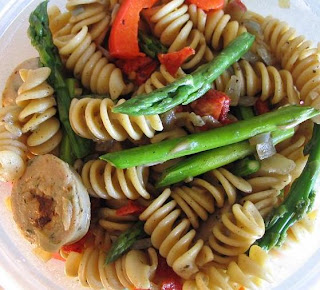 Chop the onion into small pieces and mince the garlic. Cut the asparagus, sausage and pepper into bite sized chunks. Brown the sausage over medium high heat. Once it's nicely browned remove it and add the asparagus. Cook for a minute then add the peppers. Continue cooking till the asparagus is almost done how you like it. Remove the veggies from the pan and add the onion. Brown it up well then add the garlic. Saute for 30 seconds or so then deglaze the pan with the broth. Reduce the heat to a low simmer, add the butter, rosemary and thyme and let it reduce till it's about a half cup, maybe 5 minutes. Add the pasta, toss to coat and let it simmer till it's absorbed most of the liquid. Add the veggies back in along with the sun dried tomato and sausage. Stir to combine.

I don't know about all of you guys, but I've been eating a lot of heavy stuff lately. So I wanted to make something a bit lighter and this is what I came up with. It was pretty good, lots of veggies, low fat, plenty of flavor. I did, however, completely forget to write down the recipe while I was making it, so this is really just a guess. This is one of those recipes where you can sub out anything with pretty much anything else. Don't want chicken sausage? Replace it with kielbasa, regular chicken, whatever. Same with the veggies. Have something in the fridge that you need to use up before it starts to stink up the place? Toss it in. Anyway, this is what I did.

First off I prepped the veggies. Asparagus and half a red pepper (a whole pepper would have been good, but half was all I had). 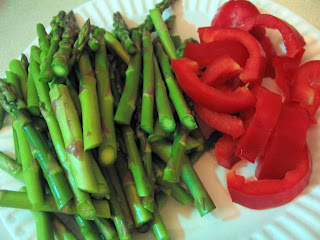 Next time I will cut them a little smaller, it would make it easier to eat. Although I did do a slick thing with the pepper, check it out. 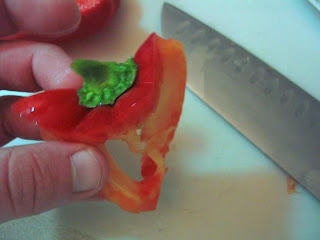 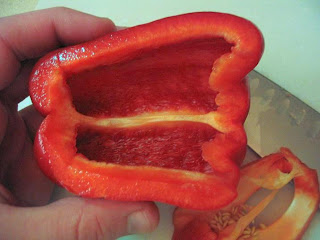 All the seeds and ribs in one piece! I'm a sorcerer! Heh. I also chopped up some onion, garlic 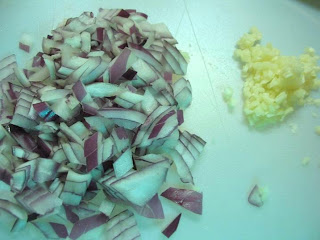 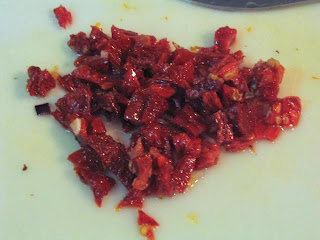 Next I took some chicken sausage, 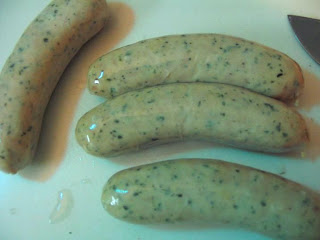 this is a garlic/herb flavored kind, and cut it into discs. And browned it. 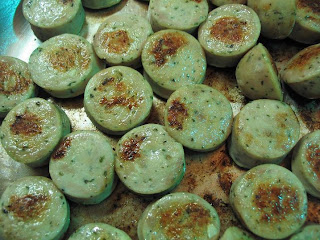 Now, I'm not the biggest fan of chicken sausage, I find the texture leaves a bit to be desired. But if you brown it up well that helps and the flavor is usually good. But if you don't like it you don't have to use it. Once the sausage was browned I pulled it out and tossed in the asparagus. 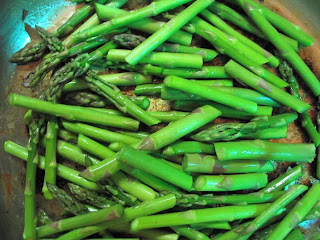 Sauteed that for a little bit, but not too long. You don't want it thoroughly cooked since it will have more pan time before the end. I also tossed in the peppers, but just for a minute. 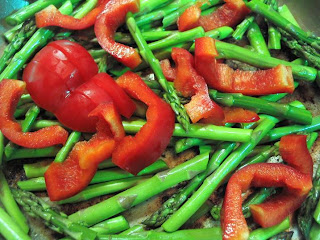 Squishy peppers make me angry. Then the veggies come out and the onion goes in. And since I apparently can't ever get a picture of every step, browning the onion and garlic won't be shown. But you want to brown the onion first and then cook the garlic till it's fragrant. Then add in the broth and herbs. 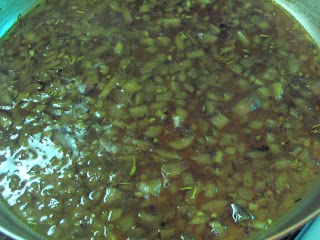 Scrape up the fond and let it reduce by half or so. Instead of broth you could use wine for this and I bet it would be awesome, but I didn't have any. Once the sauce has reduced add the pasta. 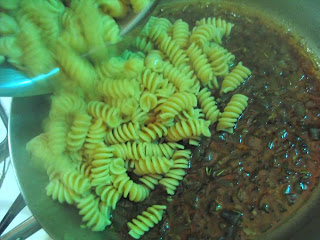 The pasta should be a bit under done because you want it to absorb most of this liquid. To get it to do that you let it simmer, mixing it around a bit while it does. 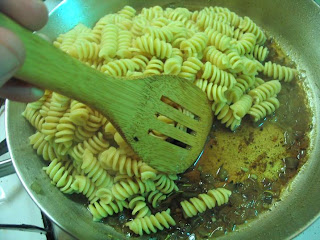 I also added a pat of butter at this point. 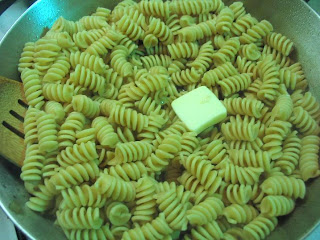 Just because. Once most of the liquid is absorbed you just add the sausage, 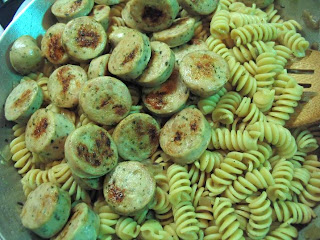 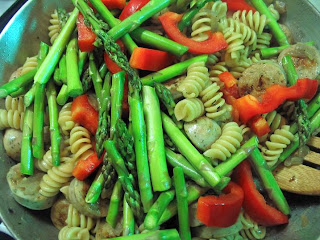 and sun dried tomatoes to it, 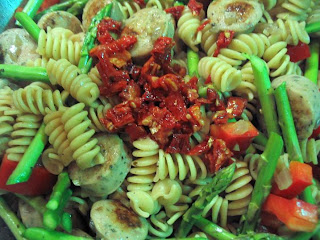 mix it around and there you go. 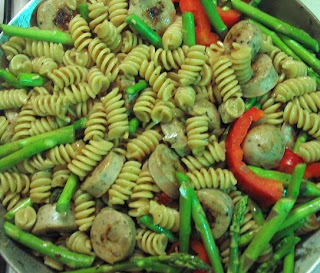 A nice light lunch or dinner.
Update: I've decided to send this over to Noobcook for Presto Pasta Nights. I hadn't heard of PPN before, but it sounds like fun!
Email ThisBlogThis!Share to TwitterShare to FacebookShare to Pinterest
Posted by Bob Labels: asparagus, experiment, low fat, main dish, pasta, sausage at 2/17/2009 12:00:00 AM

I'm going to pass this one on to my sister-it sounds like something she would love.

And, okay, not all guys are wimps when sick....just the ones I'm associated with (wink)

Last night for dinner I made something very similar actually with the same idea of eating lighter. I also used chicken sausage and peppers to add in the pasta. I wish I added asparagus too - that sounds excellent.

another bad ass creation here! love it!
glad to see you put butter on your pasta. so many people don't and it kills me....

Bob this looks delicious! I love these meals where you start with whatever you have and end with a masterpiece! Well done!

tamilyn: Let me know how she likes it!

Spryte: Well, you could make it for yourself and give him a pb&j. :D

Dawn: Thanks! I know, right? What's pasta without butter?

Chefbliss: Thanks! Yeah, they are always fun. :)

Mmm, that does look good. Except the only think I have is the butter. :)

This is the way I like to cook... whatever there is on hand and add pasta! Love the addition of the sun dried tomatoes!

mmmm...this looks good. i'm def going to try this, but i'm going to make small turkey meatballs to go with it instead.

Chrystal: I wish I had a Trader Joes nearby so bad! They have so many good things.

Karen: Thanks! This was actually the first time I've ever used sun dried tomatoes, I was pleased with how they worked out.

der hasser: Thanks! Mini turkey meatballs is an awesome idea. Next time I'm going to do that, probably with the mix from the turkey cakes I made the other day.

This is my kind of meal!! Love pasta with lots of colorful veggies. Isn't chicken sausage the best?

I love it!! Some of the best creations come from cooking what's in your fridge. This is one of them!

This looks so colorful, healthy and appetizing! I bet this would taste great chilled as well. Now, I'm starting to think "summer pasta salads" . . .

Reeni: Thanks! I totally agree, some of the best stuff I've made has been whipped up from random fridge things.

Tangled Noodle: It does, as a matter of fact, taste good chilled. ;)

The pasta looks refreshing and delicious, and I love the step by step photos too. Thanks for sharing with PPN =)

Looks like a great recipe. I will definitely be trying this one!!!

This looks so yummy! I could live off of pasta (of course I say that about many things....but I certainly eat pasta enough to prove it :) )

Lovely dish and great step-by-step. Thanks for sharing with Presto Pasta Nights. Hope to see you here often.