Last week Spryte made some egg salad. I looked at it and thought "Man, that looks good. I wish I still had some of those fresh eggs, that would be awesome!". So I mope around a bit. Then my brother calls and says he has some more for me. Don't you love it when things work out? So I had to make up some egg salad, I think there's a law about it. I like mine very simple, just hard boiled eggs, 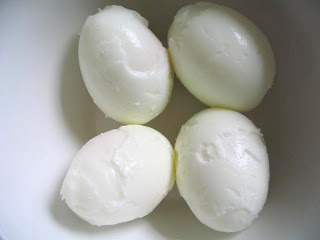 (which I had a wicked hard time peeling, for some reason) mayo, mustard, salt and lots of fresh black pepper. 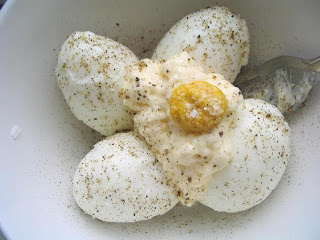 Sometimes I put a little paprika in them, makes it like deviled egg salad. Then I smash it around with a fork for a while 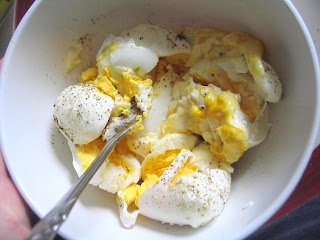 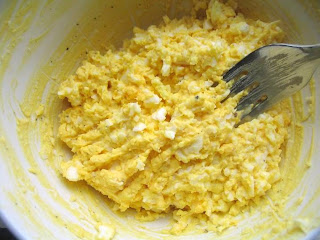 Apparently it needed inspecting and fortunately my quality control group was on the job. 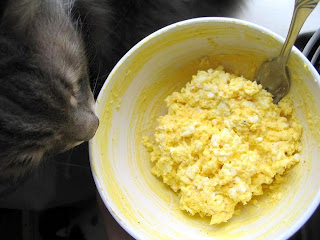 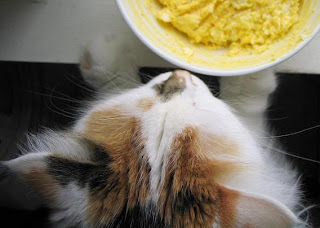 I didn't have any croissants like Spryte did, but I did have some seeded faux Italian bread from a convenience store. 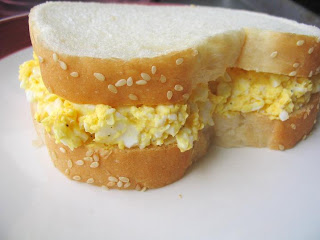 I actually like egg salad on crappy white bread, I'm not sure why. Of course, I also like it on multigrain bread or french bread or. Heh. Some spinach or lettuce would have been good on it, but there was none to be had. I don't really like celery or relish in any kind of salad, no olives either. Not a big olive fan. So what you do you kids like in and on your egg salad?
Email ThisBlogThis!Share to TwitterShare to FacebookShare to Pinterest
Posted by Bob Labels: cats, eggs, sandwich at 2/20/2009 12:00:00 AM

I love olives, but not in my egg salad. I make mine like yours, but I add Tabasco or Tapatio or whatever chile sauce I happen to grab first.

I love sweet relish in my egg salad. As well I only use miricle whip salad dressing. I do like to add tabasco too. Egg salad is best on soft white bread. Reminds me of being a kid again.

Try soaking the hardboiled eggs in cold water for a few minutes, it should make it easier to peel.

I have the same problem with hard boiled eggs. It must be genetic. I have tried everything, but I still end up with chunks sticking to the shell.

I like some smoked paprika in my egg salad.

I love your quality control team!

I like the idea of paprika in the egg salad. That sounds excellent!

I have had chickens for years. I've YET to find a way to peel them without tearing them up.

I love that you blogged your quality control team.

Do not use fresh eggs for boiling. Older eggs are best for boiling as the egg won't stick to the shell. I read this in a cookbook years ago and always wait a week or two before boiling the eggs.

Oh that sandwich looks so good! I LOVE egg salad...I'm excited b/c my sister just got her chickens and she's hopefully got some eggs for me this weekend!

I always rinse my eggs under cold water for a while...I think it helps with the peeling.

Congrats on being featured on Leftover Queen's FFF this week! ;)

Oh man, I love egg salad! And now the cycle continues because I have to make some, too.

Don't have fresh eggs, but I do have organic, cage-free. Those'll do. mmm!

To make the eggs easy to peel, put salt in the water when you cook your eggs. Also try adding some fresh lemon juice, and fresh parsley to your egg salad.
Phil

I've also heard that older eggs are easier to peel.
I love fresh dill and a squeeze of fresh lemon juice in my egg salad.
also agree about eating it on crappy white bread. I think that's how I used to have it as a kid :)

Vicki: Ooo, Tabasco would be good!

Anonymous1: I've never been a fan of relish in salads, it was always a bone of contention with one of my sisters. Heh.

Anonymous2: I did that this time, it didn't seem to help.

Brutal: I wonder if mom ever has the peeling problem? Mmmm, smoked paprika.

Dawn: I bet! Bacon makes everything better. :) I just wish my quality control team had better taste, usually they just want whatever they find on the floor. Heh.

5 Star Foodie: Thanks!It is, you should try it!

Syd: Thanks, that makes me feel better. ;) Heh, if you like my team, tune in every Sunday. I do a post about them each week.

Anonymous3: Good to know, thanks.

Aggie: Yay fresh eggs! Can't wait to see what you do with them. Thanks! I just found out about being featured, I need to go check it out. :)

Elle: I'm sure those will be fine. At least this cycle isn't vicious. Heh.

Clownwacko: Thanks, I'll have to try the salt next time.

I just had to come back and tell you this. I couldn't get this damn sammich out of my mind. So, for lunch I scooted around the corner to the drug store that still has an old fashioned soda counter (don't you love those?).

Ordered their egg and olive sandwich...walked (practically skipped) back to my office...unfolded the wax paper...a GRILLED Pimento cheese!! They got my order wrong! Who grills that, anyway?

Syd: That sucks! I hate it when places get my order wrong. Hope you get to make up for it tonight. Maybe have a little drink with it, you know, for your troubles. ;)

Try this - we've tried it and it works EVERY TIME!

You've got the pure, unadulterated egg salad going on. You can taste all the eggy-ness. Totally love relish, paprika, dijon mustard and sometimes a little celery in ours.

I use half mayo and half miracle whip and pickle relish with a touch of mustard, salt,pepper and seasoning salt.

I have found the best way to avoid stuck shells is to not add the eggs to the water until it is boiling.

A little mustard and/or smoked paprika and/or worcestershire sauce are musts for my egg salad. I too like the deviled-like flavor

Your cats are just like mine!! Have to check everything out. Don't you just love em? I am not feeling too good, I think I might just have this for dinner. I like egg salad on squishy white bread too. Maybe it's the softness factor. Just with a little seasonings and maybe some lettuce. Try putting a whole bunch of salt in the water when your cooking them like a tablespoon or even two, always works for me.

MMMM Egg Salad!!
How do I like mine? Let's see, finely chopped red onion, capers and aoli...maybe some dijon, but not always.
Sometimes with Pesto and extra pinenuts..

I prefer mine just like yours. I've also heard that fresh eggs are harder to peel. Who needs all that egg white anyway?! It's all about the yolks!

Look out, I might bite you!
I love egg salad. LOVE IT.

I make it the same way except add some pickle relish to it ( and the mustard has to be Gulden's spicy mustard). YUM.

and HELLMAN's MAYO ONLY PLEASE.

You make me want egg salad!!!

biz: I will, thanks!

duo: Yep, that's how I like it. Especially with the super-yolky farm eggs.

Joan: That sounds good too. :)

Reeni: I do love em. Hope you feel better! I will try the salt.

Anonymous4: Yeah, cayenne is a good time with eggs.

Culinary Alchemist: ... pesto? You're a genius! That's so next.

Oh man, I love it on squishy Wonder white bread.......oh, I can almost taste it.

I have something for you over at my place-my site, that is (it looked funny when I re-read it!)

Seeing this was a 'ta-dah!' moment for me. I have two lonely eggs left in the fridge and now I have a craving for egg salad sandwich!

My favorite way with egg salad is to put it on top of fresh steamed asparagus. Sounds weird but oh my gosh, it is SO good.

The Food Hunter: Thanks!

tamilyn: That's the stuff. Thanks for the something! ;)

Lyn: Sounds good to me! I love asparagus.

I haven't had an Egg Salad sandwich since my Grandpa died 10 years ago. Ah, the memories

Mmm, I love egg salad...just not the really mustard-y kind. Eggs truly are the wonder food, aren't they? Delicious in so many different ways...

bakingblone: I'm not sure I could go ten years without egg salad...

Hayley: They totally are. I'm not into too much mustard either, I want to really be able to taste the eggs.

Okay..the easiest way to make and peel hard boil eggs is this...bring water to a boil.. place your eggs into the water wait about 10-12 minutes then take the eggs out and place them into ice water.. after a few minutes (about 10) I take an egg out and lightly hit the egg on the counter all the way around to crack and make it easy to peel.three reasons I do this..1. I like cold egg salad and 2. They are easier to handle and 3. its easier to peel. I have heard that older eggs..not fresh from the store maybe a few days to a week old..are easier to peel then fresh ones..I am not sure about that...Also, I like green onion and a little bit of dill pickle relish in my egg salad.

YUM!! That looks so fluffy & delicious! I love your quality control group!