Seared Steak Tips with Asparagus in a Lemon-Mustard Pan Sauce

That's quite a title, I know, but I can't think of anything else to call this dish. At least it's descriptive. Heh. Now I've covered this basic method before, but it's a great method, I do it a lot and this time it's asparagus instead of broccoli. So it's different. Basically what I do is sear the beef, make a pan sauce and then cook the vegetables in said sauce. You can do this with pretty much any veggie you want and anything you can sear and get a good fond from. This time around I'm using steak tips and asparagus.

The sauce I made is very basic, mostly because I didn't have a lot of stuff on hand. But if you wanted to fancy it up you could add some shallots, thyme, rosemary, a splash of red wine or whatever else tickles you. I use water when I make this kind of sauce because I want to be able to really taste the vegetables and I've found using wine or even broth can overpower them. I'm not posting a recipe for this, partly because this is a concept, not an absolute and you should experiment with it and learn how you like it best. But mostly because I didn't measure anything. I'm like that sometimes.

First things first, season the steak with salt, pepper, garlic and onion powder. Then sear the steak in some butter. 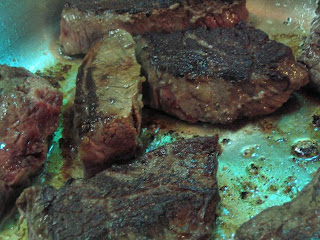 You could use olive oil or something like that, but I think butter is best. This time I actually did equal parts butter and bacon grease. Because I'm a madman. Don't be shy with it either, it's not just for searing the steak, it's also the base for the sauce. When the tips are done transfer them to a plate and tent them with some foil. 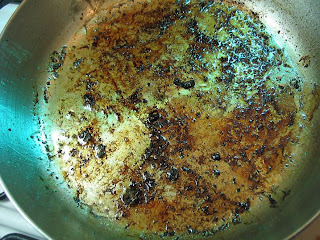 That's the fond you want for this kind of thing, dark and plentiful. Deglaze the pan with about a half cup of water. 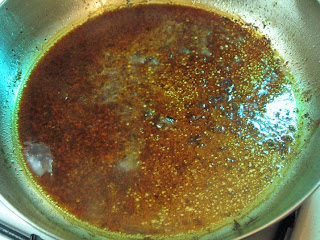 Now let it reduce till it's maybe a quarter cup or so. Then toss in the asparagus and stir it around for a minute. 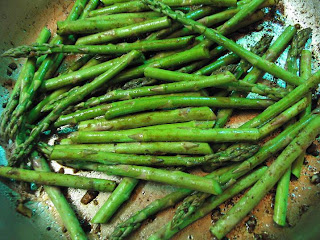 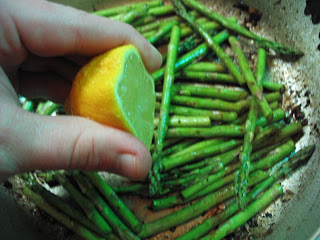 How much? How lemony do you want it? A tablespoon will give it a hint of lemon, the juice of half a lemon will make it a dominant flavor. I used half a lemon because my girlfriend loves the stuff. Add some mustard, I used about a teaspoon. 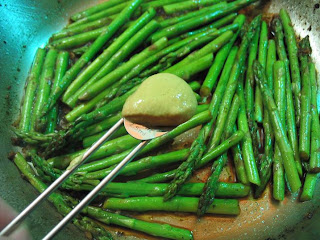 I think. Then just cook the asparagus till it's done, stirring occasionally. And that's it! 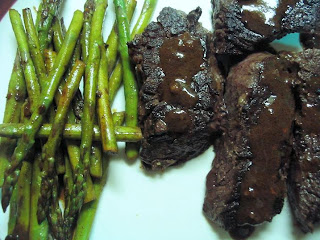 This can be done in less than a half hour, so it's a great weeknight meal. Plus it only uses one pan, so that's a bonus too! I think a Hefeweizen would be perfect with this, to match the lemon.
Email ThisBlogThis!Share to TwitterShare to FacebookShare to Pinterest
Posted by Bob Labels: asparagus, beef, one pot meal, sauce, side dish at 2/06/2009 11:40:00 AM

Mmmm, steak and asparagus. I don't think I have ever done a lemon-based sauce with beef though -- I will have to try that when my cholesterol intake allows me. Kaje's friend with the hobby chickens was by the office by the way (speaking of cholesterol), so I have some fresh eggs -- like hours to a couple of days from the hen fresh -- want a dozen?

Quick and easy and it sure sounds good.

Brutal: Yes. Yes I would. Thank you. Heh. The lemon sauce was good with the beef, lightened up the flavor.

Karen and Spryte: Thanks! :)

Oh my god, look at that beautiful fond! The whole thing looks delicious :D. Is it dinner time yet??

+Jessie
a.k.a. The Hungry Mouse

Love the beef tips. Asparagus makes me think of spring - I hope it's coming soon!

Oh, you're killin' me over here! My two of my fav things, mmmmm mmmmm mmmmmm

Absolutely delicious looking, and I don;t even care for beef... YUM!!

These look delicious and my BF loves asparagus!! We don't have it enough so this may be a good excuse!! Thanks!!

I am so jealous of your fond :)

5 Star Foodie: No, no spring yet! I haven't done all the baking I want to do while it's still cold. Heh.

ChefBliss: Let me know how it turns out for you if you make it. :)

Vicki: Thanks! Good fond is key.

That really looks delicious. Now...if only I could get my husband to eat asparagus! (I love the stuff.)

Gwen: Thanks! You could always try to trick him. ;)

That is really nice fond. Can one be jealous of fond? I think I am. The beef looks great. Too bad we don't have Smel-O computers yet.

tamilyn: I think it's totally possible to be jealous of fond. ;) Thanks!