Sunday Cats, a Sandwich and Some Rambling

I don't know if it's a lack of inspiration or just one of my periodic urges to indulge, but I've eaten three grilled cheese sandwiches today. Grilled cheese is the bomb. 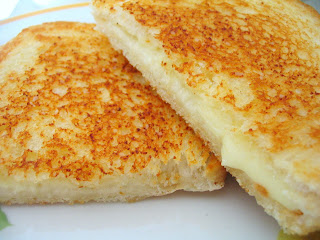 I suggest everyone make one soon, especially if it's cold where you are. There is nothing like a grilled cheese on a cold day. But I suppose that doesn't really have anything to do with cats...

I think this post was originally put together around the time they started forgetting that they were ever not living together. They had mostly stopped startling when they would meet up, there was almost no hissing anymore. It's weird how short Noodle's ruff was then, it's so long now.

I think they are going to be just fine
(Originally posted 8/1/08)
So the babies are getting along much better. They are playing more and fighting less.

They even shared a plate of tuna water without so much as a grumble!

Soon we might even be able to leave Noodles out when we aren't around to referee. As I write this Noodles is chasing Bob around like a psychopath. He charges off, she goes after him. He runs under something, she hides. He looks for her and she jumps out at him and chases him some more. No hissing, ears forward. It may not be peaceful, but at least it's not violent. Heh.
Email ThisBlogThis!Share to TwitterShare to FacebookShare to Pinterest
Posted by Bob Labels: cats, sandwich at 2/22/2009 12:34:00 AM

alright peace amongst the cats! takes kitties forever to finally get along...but you know your kitties are doing good. Volunteering in the kitty shelters I've known cats to take a lot longer, so count your blessings.

I've eaten a lot of grilled cheese too, but I always have to kick mine up a few notches by adding something to it, unless it's that organic cheddar cheese from Whole Foods deli--that sutff needs nuffing added.

love the kitties. I see in more recent updates that they are even more in love lol.
I too just had the most marvelous grilled cheese. I made a crockpot full of potato corn chowder and what better to go with it but ooey gooey crispy grilled cheese?! I used a fresh loaf of rustic bread (cant remember what kind) with slices off a hunk of Gouda and a slice of smoked Rofumo (reminiscent of smoked Gouda) topped it with carmelized onions and grilled it in 14 pounds of butter over med high heat to get it nice and crispy (I turn the heat higher and then take pan off stove now and then so it doesnt burn)... yummmmmy

Mmm, nothing wrong with grilled peanut butter sandwich. Add some chocolate chips and it can be dessert :)

And some tomato soup....that would be good.

You can never go wrong with grilled cheese! Cute cats too :)

Grilled Cheese rules!! Do you add a little bit of mustard to one slice of the bread? It kicks up the cheese a little bit. I've had a grilled cheese and an egg salad sandwich in the past two days thanks to you.That's good that your pretty kitties are getting along better, if only that would happen at my house.

Dawn: Tell me about it, some cats never get along. We're wicked glad they are so friendly!

Brutal: Or some Nutella...

Reeni: I have done that! Awesome! Heh, I love to hear that people make what I've posted. Thanks! :D

I've been dying for a grilled cheese... with plain old American cheese. I have a gazillion different cheeses in my fridge... but do I have American?? Noooooo!!!!

Spryte: American is my favorite for them too, there's just something about it. Probably because that's what my mom always used. :)

grilled cheese is a total fav at our house! Can't go wrong with cheese!

Thanks for sharing! What a yummy looking pic!

Yum! Have you submitted this to the Grilled Cheese Academy yet? http://www.grilledcheeseacademy.com/submitrecipe