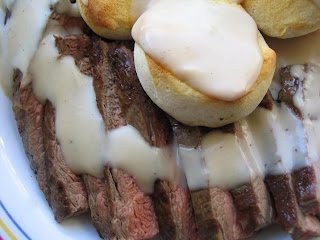 Devastating, isn't it? The good news is that this was wicked frigging good. I think it probably took a year off my life, but it was a year well spent. The bad news is, I have almost no pictures of me making the gravy. I don't have a tripod or a timer (that I know of) and gravy comes together pretty quick and needs constant stirring. But the method I used is from Pioneer Woman and I did it exactly like she says to. Except for the changes. For one I didn't use any sausage, I seared some flank steak in bacon grease to get the fond. 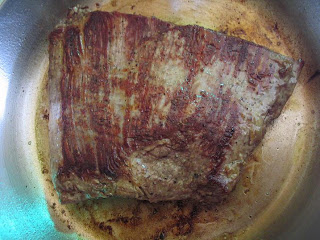 Once the steak was done I set it aside to rest and added a bit more grease to the pan. I wanted about two tablespoons worth and I hadn't used near that much to sear the steak. Now some of you might be asking, where did all this bacon grease come from? Well, I save it. I have a mug in the fridge half full of the stuff. It's the best for frying burgers. Heh. Anyway, then I added a couple tablespoons of flour. 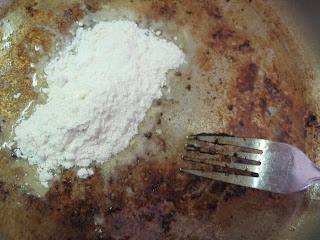 This is where the picture taking stops and if you pop over to Pioneer Woman you will see why. Lots of stirring. But she has lots of great pictures of it because she has mad skills. This kind of gravy (often called white or country gravy) is an awful lot like a white sauce but with meat drippings instead of butter for the roux. You also brown the roux much more than you do for a white sauce when making a country gravy. The other change to the original, besides the bacon grease, was that I added the juices from the rested steak. 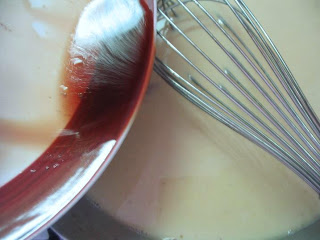 This gave it a great beefy flavor, but not enough of one to overpower the bacon. Of course, very little overpowers the flavor of bacon. Bacon is the Godzilla of food. You don't control bacon, you let it loose and hope it doesn't cause too much mayhem! 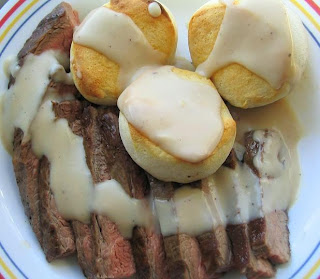 Email ThisBlogThis!Share to TwitterShare to FacebookShare to Pinterest
Posted by Bob Labels: beef, comfort food, sauce at 2/09/2009 12:00:00 AM

Oh well this is dang awesome. Bacon gravy, seriously this is awesome and oh so yummy.

My mother used to keep a jar into which she'd drain bacon fat after frying them up for breakfast. She would then use it later for other cooking needs. I didn't keep up with that tradition and now I regret it!

and yeah... trying to photograph making gravy can ruin your day!! (and your gravy!)

(and in response to your comment on my blueberry muffins, you could easily use peaches instead of blueberries; I've tried it, it's awesome)

Culinary Alchemist: Thanks! I know, I'm a madman. ;)

5 Star Foodie: It was good, thanks!

Tangled Noodle: It's useful for so many things. It adds a great flavor to anything you need to fry or saute.

Dawn: Peaches? I love peaches! I'm so doing that. Thanks!

I made bisquits and bacon gravy on Saturday morning! Great minds think alike. I like the smiley picture of the food.

No brandy in my fruit compote because of the kids, but you're right, it would have made it better.

WOW!! Meat, gravy and bread. It just doesn't get any better than that. I can taste that bacon gravy right now!

I'm dying to try biscuits with gravy! I hear everyone on bakespace talking about it and I've never tried it!!! Looks heavenly!

You had us at bacon gravy and biscuits. That's a Southern meal in itself!

I'd want this for breakfast!

We had flank steak on Friday night, but with mushroom gravy. This looks absolutely tasty!!! Because really, bacon is just a way of life! I'll have to try this, Thanks!

That is a real meal!! No messing around!

Bacon gravy is the bomb!! And biscuits, yummmm, awesome dinner!!!

Joie: Nice! Heh. Yeah, I figured you wouldn't put any in with kids around, I was just playing. :)

chuck and Kevin: Thanks!

Michele: It's wicked good, I can't imagine you wouldn't like it.

duo: True, but I had to have something to make some fond. ;)

Karen: It was a great breakfast, even if we didn't move around much for a while afterwards. Heh.

ChefBliss: Thanks! Bacon truly is a way of life.

Maria and Reeni: Thanks! :)

Bacon gravy! I'll have to remember this recipe!