Heh, I seem to be going on a stuffed stuff kick here. First the stuffed French toast and now stuffed burgers. Have you ever done this? It's awesome. Mine almost always pop open somewhere, but whatever. It's not a neatness contest. One word of warning, I haven't found a way to make these any way but enormous and still have a decent amount of filling. We're talking big enough for two. You can do it with smaller patties, but you can't fit much in there. Especially cheese, that stuff just want's out. Anyway, here is how I do this.

First what you want to do is form two thin patties. Like this one, here. 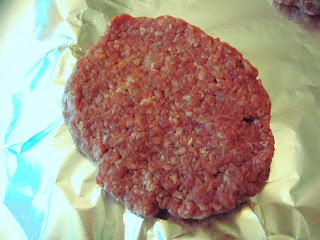 But two. I usually just season the meat with some salt and pepper, but you could do it with whatever you like. Then you want to put on some stuff. I like cheese 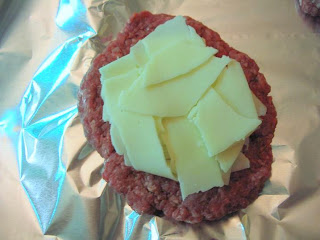 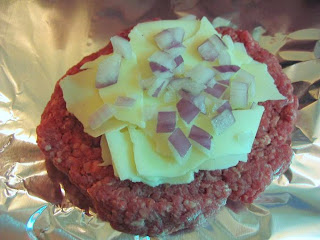 Bacon is good too. If you are into mushrooms, that would be fine. Caramelized onion, jalapenos, peppers, fresh basil, ham, whatever sounds good. Make sure to leave some space around the edge. Then put the other patty on top 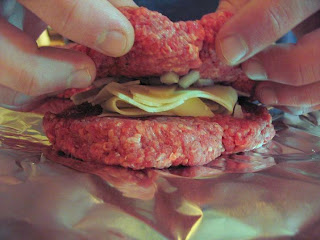 and squish the edges together. 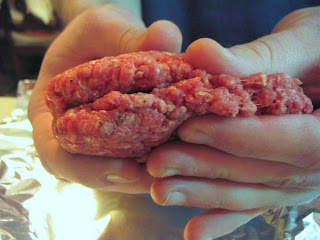 Then form it into a nice (and huge). Now unfortunately, you do have to handle the meat a fair amount, so it won't be super tender. But I find the trade off more than worth it. Now plop it in a hot, greased skillet. 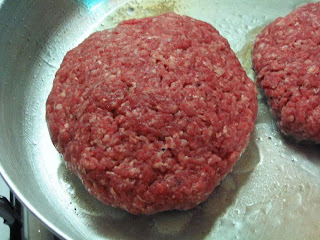 Sear it on both sides. 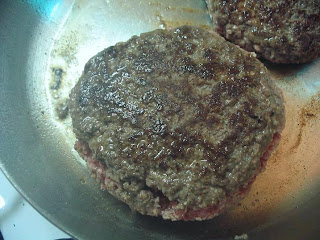 See how it's popping open there? It happens. Once both sides are nicely browned reduce the heat to medium-low, cover the pan and let it finish cooking. How long depends on what it's full of and how you like it. Anywhere from 5-6 minutes to 10-12 or more. Not very helpful, I know. Sorry about that. But the end result? 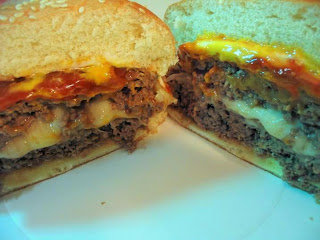 You can't beat that. I just put a little ketchup and mustard (less than it looks like in that picture) on mine this time. Not very fancy, I know. But so very good.
Email ThisBlogThis!Share to TwitterShare to FacebookShare to Pinterest
Posted by Bob Labels: beef, cheese, hamburger, main dish, sandwich at 1/17/2009 01:11:00 AM

THESE LOOK AND SOUND BRILLIANT ! I am going to try this idea next time we have burgers for dinner. I think I might go with cheese, ham and maybe chilli relish - I'm lovin'it already :) Cheers

I never thought to do this. I always stuff my burgers with butter, but next time I'm going for spicy cheese and bacon dude! LOL
Did you get a kick out of that cat video I have on my last post? I was laughing so hard over that one, and knew all my cat lovers would love it.

Angela: Thanks! I bet chili relish would be awesome. Let me know how they turn out.

Spryte and noble pig: Thanks! :D

Dawn: I've done it with bacon before, it's the bomb. I bet pepperjack in there would be a great match. Heh, yeah, that video is awesome. :)

My mom made these when we were kids... she called them "surprise burgers"!

My mouth is watering!! I want that for dinner!! YUM!!!

It's been months since I had a burger! I wish I could take a bite!

Michele: Once Shane gets that food fax set up I'll send you one. ;)