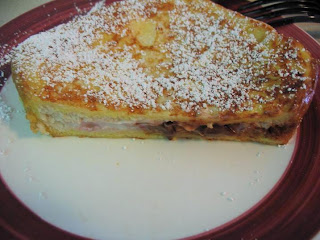 Heat a griddle to medium. Mix together the cream cheese, sugar and vanilla. Fold in the chocolate chips and cherries. In a shallow dish (like a pie pan) mix together the eggs and milk. Spread the cream cheese mixture over two slices of bread, then top with the other two to make a sandwich. Dip each sandwich in the egg, pressing down slightly to get it up the sides, then place it on the griddle. Brown it on both sides, 3-4 minutes each. Serve with powdered sugar.

If they aren't heated through after browning you can place them in a 350 degree oven for a couple minutes.

So other than more pictures of my cats, more breakfast stuff was also requested recently. So I poked around the net and came across this stuff. I had never heard of stuffed french toast till just a little while ago. Then all of a sudden I saw a whole bunch of recipes for them. I liked the sound of it, so I decided to whip some up. I liked them a lot, they were rich, eggy, sweet and gooey. I like that in a breakfast. You can of course change the filling to suit your tastes, I happened to have cherries and chocolate chips on hand. It would be good with any fruit or berry.

First things first, the filling. Put in a bowl the following: cream cheese, 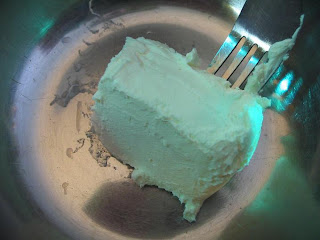 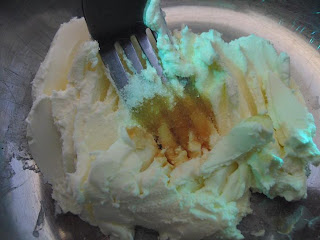 Mix till soft and well combined. 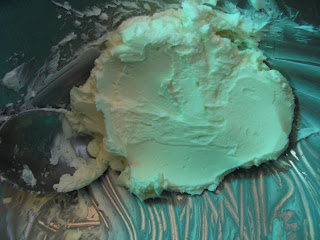 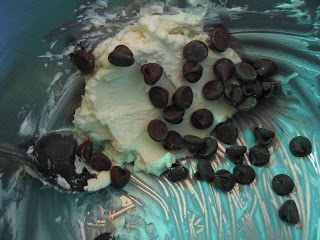 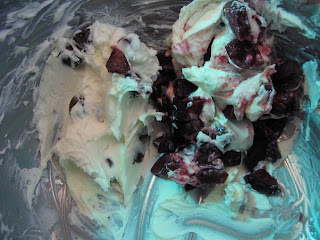 and fold them together. 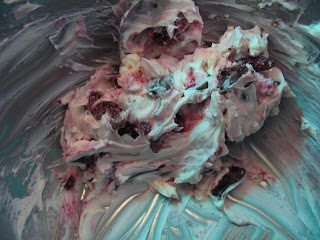 Now in a shallow dish, like a pie pan or my wicked cool Spaghetti-Os bowl, mix together the eggs and milk. 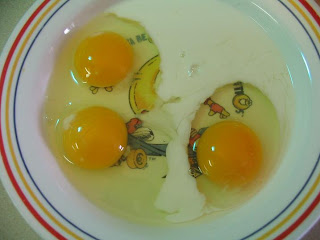 You want a dish with high sides so it doesn't make a mess when you mix it or slosh bread around in there. Next take two slices of bread and spread the cream cheese mixture onto them. 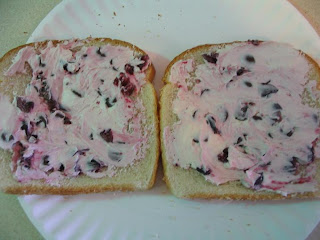 You could use any kind, I'm using crappy store bought white bread. It's what I could get. Now top it off with another piece of bread so you have a sandwich thing. 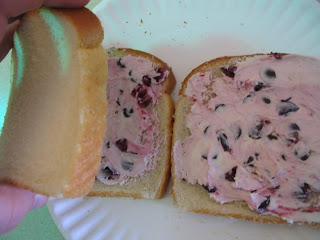 Dip that in the egg, 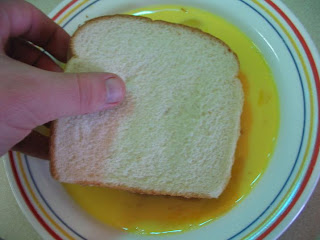 making sure to push it down gently to get the egg up the sides, 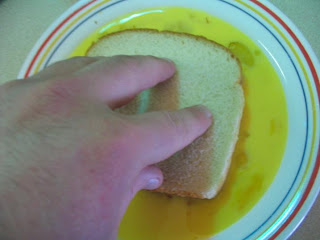 flip it over to get the other side, 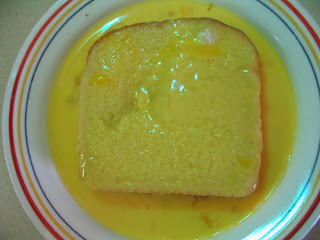 and slap it onto the griddle that you have had preheating. I also suggest slathering it with butter first. 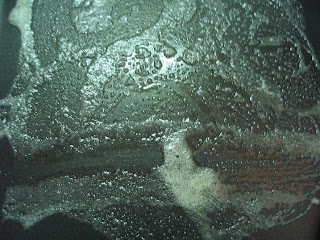 Just to make sure they don't stick, of course. 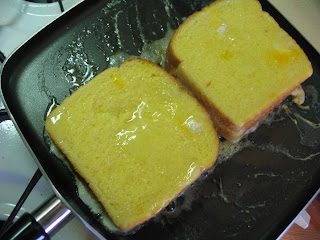 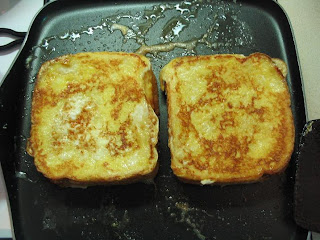 Let the other side brown and there you go. 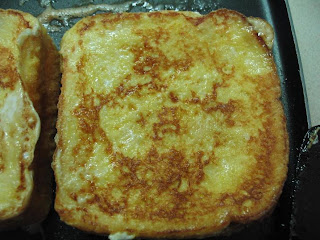 A little powdered sugar and it's breakfast. 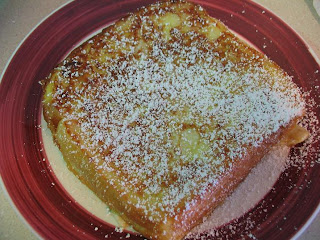 Or dessert. Or a midnight snack.

I don't see why you couldn't do a savory version of this either. Some cheese, onion, bacon, peppers, you know; omelet fillings. Maybe some seasonings in the egg like garlic and pepper. Toast the one side of the bread before putting the filling on... Yeah, that would be good. I'm going to have to try that.
Email ThisBlogThis!Share to TwitterShare to FacebookShare to Pinterest
Posted by Bob Labels: breakfast, cheese, chocolate, dessert, eggs, fruit at 1/12/2009 06:45:00 AM

Woo Woo Bob! I like your version of stuffed french toast!!! We could have a Stuffed French Toast competition but I think we would both win! How could there possible be losers when in comes to French Toast lol?

Come on my blog...I posted something especially for you!

Christine aka Mistress of Cakes

Stacey: Thanks, decadent is definitely what it is. :)

Mistress: Thanks! I'm intrigued by the idea of a stuffed french toast competition... if everyone wins that would just make it better. :)

I know right..what could we all win? Maybe each person could send one other person a prize??? lol..there are possibilities!

I tagged you on my new blog post for Luck and Resolution!

Haha now you get to tortured!!

Christine aka Mistress of Cakes

My mouth is watering! So delicious!!

How did you know that's what I wanted for dinner? You're so in tune to my needs, Bob ;)

Melissa: I aim to please, just don't tell my girlfriend. ;)

This looks fantastic! I totally want a Monte Christo now!

That looks amazing. I think I would have it for dinner with some prosecco : )

Holly: Heh, I could go for one myself.

Caitlin: That sounds good to me too! :)

How creative! Damn, you work that griddle!
Love this, just love it.

Dawn: Heh, thanks. Wait till you see the next one, it will have sausage. :)

Karen: Thanks! I actually just made the savory one, it was wicked good. I will be posting about it tomorrow probably. :)