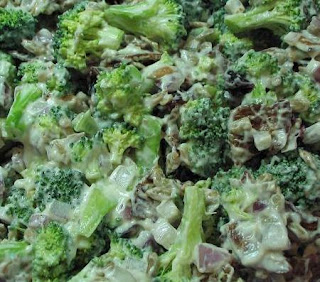 Mix up the dressing. Toss everything together till coated evenly, let chill for at least 1 hour.

I hadn't had broccoli salad in forever, and forgotten about it completely, when I saw this post over at How to Cook Like Your Grandmother. Then I remembered it was wicked good and I had my mom's recipe for it. So, I made some. I swapped out the raisins for craisins, which I like a lot more. And I left out the mushrooms, obviously. Now that, while not unexpected for me, actually caused a minor problem. I should have also cut out some of the dressing or added a cup of something more. There was a lot of it for the amount of stuff in the salad. But I didn't even think of it. So, if you're thinking to yourself "damn, that's a lot of dressing on there", you're right. If you leave in the mushrooms, add an extra cup of broccoli, cut down the dressing or add something else and it won't be as saucy. 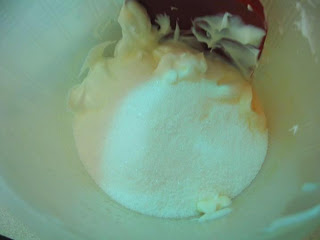 which aren't the most exciting photo subjects, especially in a milky plastic measuring cup. I, er, forgot about the lemon juice. Whoops. Now dice some onion, 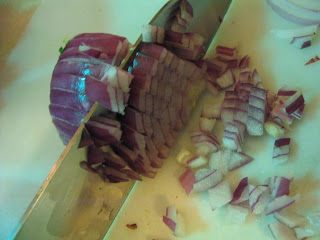 you need a quarter cup. 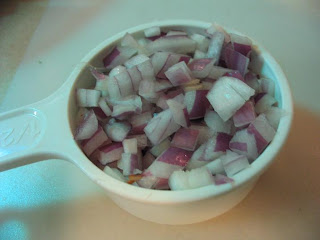 I apparently used a half cup. But it was still good. I added the onion to the dressing to make sure it was evenly distributed. 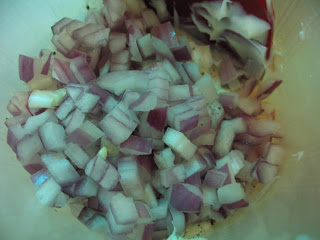 Then I mixed that up and let it sit till I had the rest of the stuff ready. 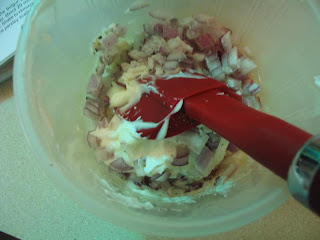 Next you need some broccoli. 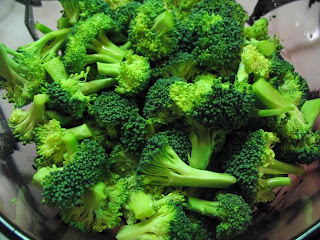 Four cups, five if you are omitting the mushrooms. If you haven't already, I suggest cooking your bacon because you need to toss that, the seeds and the dressing in the pot 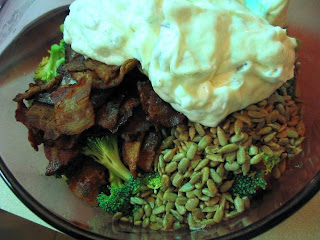 and mix it up. Now toss in the craisins, since you forgot to before. 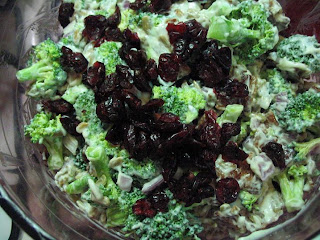 And there you go. 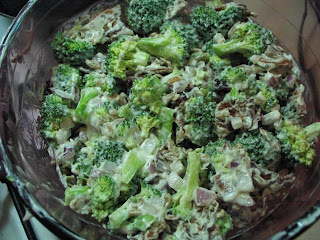 Now just let it chill for at least an hour and then you will be ready to consume the deliciousness.
Email ThisBlogThis!Share to TwitterShare to FacebookShare to Pinterest
Posted by Bob Labels: bacon, broccoli, salad, side dish at 1/13/2009 12:55:00 PM

I love, love, love brocolli salad, but I don't remember Mom making it! Ha! I love mushrooms, too, so I won't even have to adjust the dressing.... You know, I have all of this stuff...I might just have to make some.

Dude!!! This is my favorite salad!!! My friend always brings it when I have a cookout!

Whitney throws in a handful of shredded cheddar =)

Deb: I don't remember mom making it either, but she claims it as her own in a cookbook she sent me. So who knows? Maybe she is stealing. That would be hilarious. :)

Spryte: Nice. I bet the cheese is good in it, crap I had some too...

Hmmm...now this is a good way to eat your veggies right?
I think I would do what Spryte and put a bit of cheddar in there. No craisins for me...they are just odd little nuggets of whatever.
Bob, you're the man for using bacon in here!

This sounds great! I love broccoli. It's probably my favorite veggie - when I was younger my mother used to have to tell me NOT to have broccoli and try something else. Imagine telling your kid they eat TOO MUCH broccoli?

I love broccoli salad too...hubby does not...what's wrong with him? It tastes so good and crunchy. You gotta love the crunch.

Dawn: It's definitely a good way to eat your veggies. They're even raw, which is the healthiest! Well, except the bacon. Bacon is a vegetable, right?

Maris: Ha! That's great. I didn't like broccoli when I was a kid, but it's my favorite now.

noble pig: Hmmm, have you tried pricking him with a pin? He might be an alien. ;) Yeah, the crunch is awesome.

Ooooh broccoli salad! Ain't nothing wrong with adding mayo to anything.

I'm not a huge fan of broccoli, I don't hate it, I just would rather not eat it! Ha! But I would try this, the dressing looks good. How do you think it would be with Cauliflower instead?

Mmm, did you know broccoli is my favorite vegetable? This salad looks splendid.

I can never spell broccoli by the way. Like Debbie.

Emily: Thanks! I didn't know that, it's my favorite too. I'm just glad Firefox has a built in spell checker. :)

You don't remember mom making it because the recipe is Laura's :)

I love making this salad, and would also suggest lightly toasting the sunflower seeds first.

My sister in law makes a broccoli salad w/ bacon, cheddar, red onion and a mayo dressing, it sounds gross, but it is SOOOO good!
I have a head of broccoli, going to try this!

I like it too, but I recommend a) replacing the mushrooms with fresh snow peas and b) using homemade mayo. These days, if I am going to have all that fat, I want it done right. Bacon and homemade mayo are definitely done right :)

Kaje: Ah, that would explain mom never making it. I bet toasting them would have been awesome.

Stacey: I bet the cheddar is awesome, I wish my girlfriend would eat it. I could always sprinkle some over mine...

Brutal: Yeah, snow peas would have been good. And homemade mayo is great, but not always a viable option.