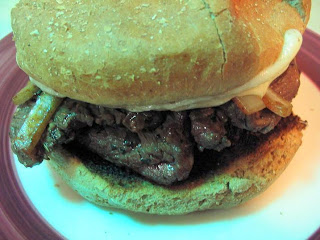 NOTE: The measurements are guesses, I didn't really measure anything. Sorry about that.

Mix together the garlic, rosemary, basil, vinegar and oil. Season the steak with salt and pepper then put it in a zipper bag with the herb paste. Mix the meat around till evenly coated and let marinade for at least 30 minutes. Heat up a pan with some butter, hot. Cook the beef in batches, till browned and cooked through. Move to a plate and tent with foil. Reduce the heat to low and add the vegetables. Stir them around then spread them in an even layer. Let them cook till almost as done as you want them then pour in any juices the steak has put out. Stir around a bit then pull them out. Toast a roll under the broiler. Pull them out and put a couple slices of provolone on the top one , then return it to the broiler to melt the cheese. Put the steak on half the roll, top it with peppers, onions and the cheesy roll top.

This is a serious sandwich folks. It's not pretending to be something it's not, it's just a big slab of beef, onions, peppers and cheese. I really liked it, my girlfriend wasn't as excited. It worked out to not be very heavily spiced, which I like. But she likes things more powerfully flavored. This recipe was kind of a hip shot, so I don't really have any good measurements. You could use other cuts for this, like a flank or skirt steak. I just happened to have tips, so that's what I used. Here's what I did.

I took a bunch of minced garlic (ok, I used a garlic press. I admit it.), some dried and crushed rosemary and basil 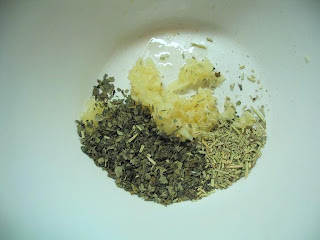 and mixed it together with some oil and vinegar. 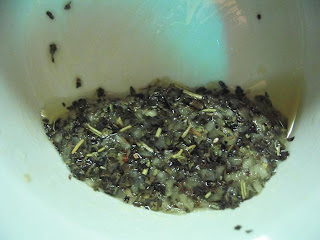 I set it aside as I prepped the steak. 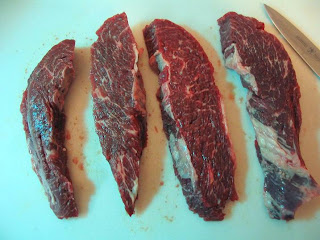 I love steak tips, they are good for so many things. I cut them into thin slices and seasoned them with salt and pepper. 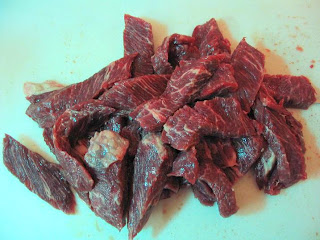 Then tossed them into a zipper bag with the herb mixture 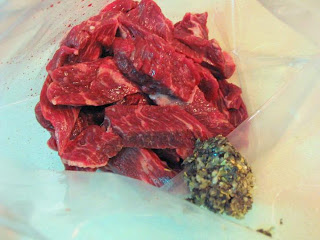 and smooshed it around till the steak was all coated. The act of smooshing them enough to get them thoroughly coated ripped up some of the slices, but everything came out fine in the end. I let that sit for about a half an hour. Then I heated up a pan scorching hot and melted some butter in it. And cooked the steak in batches. 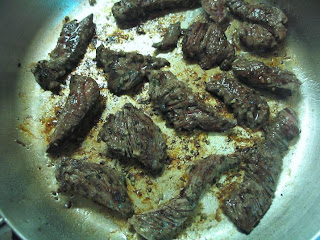 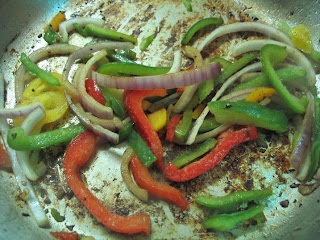 The veggies released enough liquid to deglaze the pan some and after a bit I poured in the juices the steaks put out. If I had had some red wine I would have used a bit of that, I bet it would have been wicked good. I just sauted the veggies till they were still slightly crisp and called them done. 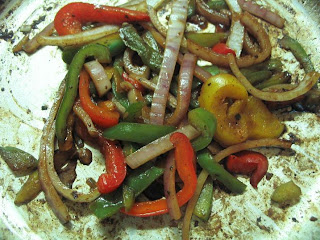 Next I piled a roll I had toasted with the steak, 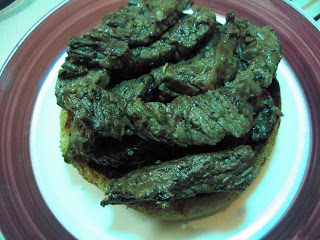 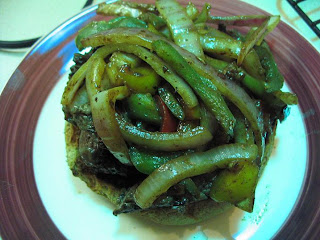 Then I melted some cheese on the top of the roll under the broiler and topped it off with that. 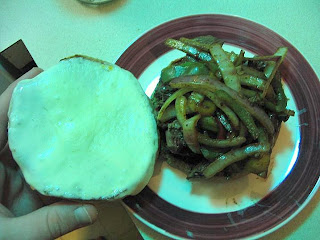 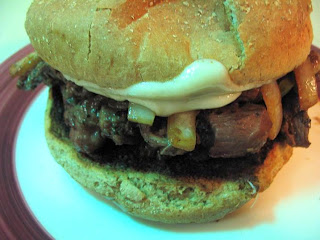 One kick ass sandwich. If you like spicy, I think it would have been good with a little red pepper flakes or cayenne or something. Maybe even a sliced jalapeno in with the veggies. Yeah, that would have been good.
Email ThisBlogThis!Share to TwitterShare to FacebookShare to Pinterest
Posted by Bob Labels: beef, cheese, experiment, frozen veggies, sandwich at 1/22/2009 11:13:00 PM

I love sandwiches you have to eat with a fork and knife lol. This gives new meaning to the word "Manwich"!

This reminds me of a sandwich I used to get in Long Beach. So delicious with the peppers and onions on it!

Wow!! I would have eaten all of that steak right out of the pan!! YUM!!

That sandwich is making me hungry!

Karen: How did they make that one, do you remember? I'm always looking for new ideas.

Spryte: Funny you should say that, the last bit of the veggies and steak just got mixed together in the pan and eaten with a fork.

You know how I don't like meat all that much? I love cheesesteaks and I would eat this!!! It's kind of the same thing, only better, cause your steak is more like the real thing!!!

That looks great! I would take the leftovers, fry an egg and eat it for breakfast! Steak and eggs with peppers! WOW!

Reeni: Heh, thanks! That's pretty much the deal.:)

Can I come for lunch? This looks awesome Bob!

Love the combination. Provolone cheese, peppers, onions, and the steak, so very delicious. Love the step by step photos!Your girlfiend is very lucky to have you cook for her.

noble pig: Sure! Just let me know when and I'll start the tips marinating. ;)

Donna: Thanks! That's what I keep telling her... :D

Oooh! My favorite part is the first picture with the onions and bell peppers just starting to sizzle in the pan . . . and then it keeps getting better from there!

Hayley and Tangled Noodle: Thanks! :)