Update: I've entered these babies into the Potato Ho Down over at Noble Pig. Good times.

I've posted about these potatoes before and it's well past time for a followup. Since they first appeared on Pioneer Woman Cooks I've seen a lot of variations of them on various cooking sites. She did them up with just some rosemary, olive oil, salt and pepper. I've done them like that and it's awesome. When I did my first post on them I made them with garlic butter and it was wicked good. This time I decided to make them several different ways at once. Some with cheese, some with bacon and some with... well, garlic butter. Like I said, it's wicked good. I'm not going to repeat the recipe, since it's already on here, but I will show you guys what I did.

First I boiled up my baby red potatoes. 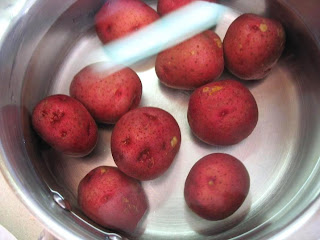 I've found reds are really best for these, they just taste better. I don't know why, but there it is. Then I smashed them down on my oiled, foil lined baking pan. 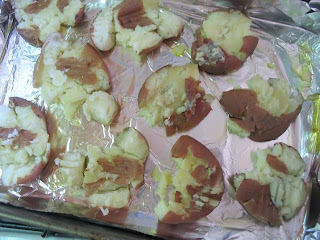 Salt and pepper, of course. Then I put some raw chopped bacon on a couple. 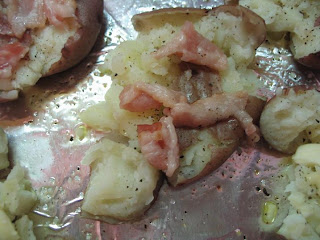 The plan for this was the fat would render, soak into the potatoes and the bacon would crisp. It worked out like that too. I love it when that happens. Next time I would use a little more bacon though. On some of them I put chunks of cheddar. 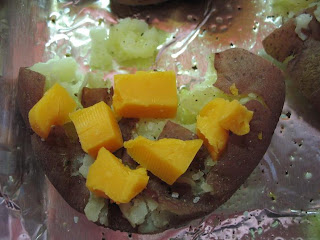 This was the first time I had made them with cheese for some reason. I must be losing it... oh well. Later I topped the cheesy ones with bacon and some sour cream. And last, but not least is the garlic butter. This time I didn't mix up the butter, instead I just put the garlic on followed by a little pat of butter. 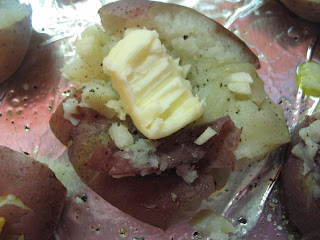 Worked out just fine. Then they got tossed into a 450 degree oven for 25 minutes or so. 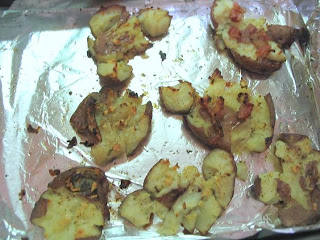 Next time I make them with cheese, I'm going to add it after they have been in for 10 minutes or so. That way the potatoes will have a little more time to crisp up before the cheese gets all brown. But then again, the garlic is nicely toasted. It didn't want to be in the oven much longer either. 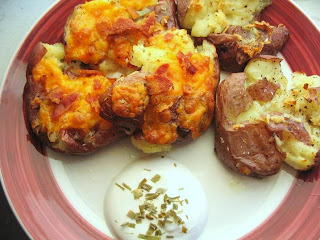 More experimentation is clearly needed.
Email ThisBlogThis!Share to TwitterShare to FacebookShare to Pinterest
Posted by Bob Labels: bacon, cheese, potato, side dish at 1/30/2009 12:24:00 AM

I tried her version too, but spiffed them up my own way the next time. Potatoes-good. Bacon-good. Cheese-good.

You have to make these again! I think they look great.

Emily: Thanks! You should, they are wicked good.

Saw these on PWC too. Love how you dressed them up with the good stuff, the lovin'!

All three ways sound really good. I'm going to try them with the raw bacon on top - that sounds great!

Karen: It was good that way. If you notice, there aren't any of them in the final picture. They disappeared while I was getting my camera...

I made crash potatoes this week for the 1st time. So good.
I like your additions!

Seriously you should enter these into the monthly potato ho down as they seriously rock. I do think you have an inner potato ho.

Stacey: Thanks! How did you make them?

noble: Heh, there isn't anything inner about my potato ho. I was going to enter something else in it a month or two ago, but it wasn't even slightly my recipe so I didn't want to. I'll go check it out now.

Oh wow. I've never seen these before. They look wonderful!

They look fabulous! I can't decide which one I like better.

I've heard of these but never made them -- but you had me at bacon! (sorry, it's bad, I know!!) but thanks for the great food!!

Yum! I've had Ree's recipe bookmarked since she posted it. Why, oh why, haven't I made it yet!?!?

They would be good SB food though.

Reeni: That's the best part, you can make them all at the same time. :D

Vicki: I don't know. You should, they are the bomb!

Oh man...the more I see these the more I crave...you can do so much with these little guys!! Love your bacon and cheese topping...

So I'm wondering what you are cooking up today? Saturdays right? ;)

Serious YUMS going on over these potatoes... and what a GREAT name!

Oh boy, this is not good news for my hips :(

On the other hand, my tastebuds are doing a little dance right now! :)

Ok I've got my potato dish for tomorrow's dinner, they look wonderful!!!

Aggie: Eep, sorry I missed your comment last... month... Heh. And now I don't remember what I made that day!

Lo: Thanks! I wish I knew where the name came from, PW didn't say.

Chinyaray: Heh, can't please everyone all the time. ;)

Bunny: Let me know how it turns out!

Great looking potatoes! I am a big fan of potatoes, cheese, and bacon.

I soooo love these potatoes. I make extra for breakfast the next morning served with a scrambled egg on top...way dangerous good stuff dude!

I keep meaning to post my pictures on my version of crash potatoes-- hint, think heavy cream and parmesan cheese. OMG!!! Yummy!

Elra and Sarah: Thanks!

Danielle: I've been meaning to do that, but I never have leftovers. ;)

Feast for the Eyes: Ok, I'm intrigued. I want to know way more about that.

I've seen these on Pioneer Woman Cooks too. Your version looks amazing!

oh my... these are SO amazingly good! My hubby thanks you (and PW) profusely! I made them exactly as you said. I was a tad nervous about how much olive oil I splashed on the baking sheet and then on top of them. but, as usual you were right, they were perfect! SO crisp and yummy. I sprinkled them with ranch dressing powder, and we were fighting over thirds!!

Glad you liked them, MaryAnn! Oooo, ranch powder would be good with these.

Ok, so guess what I am eating now? Kind of this but not. I onl had big red potatoes, so I cut them in fourths before boiling them. Then instead of squashing and putting butter on top, I kind of roughly smashed them up (pretty smallishly, because the little crispy parts are my favorite) and tossed them in melted butter with some raw pepper and onion slices. Spread it all in a pan (sprayed with Pam, just to be on the safe side; I don't do the foil thing because I don't want to miss out on any little crunchy bits I can't get off the foil), sprinkled with plenty of salt and pepper and then baked the same way for the basic recipe. I am in heaven!!! This is SO good!!

I love baked and smashed red potatoes, with a lot of Mexican cheese, diced jalapeno, butter, sour cream and sat & pepper. Potatoes are the perfect vehicle for cheese. I bet these were delicious!