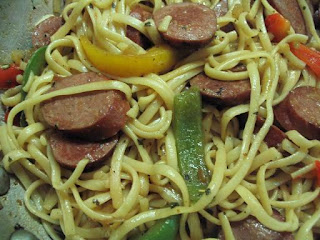 Brown the kielbasa in three shifts, deglazing with chicken broth between each time and reserving the meat on a paper towel lined plate. After the first and second deglazing reserve the liquid to deglaze again, after the final deglazing reserve for use as the sauce. After final deglazing, brown the onion. Once the onion is browned add the herbs and garlic. Saute till the garlic is aromatic, about 30 seconds. Pour the deglazing liquid back into the pan and reduce till it's 1/2 a cup. Add the mustard and butter. Add salt and pepper to taste. Add the peppers and stir it around. Add the kielbasa and mix. Add the pasta and stir till the liquid is absorbed.

Ok, once again I needed something to do with kielbasa. I whipped this up off the cuff, with stuff I had in the freezer and it came out wicked freakin good. I can think of a couple changes I would make, but just as finishing touches. As is it was a great dish. The sauce was very flavorful thanks to multiple deglazings with the same liquid and a little butter added some richness. Now you could theoretically make this with anything, not just kielbasa, but you would want something that leaves behind good fond. That's the key to all the flavor. I used a "lite" kielbasa and I think it worked better than it would have with full fat. The final product wasn't greasy and didn't taste like nothing but kielbasa. Oh, and the measurements on the spices are estimates. Sorry about that, but it's what happens when I'm experimenting. Heh.

First off, kielbasa. Sliced into discs. 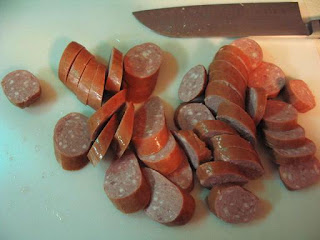 While you are doing that heat up some olive oil in a pan, medium hot. 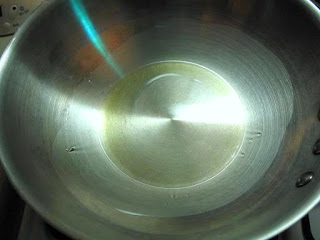 I'm using my stainless steel stir fry pan. I like it for pasta dishes like this because there is lots of room for tossing the noodles around. You want your chicken broth in a container that you can easily pour into and out of, there will be a fair amount of that and you don't want to miss. Now brown up a third of the kielbasa. 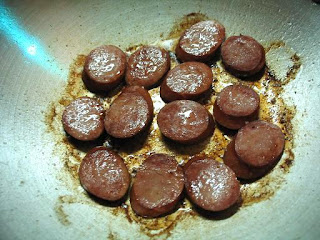 Brown them up really well, you want lots of fond. When the first batch is done, deglaze with the chicken broth. 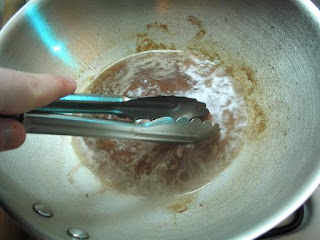 Once it's deglazed, pour the liquid back into the container. 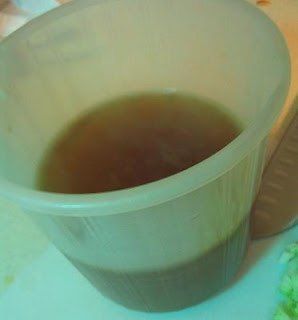 Now repeat, I did it in three shifts. After each batch was browned I put it on a paper towel lined plate. After the last deglazing I tossed in the onion. 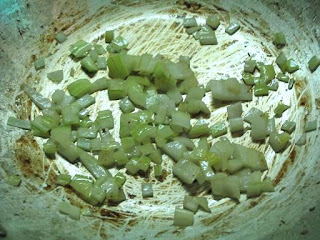 Browned it up a bit, then added the spices. 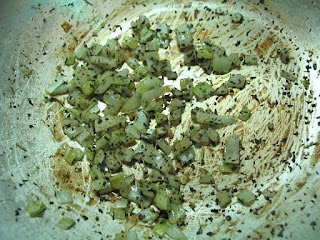 Stirred it up a bit, now you have to be careful not to burn dried spices like when you are doing this. Burned spices are not good. After a minute or so, I added the garlic 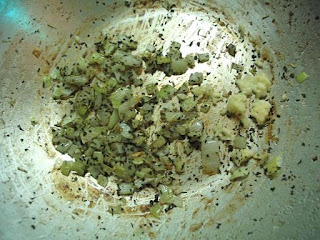 and sauteed till it didn't smell raw and sharp, it usually takes about 30 seconds. Then I poured the liquid back in. 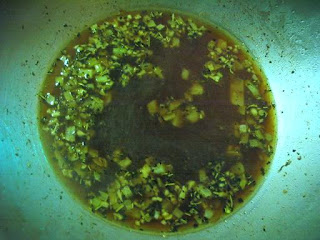 See how dark that is? It hasn't reduced yet, that's pure flavor right there. Then I reduced it to about a half a cup. Which makes more flavor. I was trying to think of something I could add at this point when I was making it and I thought, mustard! Mustard and sausage are a great combo. So I put in this much. 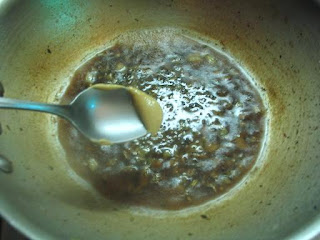 How much is that? I don't know. But I think a half teaspoon would be fine. Soon I will make this again and actually measure everything. I will update stuff at that point. Next I added a pat of butter, because... well, butter. 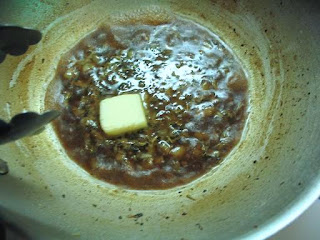 Butter makes everything better. Heh. Plus it adds a good mouth feel and richness to a pan sauce. Then I added some black pepper and a little salt. Then I added the frozen peppers. 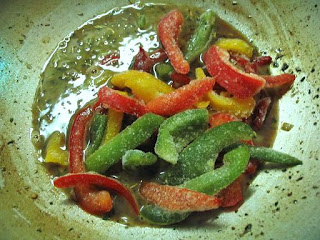 The grocery store I go to sell bags of sliced, frozen, mixed peppers. They are surprisingly good. I've had them in pretty much any application you would want fresh pepper in and while not as good as fresh they are really good. But anyway, I stirred them around to defrost them then added the kielbasa back in. 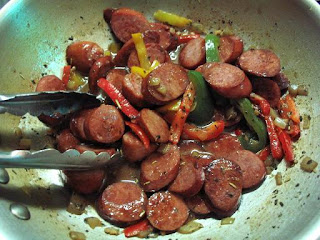 Stirred that around, then tossed in the pasta. 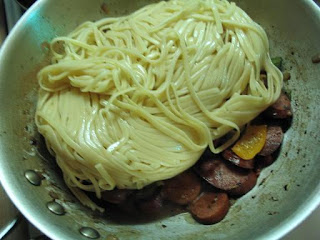 This pasta is not quite done, this way it will absorb all the liquid in the pan and be mad good. I mixed this whole mess around till all the liquid was absorbed and there it is. 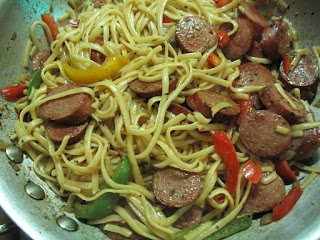 Linguine with kielbasa and peppers. It was really good, but that's not going to stop me from messing around with it next time. And there will be a next time.
Email ThisBlogThis!Share to TwitterShare to FacebookShare to Pinterest
Posted by Bob Labels: experiment, frozen veggies, main dish, pasta, sausage at 1/01/2009 02:41:00 PM

Bob,
My cat and I are looking at this kielbasa pasta dish, thinking how yummy it looks!
Happy New Year to you and the kitties!
Stacey Snacks

I would totally eat this right up. Hubby would not, so I do make a lot of these types of dishes for myself. I love love love using the sweet italian sausage from whole foods.
It's now 10am'ish and I'm eating a boring health cookie and my morning coffee, and now starving! LOL thanks Bob

Being of Polish descent, when i see Kielbasa I melt. YUM. I've never tried it with pasta...what was I thinking? Thank you.

Great experiment, it looks delicious. I wish my grocery store carried the frozen mixed bell peppers... would be so much easier!

Dawn: Thanks! This would be awesome with italian sausage.

noble pig: no sweat. :) I have a bunch of kielbasa recipe on here, my girlfriend loves it.

Karen: Thanks. :) My grocery store didn't for a long time, but started recently. I love them.

I love it when experiments turn out good. Looks delicious! One-dish pasta meals are the best, yumminess.

Bob, this looks like something my hubby would love, thanks for a great idea. Patti(T)/BakeSpace

I would have never thought of that triple deglazing but what a great idea to boost flavor!

Reeni: Thanks! One pot deals are my personal favorites. :)

Patti: Thanks! If you make it let me know how you guys like it.

Joie: Heh, thanks. I'm most pleased with how it worked out.