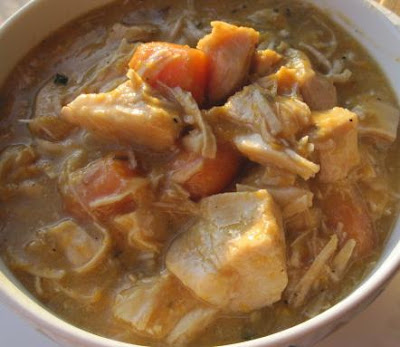 I know what you're thinking. "Stew? In July?" Well, I don't think it's been over 80 degrees here yet this year and the sun didn't come out at all last month. So it's been fall foods for fall weather. Personally, I love it (the weather and the stew). I'm really not into sun or heat, I like cold and cloudy. I want to move to Scandinavia wicked bad, but my girlfriend isn't having any of it. Ah well. Heh.

Anyway, I wasn't sure exactly how I should post this recipe. It is a fail, but the end result was still really good. And while I do think you should try this, I don't recommend going about it the way I did, it's way more work than is needed. But what started it all? Well, I had wanted to make sweet potato dumplings.

First I needed a vehicle for them. Chicken stew seemed appropriate and fitting with the weather. I had some braised chicken that needed using, so it would be a quick stew too. So, bacon fat. 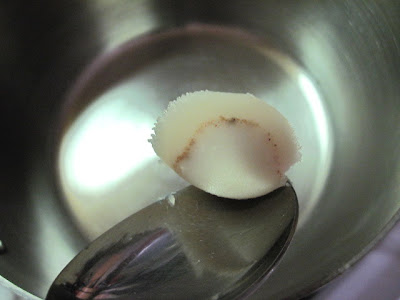 Because I can. Then I browned up some onion, nice and dark. 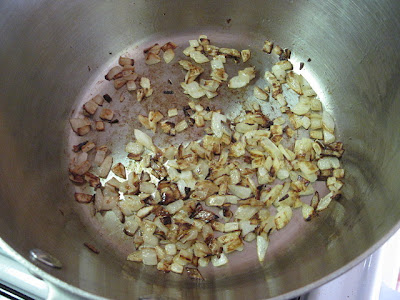 Then, since it's a quick stew and I didn't need to worry about them getting too squishy, I tossed in some carrot chunks. 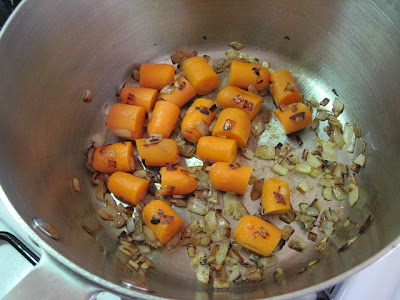 I wanted to get some browning on them too. Then, of course, garlic (but no picture, sorry). Then the cooked chicken. 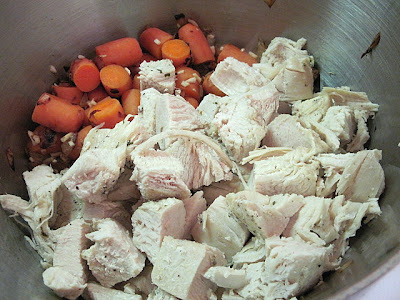 I let them sit for a bit to try to get more browning, then mixed it all up. At this point I added a bunch of flour. 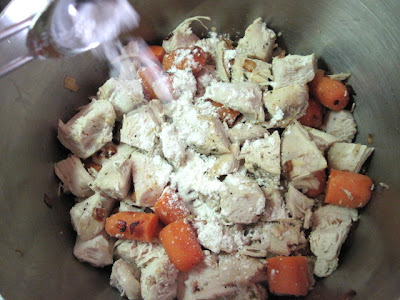 I like adding the flour here better than coating the meat with it because this way the meat browns instead of just the flour. 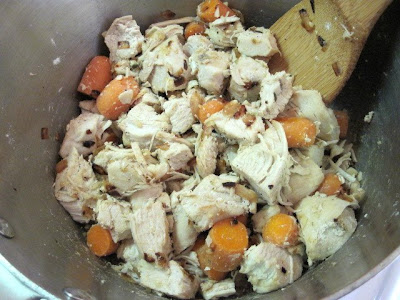 You don't want to just add the broth right now though, that would make it taste like raw flour. You need to let it cook for a minute or so. Then I added the chicken broth and the dry herbs (sage, bay leaf and tarragon). 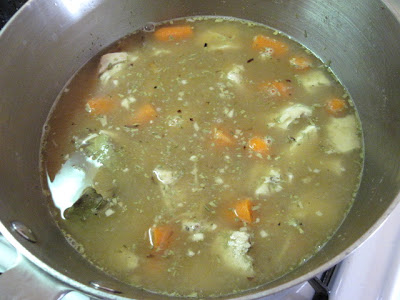 Covered it and let it cook for a while. As that simmered I took a baked sweet potato, cut it in half, 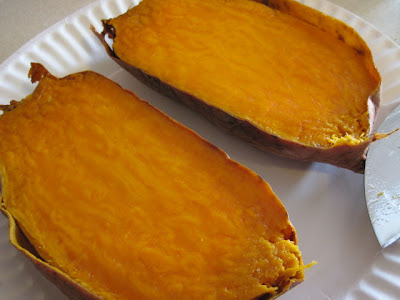 scooped out the goodies and mashed it all up. 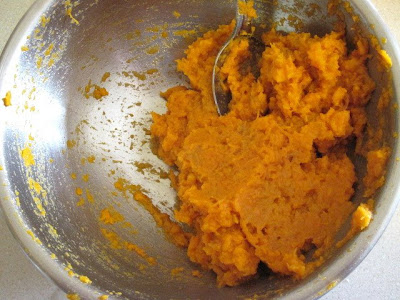 Added an egg and some flour and such 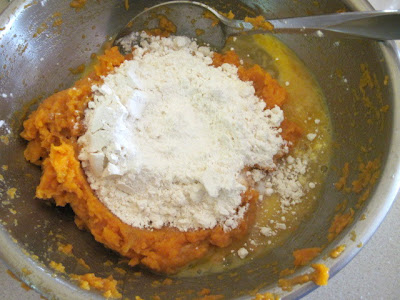 and mixed it up (there was a recipe, but I can't find it right now). Still looked really wet. 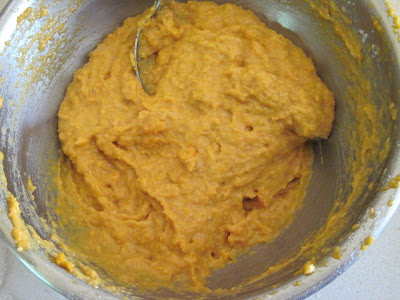 I added a little more flour and then decided to just move along. This was a mistake, I should have used more flour. Oh well, live and learn. Scooped big ol' tablespoons of "dumpling" batter into the stew, 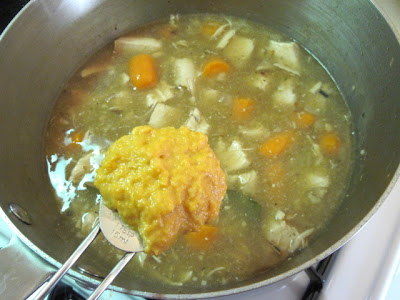 covered it and let it cook for a while. 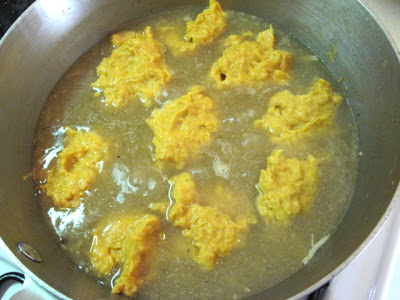 Took off the lid, made a face and covered it to see if the dumplings would set. They didn't. I pulled them out of the pot and racked my brain. 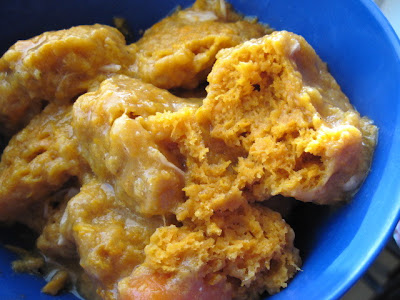 I was left with a bowl full of goop and a watery chicken and carrot stew. Great. Something was going to be wasted. Well, unless... I could put some of the sweet potato goop into the thin stew. 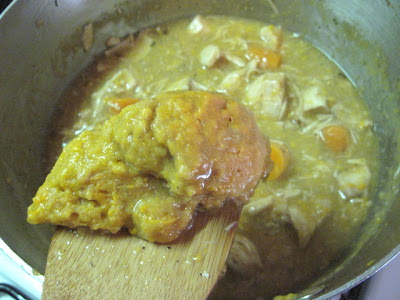 That might thicken it and give it some richness too. Hmmm, yes. Maybe a little basil to brighten it. 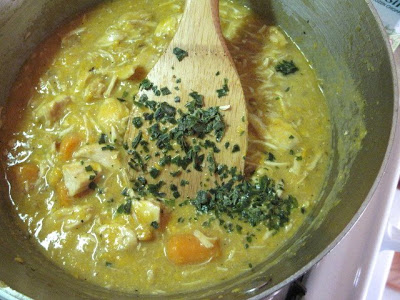 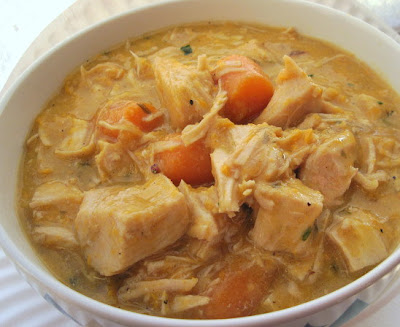 So, win was snatched from the jaws of fail, but next time I'm not going to bother with trying to make the dumplings. I'm just going to add the mashed sweet potato to the stew and call it done. And that's the recipe I'm going to share. Let us never speak of the dumplings again.
Email ThisBlogThis!Share to TwitterShare to FacebookShare to Pinterest
Posted by Bob Labels: chicken, experiment, fail, potato, soup/stew at 7/02/2009 12:00:00 AM

Good for you.. making something delicious out of what was not what you planned. It sounds like a wonderful original stew!

Go you! You were able to salvage it! Many people would have just dumped it but not you! Congrats!

That was such a great save! I have to tell my mom about your flour trick. Our food tastes like raw flour and it kinda grosses me out.

I am the same way about the weather. I'm also not into sun or heat, and like cold and cloudy more. It is something to do with my sensitive eyes! Your failed dumpling stew still sounds good though. It also look delicious!

Awesome...way to turn it around! It looks super comforting :) I'm with ya on the weather...I like majority melancholy days. I keep trying to figure out where on earth there are majority of days in the 55-60 degree range...

Well you know this would be a fav of mine...love the sweet taters in here!

Great save to put the mashed sweet potato in a stew and it sounds excellent!

The sign of a good cook is that he knows how to improvise in order to fix something that went bonkers on him. So, good on you!

Donna: Thanks! It was good and saving it kept me from being wicked angry. ;)

Michele: Thanks! Heh, I couldn't bring myself to let it go.

Steph: Thanks! Yeah, cooking flour is key IMO. It makes stews much better.

Elra: I also have sensitive eyes, which is part of the reason I don't like the sun. Mostly I just don't like being hot though. Heh.

girlichef: Thanks! Seattle. But you also have to have a strong resistance to mildew...

This happens to me all the time... I just go with the flow like you did and it always turns out okie dokie!

So funny. Maybe you can just make regular dumplings next time and then stir in the mashed sweet taters. There's gotta be a way to make it work. Just gotta!

Nice save dude!!! I'm not much of a sweet potato fan, but I'll take your word on it.

I actually really like the idea of adding the actual sweet potato to thicken up the broth. I love sweet potato and am known to eat fall foods year around :D.

The end result sure looks like a winner to me ;)

Final results look awesome! It's mid 90's and muggy here in Florida, but I'd be more then happy to take a piping hot bowl. :)