Sorry, no measurements for this one. 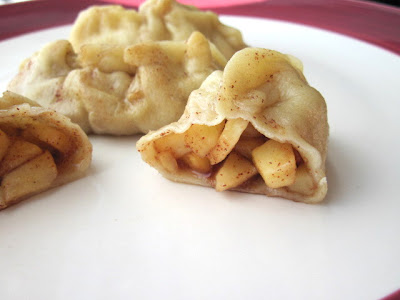 Chop the apple into 1/4" thick cubes, mix with some cinnamon, sugar, nutmeg, ginger and a tiny bit of salt. Let sit for at least 15 minutes, half an hour is better. Sprinkle your work surface with sugar and roll out 3-4" circles (or whatever) of dough. Place tablespoons of apple mixture into the middle of the circle (and some nuts if you're using them), pour some of the macerating liquid on there, fold them up, pinch them closed very firmly and squish them together a bit. Heat up a nonstick pan, preferably with a good cover, over medium-high heat and melt some butter in it. Place the potstickers seam side up into the pan. Let them sit until browned, 3-5 minutes, then add about a tbl of water per potsticker, cover and let steam until the water is absorbed and the dough is cooked. Eat hot.

I know, it's kind of weird. But I was bored and didn't have a lot of stuff on hand. Plus it was wicked good. Next time I do it I'm going to make some changes though. Instead of water for steaming I'm going to use cider or apple juice. And I'm going to make a dipping sauce. I think a juice/maple syrup mix would be good or even a thinned jam. I have an idea for one that I'm going to work on and do a post about later. But it's top secret for now. Heh.

This is a pretty standard potsticker method, at least by what I've found. I had never made them before, though and the whole thing was put together on a whim. I found myself with the dough and I needed something to do with it. My girlfriend was out of town and she doesn't like potstickers, the chewy steamed dough skeeves her out. But this was just for me. I had some frozen meat, but nothing that I could get at quickly and easily. I did have an apple though. So I made these.

First, chopped apple, cinnamon, sugar, salt, nutmeg and ginger. I tossed the ginger in as a nod to the Asian method. 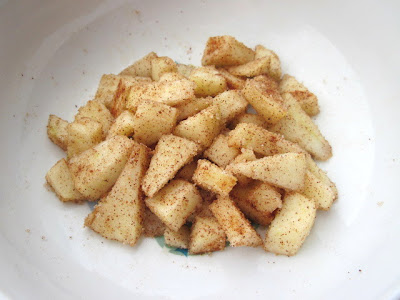 Yeah, I've been watching Ming Tsai, it's no big deal. Heh. I didn't measure anything, but it was about a tsp of cinnamon, a tiny pinch of salt and a pinch of everything else. Then I let it macerate for about a half hour. I rolled out the dough in sugar since it's not sweet on it's own. Then I plunked about a tbl of apple mixture. Some chopped pecans are good too. 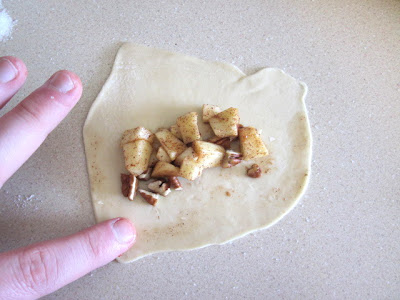 Then I spooned on a bit of the maceration liquid 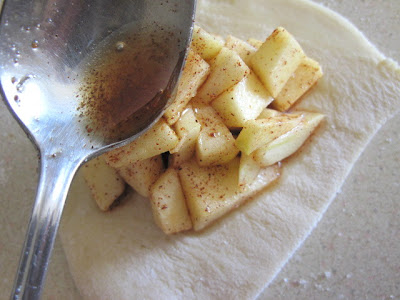 and folded it up. 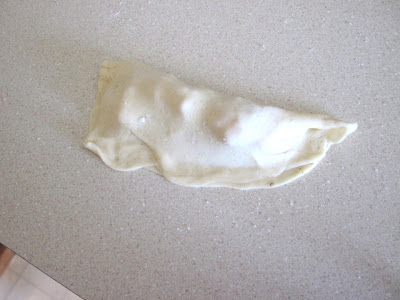 You need to press the ends together quite firmly. 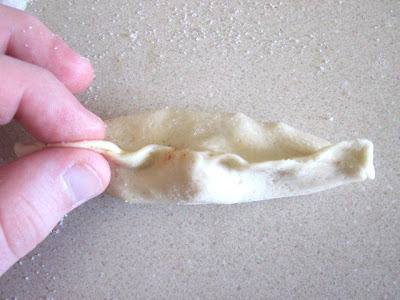 I tried wetting the edge of the dough to help it stay together, but it didn't seem to help. So I just squeezed it hard and it worked fine. Then I kind of squished it together so it could stand seam side up. 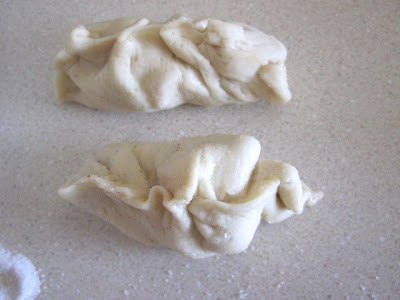 Not as pretty as the ones from a restaurant, but whatever. Now melt some butter in a nonstick pan over medium high heat. 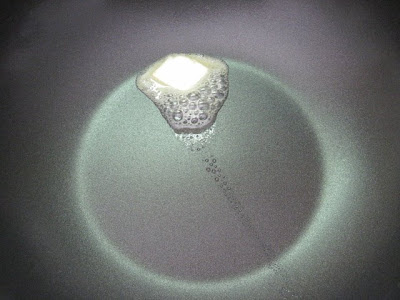 It's just got to be butter for this. Really. You want a pan that has a tight lid, preferably. But I just use tinfoil since I don't have a lid for my nonstick stirfry pan. Once it's hot I placed the potstickers into the pan and let them brown. 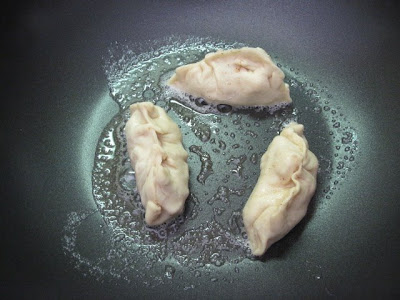 This took about 5 minutes. Careful when you're checking them, they're slippery. 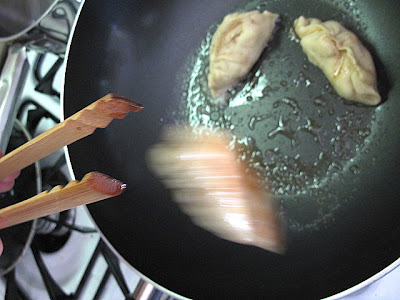 Once they're browned add some liquid. 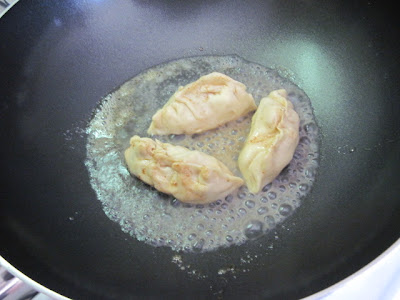 I used water, but like I said next time I'm going to use juice. Or maybe wine... Anyway, I think I used about three tablespoons of water, but I'm not really sure. I'm going to make potstickers again and get more precise directions. Then I covered them till they had absorbed the water and were fully cooked. 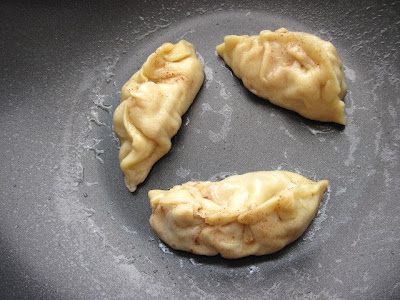 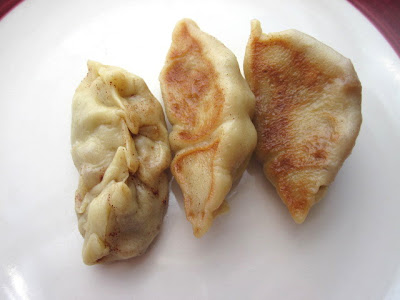 They were wicked good, definitely something I'm going to work on since I think they can be even better. 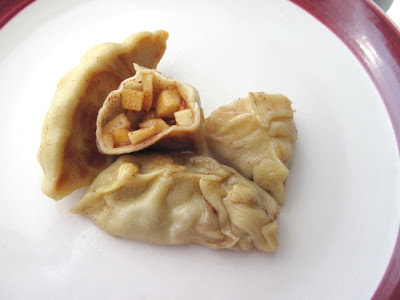 Email ThisBlogThis!Share to TwitterShare to FacebookShare to Pinterest
Posted by Bob Labels: asian-esque, dessert, experiment, fruit, steam at 7/14/2009 12:00:00 AM

How yummy are those? What a great and creative idea for potstickers. I bet they'd be great with a scoop of ice cream :)
Can't wait to see what you have up your sleeve next!

These look so good and I have extra homemade wonton wrappers in the freezer. I'll have my husband bring home some apples tomorrow.

Um, hello! Send them my way please!! I love anything with cooked apples and I will make these! You rock!!

Love this unique idea. Ice cream would be heavenly with these. Great thought!

just a thought, I wonder if one would like to 'cheat' with this recipe, how premade apple pie filling, choopped up woudl work?

These look great! Such a creative idea!!! The possibilities for fillings and sauces are endless - thanks for this great recipe!

I like the addition of the fresh ginger. I've never tried sweet dumplings before, it looks good!

I love the dessert potstickers! Great Idea! This would be an awesome way to use some apples when I go picking in the fall!

These look awesome!! I bet it would be great with a maple or caramel sauce...oh man, I totally want some....love that picture showing the undersides all nicely browned...mmmmm.

Kristen: Thanks! Yeah, a little ice cream would have been good. Heh.

Michelle: Nice, let me know how they turn out!

ChefBliss: You let me know how they turn out too! :D

Donna: Thanks! I think premade filling would work just fine.

Meghan: Heh, no sweat. Thanks for stopping by. :)

Steph: I had never had them either, it just kind of came to me. Thanks!

Michele: Thanks! These would have been even better with fresh picked apple. Maybe some berries...

girlichef: Or maybe a maple AND caramel sauce! :D

Weird? Uh, no way, man! This is totally awesome and creative!

These sound great. You're very creative in the kitchen--I'm impressed!

Experiments are the best! How 'bout a bit of melty vanilla ice cream?

I never would've thought of a dessert version of potstickers. I wonder how a blob of brie cheese would taste inside there. and ya, with that maple carmel sauce heather suggested. Killer stuff there!!!

These look so yummy! I'm almost tempted to go make some with my wonton wrappers!

WOw, that's interesting, not the usual potstickers I'm used to. Looks and sounds great though!

All we need is a bit of ice cream. Another good one. This tops the tuna!

I love the combination of apples, cinnamon and nutmeg! Great recipe!

This is so totally NOT weird. It looks delicious... and it gives me an idea for what to do with all those wrappers I've got on hand!

They look pretty perfect now! What would you tweak?
these delicious sweet dumplings would be such a sensational, light dessert. Will try them for sure!!!
i'm new to your blog. I read your profile. I don't like that you get a cold neck in the winter. I would knit you a scarf :)
Sorry, that may be a little creepy, I just like knitting for people, even if they're complete strangers!

Wandering Coyote: Thanks! Heh, being creative and weird often go hand in hand. :)

unconfidential cook: Yeah, that would have been good. Or maybe work in some struessel...

Danielle: Ooooo, that would be good too.

Duo: Thanks! Some ice cream would have been good.

Lo: Thanks! Can't wait to see what you do.

I don't think it's creepy, I have a similar reaction with feeding people. ;) I've been trying to get my girlfriend to take up knitting so she can knit me a scarf for years! Heh.

What a little sweet tooth satisfier this would be! I would love it with a side of vanilla ice cream!

Wicked good is right! I love potstickers and sweet version sounds wonderful! Can't wait to try it out!