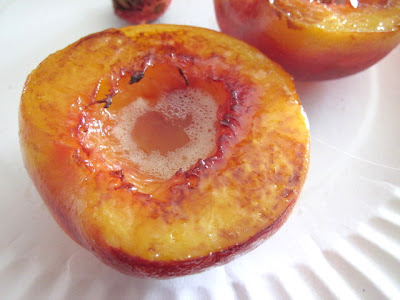 I don't have a recipe for this one either, sorry. This is the first incarnation of what will probably be many. I did it on a whim and while it was good, it wasn't... complete. Next time (probably tomorrow) I will use brown sugar instead of white and maybe some cinnamon. I'm also tempted to add a pinch of salt, to both heighten the flavor and pull out some of the juices. I have this vision of peach juice, melted brown sugar and browned butter turning into a faux caramel mixture kind of thing. I don't know if that's actually going to happen, but I'm going to try. For those of you who are keeping score at home, here is what I did.

First, I got my butter going (I used about a half tablespoon). 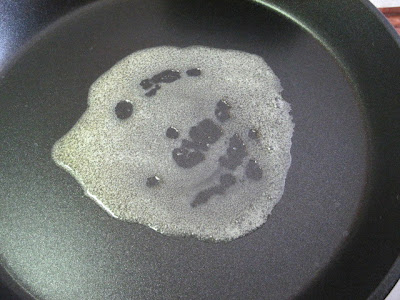 I figured it should be just starting to brown when I put the peaches on, otherwise it runs the risk of burning. That took just a couple minutes. Then I cut a peach in half. 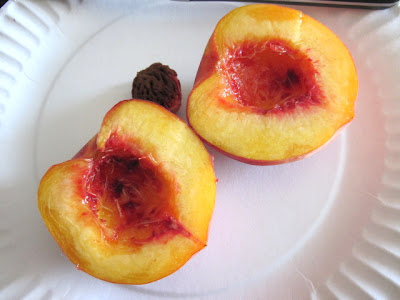 I figure one peach is a portion (fruit is good and all), but you could do half per person and still have it be fine. I sprinkled them with some sugar 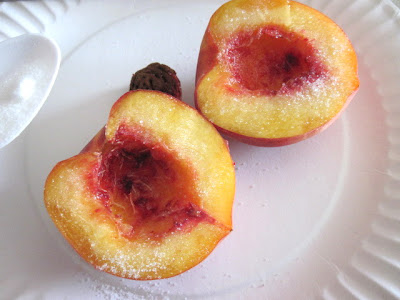 and plopped them onto the pan. 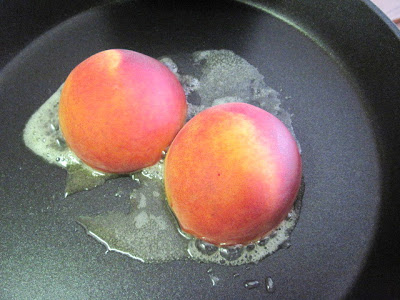 I used nonstick heated to medium/medium high for this. Once they had browned up I plopped some in a bowl, poured the browned butter in the convenient hollow where the pit had been and thought "This could use some ice cream". So I put some ice cream on there. 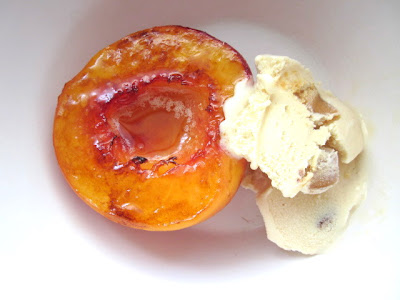 It was Hagen Daaz caramelized pear and pecan. It went really well with it. I think making a reduction with the browned butter, whatever juices the peach puts out, any leftover sugar and a sweet wine would be good. More experiments are clearly needed.


Email ThisBlogThis!Share to TwitterShare to FacebookShare to Pinterest
Posted by Bob Labels: dessert, experiment, fruit at 7/29/2009 12:00:00 AM

Yes, more experimentation is needed. At my house, please. I even have a peach tree.

this is so funny b/c I did this yesterday...brown sugar works better. i also put honey. i didn't do butter though..and I did ice cream yum!

I think you hit it pretty close to the mark there Bob... You can;t go wrong with Browned Butter. I would not say "No" if you passed that bowl my way. Hint Hint Hint...

Amazing picture too, I can actually TASTE the peach through my screen... Decadent!!

Love the browned sugar, peach juice, caramel idea... I look forward to the next incarnation. :)

Yum. I love grilling peaches too so tis is just awesome Bob!

Bob. Looks so delicious as it is, I cant wait to see what you do with them next.YUM!

I love your experiments! Can't wait to see the next one. This looks good enough for me though! lol

I'm off to my kitchen to make this. Excellent, delicious, yummy

Caramelized peaches with ice cream sound wonderful - I bet it will be insanely good with brown butter too!

Nice and simple - sometimes it's best.

Vicki: Sounds good to me, we've had a hard time getting good peaches around here lately. :)

Sarah Alaoui: Ooo, honey. I bet that's good. Thanks for the tip!

Culinary Alchemist: Hey, you're the one working on the food fax! Finish it up and I'll pass all kinds of stuff down. ;)

Jennifer: Thanks! I've never had stone fruit, I'll have to put those on the to-try list.

Dajana: Really? Let me know how it goes for you! :)

How yummy! I like the whole sound of the caramel. And with ice cream - heavenly.

looks really good! can't wait to see how it evolves. If you can find a bottle of that orange muscato thats our wine of the month in Bakespace, you might want to add a bit of it. its light, fruity and not as sweet as a riesling.

Yummy. My grandmother used to make this for us when I was young. She used to put toasted walnut pieces or pecans or whatever she had around on it. Thank you for the lovely memory.

Reeni: Thanks! Yeah, the ice cream pushes it over the top.

Danielle: I had actually wanted to do that but none of the stores around me have any muscat. At all. It's been frustrating.

Trevor: Hm, I think I still have some pecans around here, that would be wicked good. Always happy to remind people of things they like. :)

Totally brown sugar and cinnamon. We love ginger on our peaches too. Mmmmm. You really can't mess up a peach!

You had me at pan...kidding, you had me at brown butter...I'm bonkers over anything that includes that nutty deliciousness. Peaches sound amazing like this. And DEFINITELY w/ ice cream!

Tonight I'm going to marinade it in POM, lemon juice, ginger, maybe a couple other things, then BBQ it!

I love searing food, but mostly for the sounds..haha. I like the sound of brown sugar. I think brown sugar makes everything taste better! I love it so much, it's probably why I can't eat a cookie that's not made with brown sugar.

That sounds bafflingly amazing o.O I'll have to grab some peaches from the farmer's market next time. And make sure I've got some raw sugar on hand.

Brisket was a success! I'll post about it sometime tomorrow!

Mmmm, I love fruit cooked like this! I think I could lick the screen it looks so good!