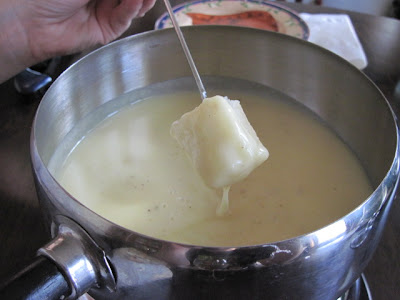 Place the shredded cheese and cornstarch in a large bowl. Toss to coat. Set aside.Rub the inside of a 4-quart pot with the garlic, then discard. Over medium heat, add the wine and lemon juice and bring to a gentle simmer. Gradually stir the cheese into the wine. Stir constantly in a zig-zag pattern to prevent the cheese from seizing and balling up. Cook until the cheese is just melted and creamy. Do not let boil. Once smooth, stir in kirsch and nutmeg.Transfer the cheese to a fondue serving pot, set over a flame to keep warm. Other cheese options: I like Gruyere at all times, but Jarlsberg or Ementaller instead of Fontina are great.Serves 4.

This one comes from my brother, he made it a while ago when we were over his apartment. I had never had cheese fondue made in a classic style before, with wine and kirsch, since my parents are teetotalers. When they made it it was just melted cheese. Nothing wrong with that, but it wasn't the same as this. This was unreal. Let's just get right to it shall we? 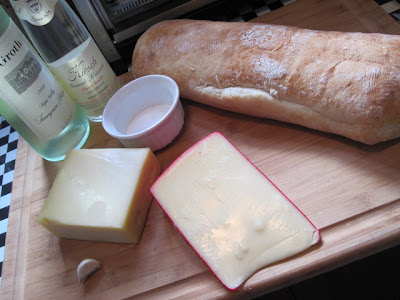 We've got some Gruyere, Fontina, kirsch, white wine, salt and of course good crusty bread. In keeping with my theme of never getting pictures of everything, not pictured are lemon juice and corn starch. The bread should be cubed, but you should make sure to have some crust on each piece. 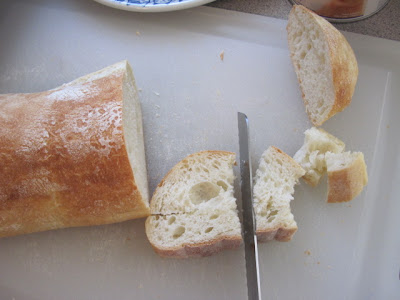 Crust is key, without it the chunks won't stay on the fork. Now, we'll want some shredded cheese. 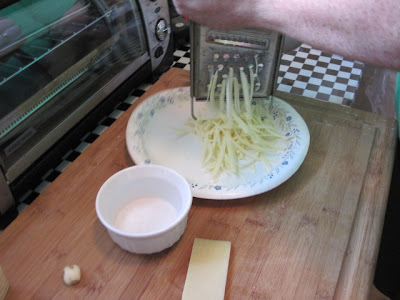 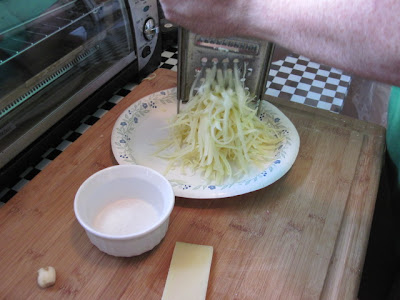 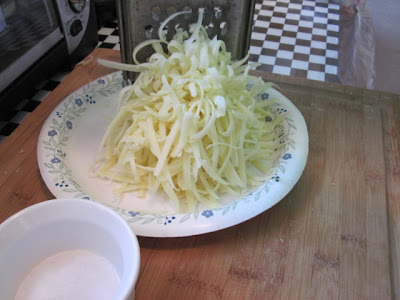 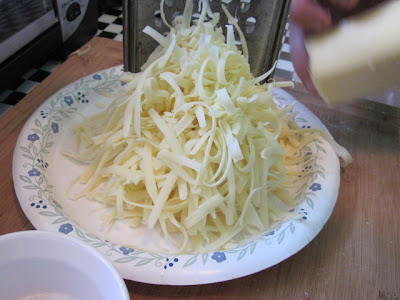 That's half the cheese we need. Excited yet? Heh. Now it's tossed with the cornstarch 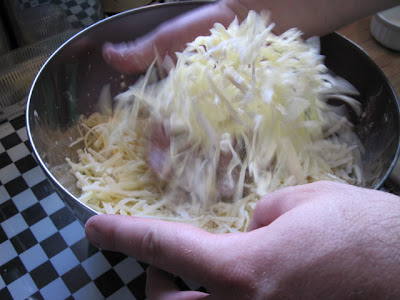 (it helps keep it smooth) and set it aside. Rub down a sauce pot with some garlic 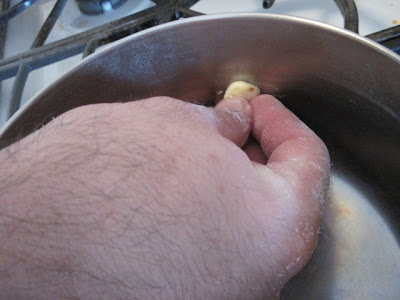 (I think my brother referred to this as "blessing"). Now pour in the wine and lemon juice and heat it up to a gentle simmer. 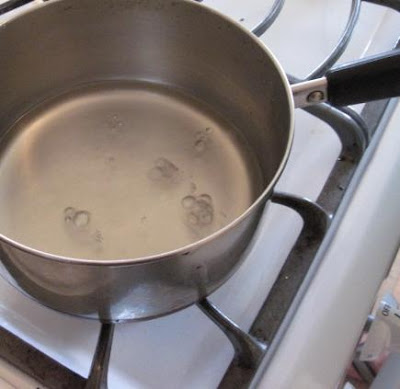 The wine was Groth Sauvignon Blanc 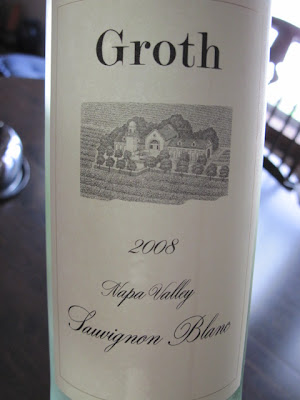 and while I don't have my usual dealie about it I do highly recommend it, it was really good. Oh and note, nothing should ever, ever boil in this recipe. That will break the cheese and you really don't want that, it will ruin the texture. Add the cheese, a bit at a time to the wine, 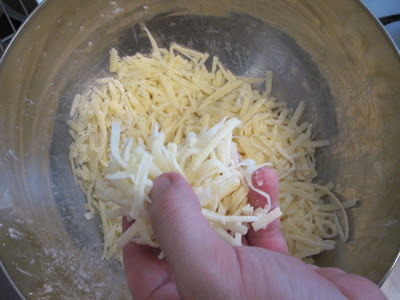 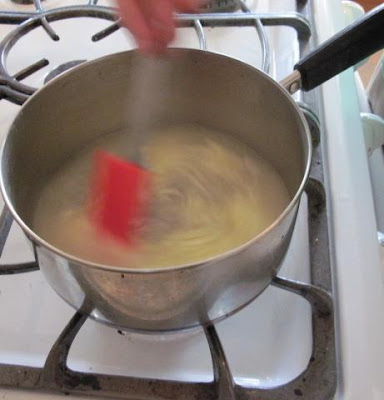 Once all the cheese is in and it's nice and smooth add the kirsch and nutmeg. 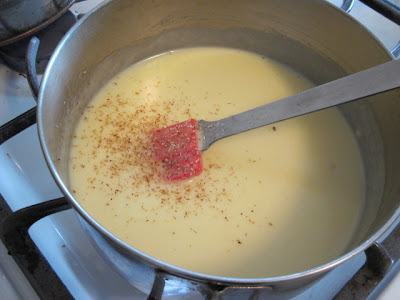 This was my first time trying kirsch and I noticed an odd thing about it. It's brandy, right? Made from cherries? But it tastes like tequila. It was good, don't get me wrong, I just found that weird. Anyway, the fondue is done, transfer it to a fondue pot 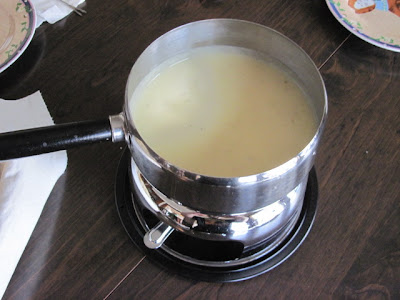 and have at it. 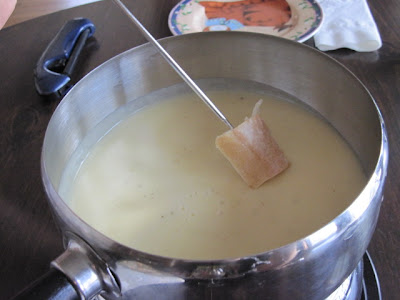 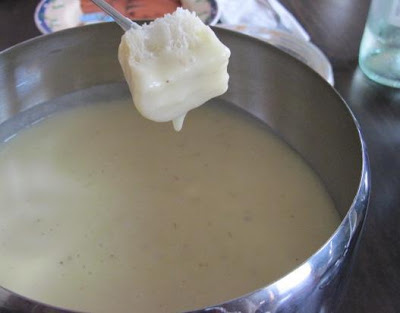 but I was thinking this would be good with vegetables too. Broccoli, pepper chunks, whatever you think would go well with a pound of melted cheese. Hell, chunks of roast beef or ham would be awesome too. Now I've mentioned my girlfriend doesn't really eat cheese, so she had some turkey balls that I didn't get a picture of. But what was also wicked good was dipping the bread in the fondue and then into the tomato sauce from the meatballs. Good times kids.

Email ThisBlogThis!Share to TwitterShare to FacebookShare to Pinterest
Posted by Bob Labels: bread, cheese, dip at 7/23/2009 12:03:00 AM

Cherry brandy you say? That's interesting! We've only been to one fondue party, and somehow the cheese course got all messed up. Ironic, huh? We'll have to try this.

I love fondue.. this looks real good and creamy. (I think a chunk of meat would be *great* dipped in that, too!)

But do you honestly need an excuse to eat a pound of cheese? :P Looks fantastic, I saw your photo on foodgawker.

One of my wedding gifts was actually the fondue pot or whatever it's called. I think we've used it once or twice in 7 years. And never to make cheese fondue.
I can imagine how good this was.

Oh yeah!!! This beats the hell out of sitting for 3 hours at the Melting Pot.

I love fondue, and this looks dangerously good. I can eat limitless amounts of cheese :)

This looks really awesome! I always wanted a fondue pot! You just drove that point home.

nice step by step....I love cheese and I have never had good fondue - thanks

I LOVE the cherry brandy in this!! This fondue looks amazing to me and my hat is off to you!

This looks heavenly! Also for the record, people who don't like cheese are communists.

Oh very nice. There is just nothing better than fondue and bread and apples!

Duo: Yes I do! Great stuff too. That sucks, the cheese one is the best. After the chocolate one of course.

Karen: The texture came out great even though I made my brother stop doing stuff so I could get pics a couple times. Heh.

Candy: Well, you need some kind of excuse. It needed to be eaten, it was there, it kept making fun of me... thanks for stopping by. :)

Dajana: Don't imagine, make some yourself! It's wicked good.

jillian: Thanks, me too!

Reeni: Heh, I want one too. No room for such a specialized thingie though.

doggybloggy: this was a really good one, try it out and you won't be disappointed.

Donna: Thanks! I'll pass your hat on to my brother, the guy who made it. ;)

Tallieann: Hey, she's not a communist! We just need to keep an eye on her... :D

noble pig: Oooo, apples would have been great with it.

Dude! You are totally speaking my language... I am going to have to try it with the Fontina... I usually use Emmental & Gruyere... AWESOME!!!

What a nice blog you have. That cheese Fondue looks so yummy.

Im a fondue virgin. As much as I like cheese I never saw a reason to melt and dip...Id just pile over desired food and melt but your classic style is very appealing!! nice job dude!

That was ridiculously good. Hands down it was the best cheese fondue I have ever made. There was about a cup left, so two days later I baked a couple of potatoes, steamed some broccoli and warmed the rest of the fondue to go over it.

CA: the Emmental where I was shopping was sketchy and overpriced, so I went out on a very short limb. It went well :) It was a Danish fontina, so it was less pungent than an Italian one, and it complimented the Gruyere very nicely.

Oh, and it all fairness, whereas the 'rents did skip all the alcohol bearing products (and more the fools they are for it), they did still included the garlic and lemon juice. I think they may have substituted some water for the wine, but the lemon is critical since the acidity in it cuts the long protein strands into bits useful for dipping. Plain melted cheese would not work -- imagine dipping bread into melted mozzarella...not an easy thing.

The Swede in me loves some good fondue!

My husband and I often enjoy a wine-and-cheese dinner but I never thought about doing it this way! For some reason, I was fixated on the idea that it required a fondue pot to make. 8-P Now I know better and have a recipe to follow!

Tangled Noodle: The fondue pot is strictly for serving and is really optional. You can fake it with any basic camp burner: Punch holes in the top and bottom of a soup can and place it over a small can of Sterno, for instance. Even a couple of tea lights can keep it sufficiently warm. Note that there is a crust which forms on the bottom if the heat is just barely too high which is absolutely delicious.

The wife and I are partial to wine-and-cheese for dinner too. We usually pad it out with olives and thick-sliced deli turkey as well, in memory of a diner we had at Big Sur with lovely local wine, the heels of a little deli's turkey breast and fresh bread under the redwoods. It was very nice :)

I've never had cheese fondue before, it looks yummy!

I'm never a sweet tooth person, so a cheese fondue definitely appeals to me more than chocolate fondue. Looks so indulgent!

Oh, me likey!! Who cares if it's so 70's...I totally want to have a fondue party!! That bread w/ the deliciousness all over it makes me want to grab it!

Amazing cheese fondue recipe! nice detail!
Wonder if I could put your recipe in my web
www.ilovefondue.co.uk

GK Chesterton: “The poets have been mysteriously silent on the subject of cheese.”

Voila: www.tastingtoeternity.com. This book is a poetic view of 30 of the best loved French cheeses with an additional two odes to cheese. Recipes, wine pairing, three short stories and an educational section complete the book.

From a hectic life in New York City to the peace and glories of the French countryside lead me to be the co-founder of www.fromages.com. Ten years later with the words of Pierre Androuet hammering on my brain:

“Cheese is the soul of the soil. It is the purest and most romantic link between humans and the earth.”

I took pen and paper; many reams later with the midnight oil burning Tasting to Eternity was born and self published.

I believe cheese and wine lovers should be told about this publication.