It's kind of funny, when I wrote the apple potsticker post almost everyone said they wanted vanilla ice cream with them. Now, I had mentioned that I had a dipping sauce in mind to make. My goal for that was a thick, warm dip that tasted like vanilla ice cream. 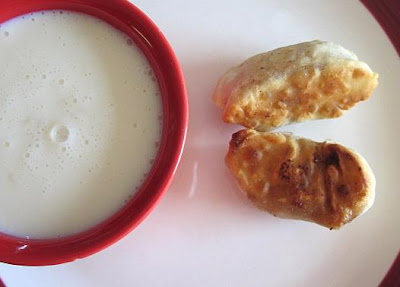 What I got was something that tasted like vanilla pudding. I didn't get any pics either, except a couple final product shots. But what I did was take about a cup and a half of whole milk and bring it almost to a simmer. Then I added some sugar and vanilla and let it reduce till it was about a half cup. Then it wasn't quite thick enough so I added some cornstarch slurry made with milk. It was good, but not quite what I was going for. The texture was fine, it clung to the dumplings just like you would want. 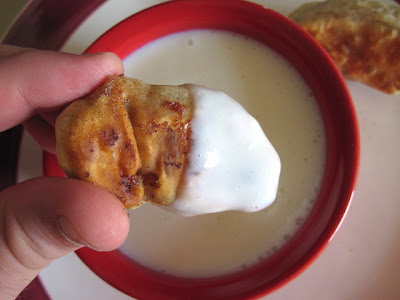 And the flavor was good, it just didn't taste like vanilla ice cream.

This time I also baked the potstickers, just to see what would happen. I browned them on the one side like regular potstickers, then I brushed them with a little butter and tossed them in a 400 degree oven till they were crispy on the outside. They were really good (and not too high in fat), but I think not really potstickers anymore due to the drastic cooking change. I'm going to work on the idea though and get a post up about it in the future. More experiments are clearly needed.

So how about some advice, kids. How can I get my dipping sauce to taste like vanila ice cream? I suppose I could just melt some ice cream, but it doesn't taste quite right melted. Plus that's pretty boring. Heh.
Email ThisBlogThis!Share to TwitterShare to FacebookShare to Pinterest
Posted by Bob Labels: dessert, fruit, sauce at 7/15/2009 11:38:00 PM

Love the pudding too in any case :)

I would make ice cream, but not freeze it--you know, make the custard of an egg-based ice cream. But what it really calls for is good old vanilla sauce, like you'd put on apple streudel. Yum. Now I REALLY need to make these. Fun cooking with kids activity.

A vanilla custard (with a bit of cinnamon) would be good with these.

You are like this temptress with all your goodies...now a dipping sauce...OMG.

Hmmm...good question. Undoubtedly, you need to use CREAM, not milk. That would be a good start. Maybe an egg yolk for thickener...Hmmm...Have you thought about making Creme Anglaise? Often that is used as a base for vanilla ice cream. Might be a good place to start.

My recco (see the tip of the week on my site now) is to actually serve melty ice cream as a sauce.

Navita and unconfidential cook: I could and I bet it would be good. But I had wanted to actually make a sauce you see. :)

Deb: I wanted to do something like that, but I was only making about a cup of dip. I'd have to separate an egg and then take like a tsp of yolk out. Not happening. Heh.

Karen: Yes. Yes it would.

noble pig: Thanks! But don't you mean temp... tor? Something like that. ;)

Wandering Coyote: Heh, that would certainly help. Creme Anglaise, now that I think is what I'm going to do next. Good call, thanks!

Sounds really good. Vanilla is always a hit in my family.

I think you'll have to add an egg or egg yolk to make it taste more icecream like. You might not have to use cream because that might thicken it too much and turn into a pudding.

This is a great idea! Vanilla ice cream is just a churned custard! You can just make a custard and not churn it! Yummmmmmmm!

Nice! You are loving those potstickers to death.

This still looks really good! I was thinking of an egg whipped in, too - I see others had the same idea. When I made whoopie pie filling the eggs in it made it taste like ice cream.

You are so the inventor!! The custard idea does sound great too, though...

What a nice and unique dip for the potstickers. Mmmm how about adding some melted vanilla ice cream? :P

Your dipping sauce has taken your apple potstickers to a whole 'nother level of goodness! Melted ice cream, vanilla pudding . . . I'll take any or all of it!

I could only imagine how good this tasted all together!!! YUM
Thanks for your comment on my TV segment

I have been thinking about this since we talked, and I still say it needs egg. You liked the vanilla bean ice cream I made, right? Just scale the ratio of egg to cream down some. Try something like this: just simmer 1 cup half and half with a vanilla bean, steep, scrape and remove vanilla bean, whisk an egg yolk into 1/8 to 1/4 cup sugar and temper into the cream, then warm gently. It might need more thickening, but you can add corn starch to get the texture you want at the end.

Yeah, I have to agree with Dynamite Debbie... Your going to probably have to make an Ice Cream custard or a Creme Anglaise to get that vanilla Ice Cream flavor...

This may not give you vanilla ice cream flavor, but maybe some malt might make a nice addition to the flavor. How much vanilla did you add? Maybe try a bit more, or a fresh vanilla bean? Whatever you do, it still looks scrumptious!

Wowowow I love this and I want some!

What about a foam type sauce, along the lines of a sabayon? get 3 or 4 egg yolks, whisk them to soft peaks with sugar over a double boiler (or metal bowl held over boiling water), then whisk in a small amount of milk/cream scalded with your vanilla bean scrapings? you could even leave the bean in for the scalding and remove it before pouring in the milk. This would be replacing the madiera in the sabayon recipe so you wouldn't need much. Maybe steal some from your creme anglaise base for a double experiment?