Ok, so it's not really wrapped in bacon. 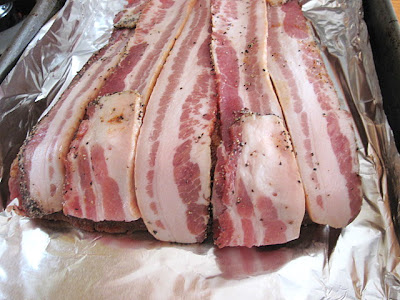 But "bacon topped" doesn't have the same ring to it and the concept is the same. I'm not posting a recipe for this because I'm still working on the rub and I didn't get very many good pictures. I need to sit down and reevaluate my approach to photography, starting with getting myself Photoshop. Anyway, I when I saw this post over at Girlichef I remembered I had a brisket in the freezer. And since hers looked so good I had to make it. All I did was rub it with a rub and cover it with bacon. 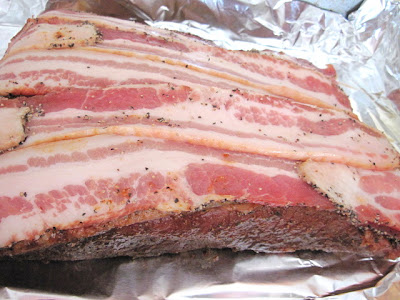 You could use whatever rub you want, the one at Girlichef looks great, this one from my barbecue pulled beef would also be good. Then I covered it and tossed it into a 300 degree oven for a couple hours. After the first hour or so I uncovered it so the bacon would crisp. This is pretty much what it looked like when it was done. 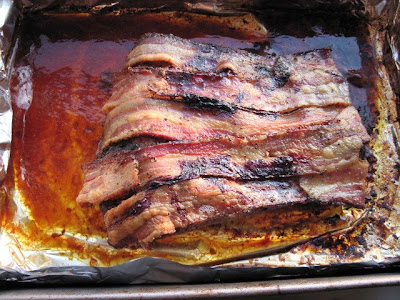 It actually came out a bit dry, I think because I uncovered it. Or maybe I just didn't cook it long enough. But there were plenty of juices, so I just poured them over it and it all worked out fine. I made it into sandwiches. 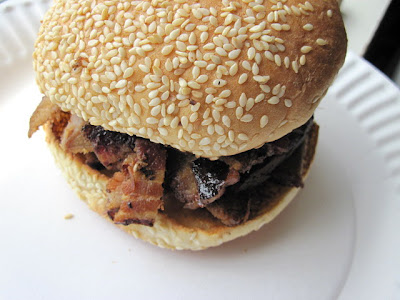 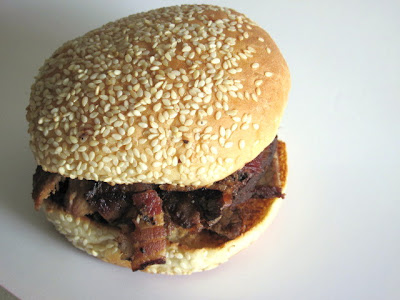 I should try wrapping bacon around somthing...have never done it on anything at all.
Your sammie looks great. Let me just take a wild guess here, but I think you're a sandwich guy ;). you make the bestest sandwiches ever!!

I gotta get me some fricken brisket, man. Seriously.

anything wrapped in bacon is gold

Great idea to wrap the brisket in bacon - the sandwiches look awesome!

You had me at Bacon. Then Wrapped. Then Brisket. OMG!

Wrapped in bacon this must have an unbelievable taste!!! And on a sandwich with all those yummy juices poured over, MMMMM!

Man after my own heart.

Wait, did someone already use that line? Anyhow, looks awesome. I want it now and it's 9:30 am.

Could that be easier? Passover, here I come....

Culinary Alchemist: Heh, thanks. They were mad good. I've still got some left that I'm going to do something with too.

Danielle: Yes. Yes, you should wrap something in bacon. I suggest everything. Thanks! You know, I do enjoy sandwiches. ;)

Wandering Coyote: It's one of natures perfect foods.

Donna: It did, thanks!

unconfidential cook: That's one of the best things about it, the ease.

I love the bacon on here!!! The sandwich looks yummy!

I love anything with bacon - it perks things up all the time. look forward to the recipe :)

Even though it's 7am, I could totally chow down into that burger right now!! Dang, I really wish I could buy brisket!

Holy cow...that is one heckuva sammie you made from that brisket! I love the look of the bacon all mixed in naturally. I AM trying it with bacon next time...I mean, could you really go wrong w/ bacon? I think not! Thanks for the shout-out :)

Bacon and brisket. Two of mans greatest discoveries with fire of course being the third. Putting these two delicious meats together is a wonderful idea and I will be adding bacon to my next smoked brisket. Thanks for the inspiration
http://www.bbqaa.blogspot.com

Looks and sounds amazing. Everything is just better with some bacon!

My friend is from Texas and a real bbq snob. I showed this post to him.

Yeah...yesterday he had a bacon covered brisket in his smoker. :)

This looks absolutely amazing! I wish I could find some Dallas bbq like that. Unfortunately, the barbeque near me is either subpar or always has a long wait. Not that I mind waiting, but perhaps I should work toward learning how to cook like my own bbq restaurant near me using techniques you have!