I'm pretty sure I've mentioned that I inherited my love of food from my parents. My dad would cook sometimes (particularly breakfast on Saturdays) and my mom made at least one meal for the family a day. They lived in Boston for decades but moved out into the middle of nowhere in the high desert some years ago. They have a hard time getting a lot of the things they could get in Boston out there, of course. My mom says she can get any Mexican spice she wants, but nothing Asian for example. So when they come to visit there's a lot of stuff they want to eat. They've been visiting for the past few weeks and as usual all kinds of stuff has been made. They always stay at my brothers (since he has someplace for them to sleep), so I wasn't there for everything. But we did do some cooking together, like this, on Fathers Day. Although admittedly I didn't do much of the work, I mostly got in the way and took pictures. Heh.

One thing my parents said they can't get easily is Middle Eastern and Mediterranean stuff, hence the theme. They picked up some lahmajun (think a thin pizza with no cheese), 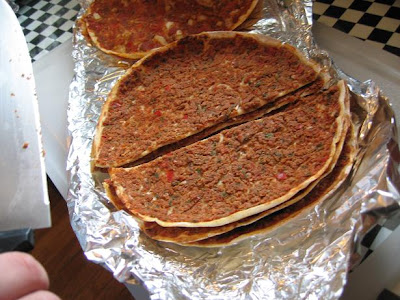 stuffed grape leaves (not sure what they are stuffed with, I don't care for them myself), 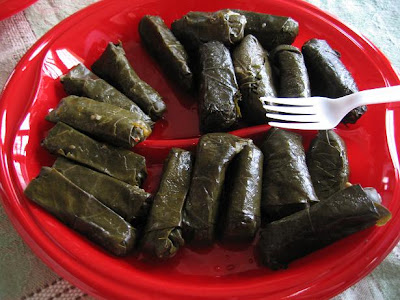 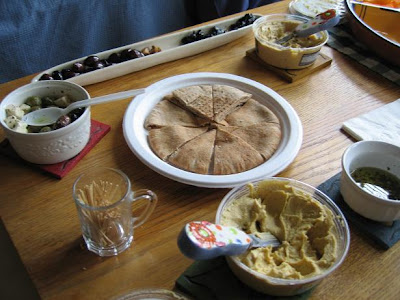 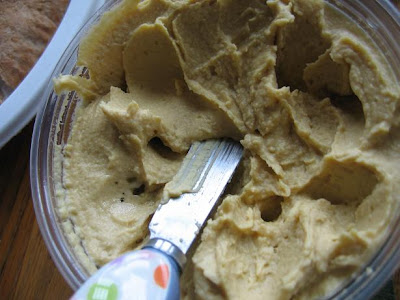 Doesn't matter, there were two kinds, both good. My sister in law made some spanakopita (Greek spinach pie) 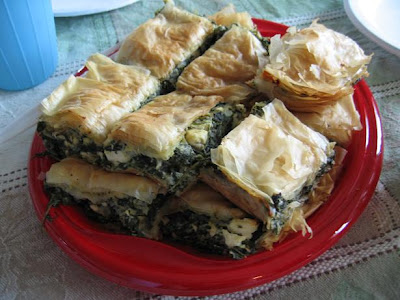 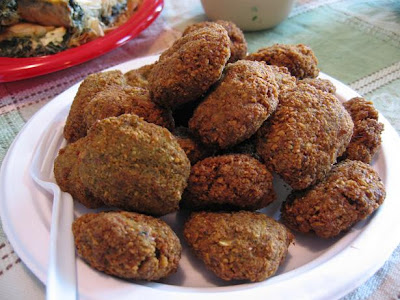 She makes the best falafel, I need to get her recipe. My brother made some tzatziki 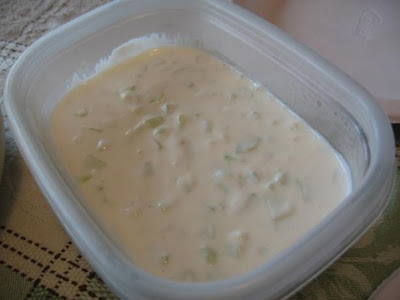 and some chicken souvlaki. The souvlaki was wicked good, but he doesn't really measure the marinade which makes it hard to get a recipe. He just tosses together some lemon juice, olive oil, garlic, oregano, black pepper... 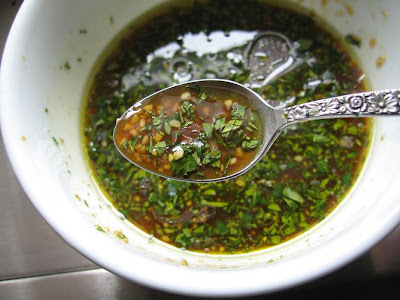 I think that's it. Marinates the chicken chunks for half an hour or so, then grills it. 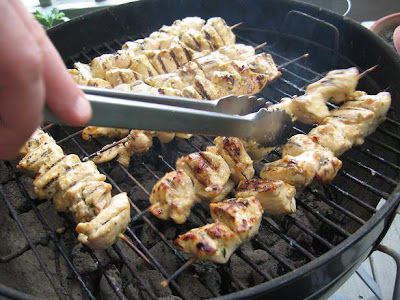 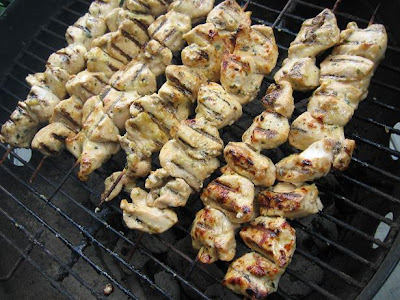 We also had a red blend, 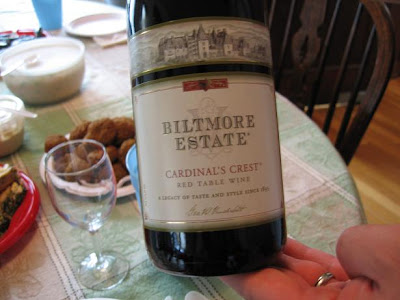 Cardinal's Crest, from Biltmore Estate that went well with it all. And finished it off with some homemade baklava. 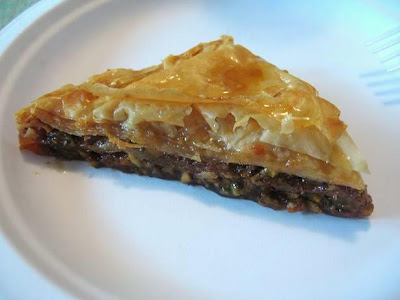 Which I also didn't get the recipe for. My brother makes it, it's also wicked good. He puts orange juice in it, which is awesome. There was also tabbouleh, but I didn't get a shot of by itself. It's here in the table shot though. 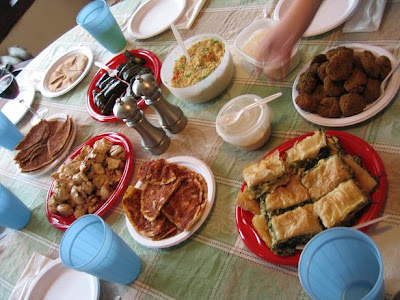 We don't often bother with fancy china and stuff, we're simple folk. Heh. It was a great meal for a hot day (not that it was that hot here), most of the stuff was great at room temperature or cooler and there were lots of light but assertive flavors. Good times.

Hey! Your table looks absolutely gorgeous, pretty much all my favourite foods are there.

Stuffed vine leaves are stuffed usually with rice or rice and mince meat (beef). It's a pretty common greek/middle eastern meze - and trully one of my favourites!

I do understand your pain about people not measuring when cooking - makes it so hard to replicate recipes!

What a delicious feast. Slapping you on the hand for not getting the recipes.. It all sounds and looks so very appealing!!

What a spread!! I wish I was sitting at that table. It would make a perfect breakfast right about now...starving...must go eat before perusing any more blogs!! :)

So funny, I'm going to attempt hummus, tzatziki, etc. tonight, inspired by a post on Pinch My Salt last week. There's something Middle Eastern in the air... And this looks like a fabulous Fathers Day.

What a feast! Would love to try everything!

Kiki: Thanks! Yeah, it would be nice if everyone would measure, especially when it comes out so good. Heh.

Donna: Thanks! Well, except for the slap. ;)

girlichef: I know, I could go for some falafel for breakfast right now.

Yesica: Weird how these things happen, isn't it?

That is my kind of meal! Everything looks so good. I don't care for the stuffed grape leaves, either, though.

I'd love to sit at that table! Everything looks out of this world delicious!!

Now that is my kind of food! It looks like a delicious feast! I love stuffed grape leaves, but prefer the ones I make at home to the ones you can buy already stuffed. So maybe you just need to make some! LOL!

Can't say no to baklava, hummus or falafel. Just can't!

That was some good stuff. The souvlaki marinade is pretty simple (and flexible): about equal parts of lemon juice and olive oil, a whole bunch of garlic and oregano, and some soy sauce (which I assume is replacing garum or some other salty fermented sauce). As for the baklava:

Place sugar, water, lemon, orange, juices from each and cinnamon in a small saucepan. Bring to a boil, reduce heat and simmer for 10 minutes. Stir in honey then return to a boil, remove from heat and cool to room temperature. Pour through a fine sieve, squeezing solids to get the goodness out. Chill for an hour or so.

Whisk everything but the butter and phyllo in a bowl.

Generously brush a glass 9x13 baking dish with melted butter. Check the size of your phyllo and trim it so you can make it fit in the pan well. Layer two sheets, then brush with butter. Do this four more times (ten sheets with butter every other layer), then spread about 1/3 of the nut mixture evenly on top. Drizzle it with a couple of tablespoons of butter. Repeat two more times, then the rest of the phyllo, still two sheets then butter. Butter the top. Chill for 15 minutes to set the butter, then cut into squares. Cut the squares into triangles for a traditional presentation. Be sure to cut all the way through.

Bake until golden brown, 50-60 minutes. Move to a cooling rack, then slowly pour the chilled syrup over the pan, around the edges, into the crevices and all over the top. Let stand at room temperature for at least 8 hours. Baklava does not need to be chilled (especially since it will not linger that long…)

This is quite a feast here! Everything looks superb! Wish I could taste that baklava right now!

All the food looks delicious! No one in my family measures ingredients except me. I wish I could just throw stuff together that easily.

I love love love falafel. And pita and souvlaki and tzatziki and dolmades (stuffed grape leaves). Yum yum yum. wish I could have been there....

Bob,
I love it all.....and I will eat your portion of the grape leaves, happily!

Love all that Middle Eastern food as you know!

Oh this looks sooo good. What a delight to see so many of my favourite foods on one table. I'm only sorry I don't get to eat them. Love the idea of including orange juice in baklava.

It's a different meal to me..esp when it comes to Greek and Middle Eastern food :)