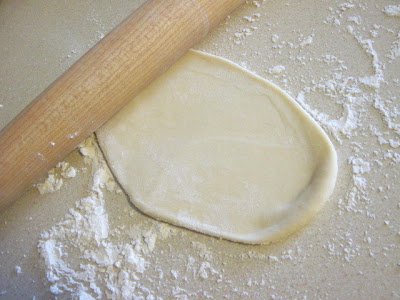 -Beat the egg with the salt and a 1/4 cup water.
-Put the flour in a mixing bowl, make a well and add the egg and water mixture.
-Mix it as much as you can with a spoon.
-Add as much water as you need to get a dough.
-Knead for a couple minutes, until it forms a smooth, pliable dough.
-Cover it with plastic wrap and let it rest for a half hour.
-Roll small (about thumb sized) pieces very thin on a well floured surface or use a pasta machine.
-Use it for whatever you wanted wonton wrappers for. Store in a plastic bag in the refrigerator or freezer until ready to use.
(I got the recipe from here)

Ok, I know I had said I was going to post about that casserole this week. But I'm wicked excited about making my own wonton wrappers, so it's getting posted first and that's just the way it's going to happen.

I decided to make them kind of spur of the moment. My girlfriend is away for a few days, so I'm bored. Which usually means I make some kind of bread, since it takes some time. I don't know if wonton wrappers really count as bread, but the concept is the same. There's kneading and resting and all that. Now, I had always heard that making wonton wrappers was hard, but I didn't think it was that bad at all. I think the main issue people have is getting them as thin as they want and I'll admit that's a problem. But I just let them be a little thick and didn't worry about it. It made them a bit chewy, but I liked it fine. If you have a pasta machine you can get them really thin, but I don't have one. They're one of those things I'd love to have but just don't really have the room for. Anyway, rambling aside, wonton wrappers are easy. You should make some. Here's how.

Take an egg, three quarters of a teaspoon of salt and a quarter cup of water and beat them together. 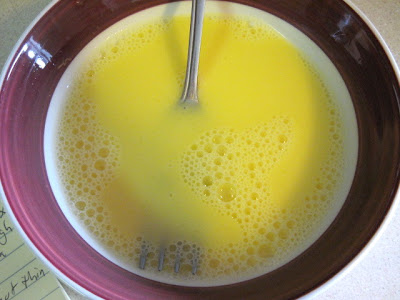 Put two cups of flour into a bowl and make a well in the center. Add the egg mixture 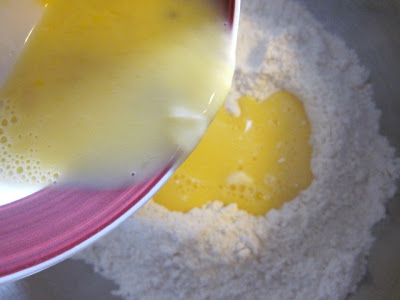 and mix it together as well as you can with a spoon. 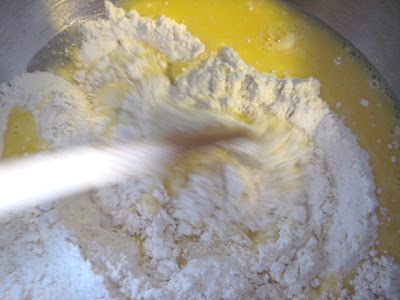 It will look really dry. 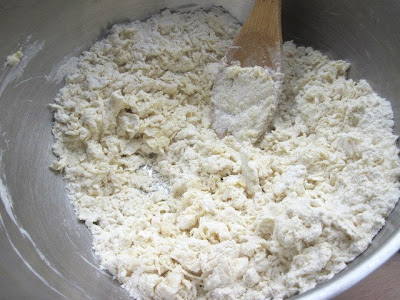 That's because it needs more water. 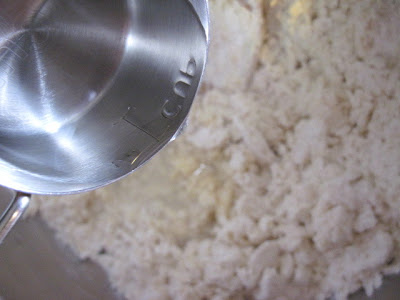 I'm sure it's my keen grasp of these kinds of details that keeps you guys coming back. Heh. I wound up adding almost another quarter of a cup. That turned it into a lump of sticky dough. 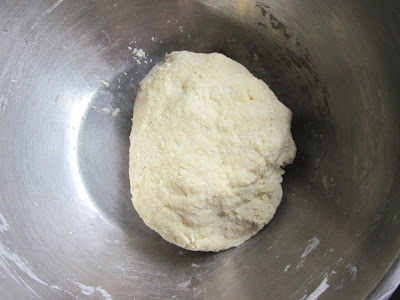 I left it sticky since I would be working more flour into it as I kneaded. 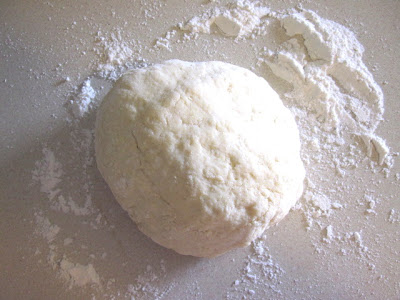 Which is what came next. 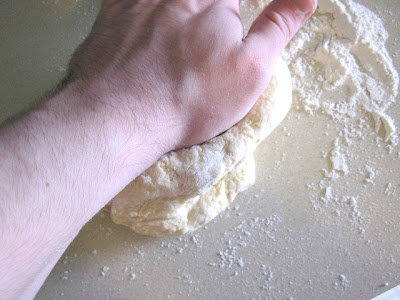 It took a few minutes (maybe as many as five like the recipe called for, but I don't think quite that long) before it turned into a good, firm, cohesive dough. 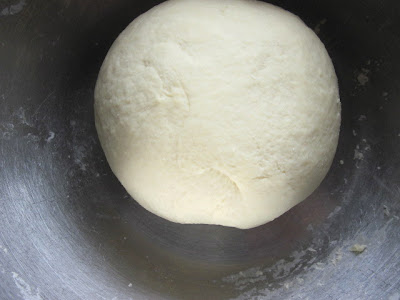 The dough is firmer than bread dough, so it's a little tougher to knead, but you don't have to do it for as long. Now you just cover it with plastic wrap and let it rest for a half hour. 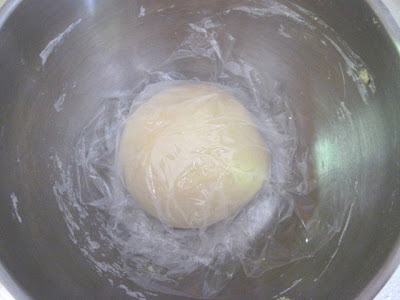 What you get is a soft, pliable but not very elastic dough. 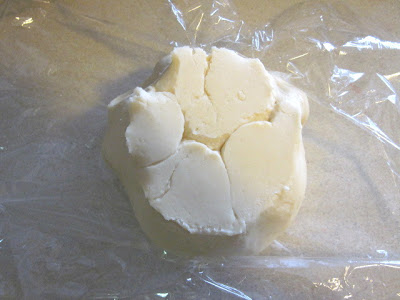 This means you can roll it out but it doesn't snap back much. 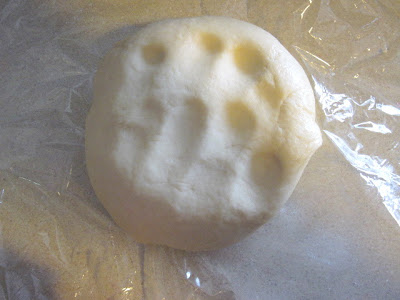 I just cut chunks the size of my thumb off 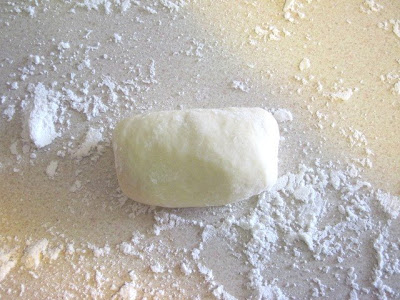 and rolled them out as thin as I felt like. I just barely made this stuff today and the thing I had planned kind of fell through, so I haven't done too much with it yet. But I did make a little something that I'll show you. I rolled out a chunk of dough and put a big chunk of pepper jack cheese on it. 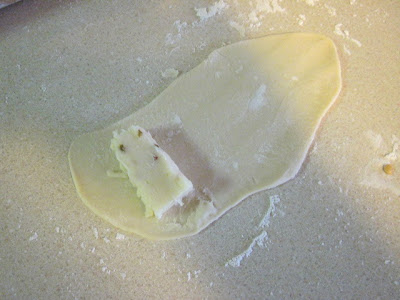 Then I just rolled it up 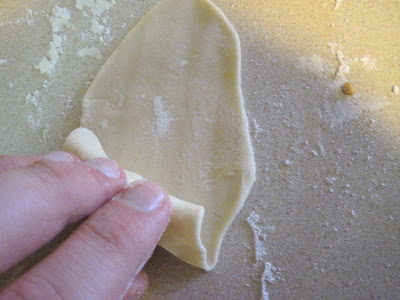 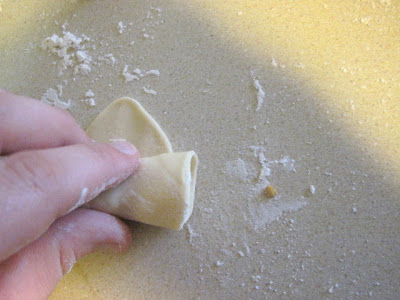 and twisted the ends like a tootsie roll wrapper. 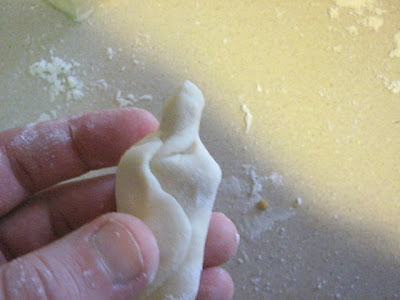 And deep fried it. 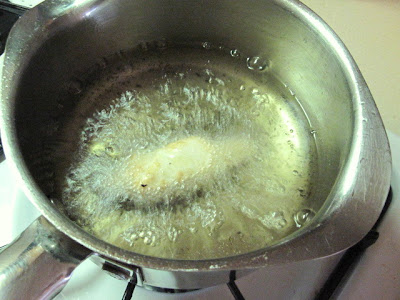 This is the first time I have ever deep fried anything. 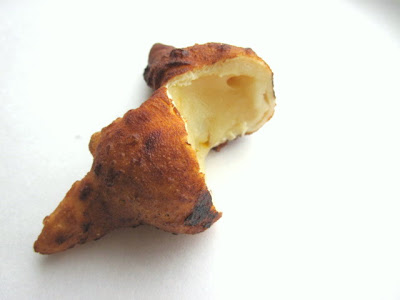 It was wicked good. 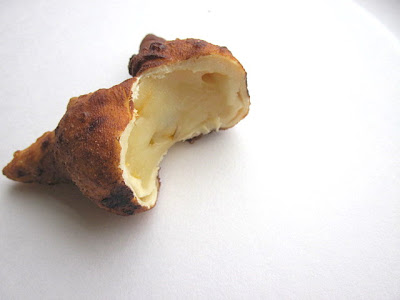 A little ham and mustard in there would have been nice. I'm going to do some actual Asian style stuff with the dough too, I just need a little time to get the stuff together. But I still have a bunch of the dough left and several days of only cooking for myself ahead of me.

Don't forget to enter my giveaway!


Email ThisBlogThis!Share to TwitterShare to FacebookShare to Pinterest
Posted by Bob Labels: asian-esque, bread, cheese, deep fried at 7/09/2009 12:00:00 AM

I'm cracking up. I saw the title and I thought, oh cool things to make with wonton wrappers. But no, you have to be too freakin cool and do a post on how to make wonton wrappers! You're awesome! Good job!

We are SO going to have to get together and make potstickers of assorted fillings.

Stupendous Bob! I never attempted to make my own wrapper. Didn't know how manageable it could be. Thanks for sharing!

Oooh. Homemade wonton wrappers. And fried cheese. You've won me over with this one, Bob.

Honestly, though -- I thought wonton wrappers would be really tricky. Am happy to know it's within reach.

Would you say it's worth the work to make your own??

I LOVE deep frying... but making dough scares the crap outta me!!!

Well, that is just totally cool! Still, I do like to buy my wonton wrappers because I am lazy and lack your obvious ambition! I enjoy deep-frying but don't do it that often as it isn't fabulous for ye olde waistline.

That is seriously awesome. How fabulous that you did it from scratch!

Elra: Thanks! Yeah, it wasn't that bad.

Lo: I would definitely say it is. It doesn't take long and the flavor is great.

Spryte: Heh, that's funny, deep frying freaks me out, but dough is nothing. :)

Wandering Coyote: Tell me about it, I don't think I'm going to be doing a lot of deep frying. But I had to do at least a little bit.

Imagine what you'll be making with those now!

Serious? About the deep frying? That is so cool that you made your own wrappers. I bet their really good - can't wait to see what you make.

Wow, well...welcome to the world of deep frying goodness! These look amazing.

Seriously, deep fried cheese wrapped in bread? I think I'm in love. With the food, not you :)

I can't believe you made it from scratch, that's amazing! lazy me buy store bought ones ;p

Wow, how impressive! I don't even make wontons with packaged wrappers... and I don't deepfry either (much to my husband's chagrin). They're gorgeous, and I bet they're absolutely delcious.

I have never thought about making those myself. Hmmmm I will have to try that.

Oh my! I don't deep fry often, but I feel that when I do it needs to be worth it, and my friend, this looks worth it!! LOL!! I love that you made wonton wrappers, something I have always wanted to try!! Fabulous!

I've always wanted to make my own wrappers, but I have a huge problem with normal pie crusts being too tough and chewy and those actually have fat in them so I don't know how wonton wrappers would turn out for me. I can't wait to see what else you're going to stuff with the wrappers.

Oh wow! You made your own wonton wrappers. That's so freaking cool. I'm Asian and the closes I ever got was buying the wrappers from the store. /hangs head in shame. lol

I bow my head to your ingenuity... I had never even thought of making won ton wrappers from scratch.. AWESEOME!!! I have to try this!!

This is great! I rely on the store-bought wrappers but this is so easy to do and it would be perfect for the 'roll-up' pizza for which I use the packaged stuff now. Thanks for working it out for us!

Wow, I'm totally behind on blogs...just doing some catching up. Wow! I had no idea you did wonton wrappers...great minds think alike! Too funny. They look yum. Your pictures are getting better with every post too--gorgeous!

Thanks! I didn't realize that wonton wrappers are made from the same ingredients as pasta dough! If you liked making these you should totally consider finding space in your kitchen for a pasta machine. The dough recipe is identical, and as you pointed out, the hardest part of the process is rolling out the dough into evenly thin segments. My simple, 40$ pasta maker cranks out dough to 6 different thicknesses, and has an attachment for cutting linguini, and spaghetti. There is nothing so easy and impressive as serving your guests homemade pasta!

I really like this. You have a sense of humour! Thank am about to make wonton soup XX