My brother made tamales the other day and offered to give me some. Now, I had never had tamales before. And for some reason I had it in my head that I didn't like them, despite not really knowing what they are. So I asked my brother what, exactly, a tamale is. He said they're basically a corn flour (masa harina, traditionally) biscuity kind of thing, full of spicy shredded meat (or whatever) and steamed in a corn husk (or parchment paper). 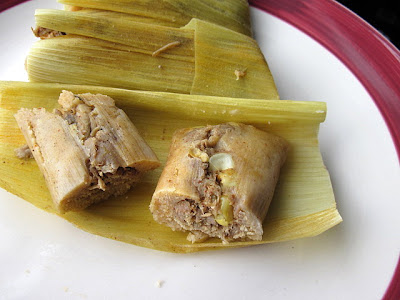 Nothing about that sounded bad, why did I think I didn't like them? 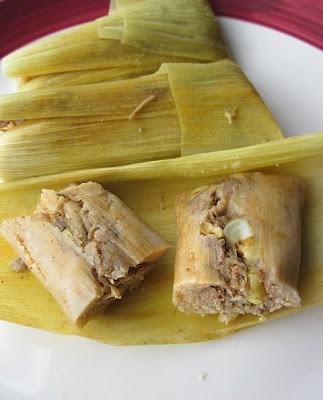 They are wicked good. Now I'm going to have to make them myself, of course. My brother used Alton Browns recipe (lightly adapted, I believe) and it was awesome. It used turkey and my brother added some fresh corn.

So, does anyone out there have experience making these? Any tips, tricks or warnings? Other than "only make so many, you're going to eat them all with a quickness!" of course.
Email ThisBlogThis!Share to TwitterShare to FacebookShare to Pinterest
Posted by Bob Labels: mexican-esque, turkey at 8/09/2009 07:02:00 PM

I love tamales!!! My former co-worker's mom used to make some of the best tamales I've ever tasted. I actually miss them. Sometimes I feel like calling up that co-worker just ask his mom if she can make some for me. LOL. Nice job with using turkey in this.I've never had that before. I'd love to try and my my own sometime, but I'm afraid I'd just screw it up. I guess it wouldn't hurt to try.

I have no experience with tamales. I'll be interested to see what you learn and how you do it.

My husband and I have made them several times. First time we slow cooked a pork shoulder and the second time we grilled a pork tenderloin (crusted with a covering of mexican spices). We shredded the meat and mixed with a little homemade enchilada sauce, and that was the filling. Wanna talk "wicked good"? O.M.G.
Damn! Now I'm wanting tamales!!!

I've been wanting to make tamales since forever! I looove them! But I'm afraid to do it on my own. From what I've heard (from some of the mexicans that I know) is that its a lot of work. like 2 days or something? I dunno. I got invited to help this year during the holidays...so we'll see what happens. i sure would like some right about now!

Danielle's right, it's a lot of work, unless you happen to have some slow-roasted pork shoulder already cooked, and masa and corn husks already in your pantry. Then the filling, wrapping, steaming. Ugh. I just go to the Mexican tamale place up the road and buy a dozen.

I've never made them but I've eaten them. They are out of this world delicious! Terese of Mexican American Border Cooking has a three part series on making them. Here is the link to the first:

The link isn't working - I hate when that happens. If you go to her archive for NOV of 2008 you will see the tamale posts.

I could eat one or two tamales a year and be satisfied. I don't like a lot of masa in mine. Best ones I ever had were sweet tamales with pineapple and raisins instead of meat. Tons of work... have help ready!

Bob,
Thank you so much for visiting! It is so good to be back! I had to laugh at your "not liking tamales because of the corn husk" comment. The first time I tried tamales I was about 10 and didn't know you weren't supposed to eat the husk. I thought they were disgusting! Needless to say, the next time they were offered to me and I was told to remove the husk, they were much, much better. :)

Oh, Bob, you are hilarious!

I have never made them myself, but I am always MORE than happy to eat them. ;) From what I understand they are even more labor intensive, like Greek Dolmathes & Polish Perogies. Takes a lot of time to stuff all those husks... That is why I make pizza instead... LOL

Jenn: Just because you might screw it up is no reason not to try it! Half the time my screw ups turn into something new and exciting. The other half of the time they are abominations. But still, it's always worth trying. Heh.

Jean Bugs: Yeah, that sounds awesome. Do you have a recipe posted anywhere?

Danielle: I don't know about 2 days, my brother did some in an afternoon. You should definitely help out, take pictures and post them! Then I can learn from it too. :D

Vicki: Man, I wish I had a tamale place up the road. I don't think my local Mexican family restaurant thing makes them either, which sucks. But now I've tasted it, so I have to make them. I'll just set aside a weekend for it. Heh.

Reeni: Sweet, thanks! I'll definitely check that out.

Karen: Sweet tamales? What a great idea! I'm going to have to work on that. You could make dessert and the main course all at once!

I do love tamales and have had some excellent ones but have never made them myself. Please do post about yours when you make them!

Oh my gosh...makes me laugh!!! I love tamales. And recommend making LOTS at a time, actually. They turn into an all-weekend event when we do them. All I can say is plan. Gather...ingredients and bodies and make a party of it!

I've never eaten tamales either. I used to think they were like lobster tomalley, which I have tried and definitely do not like!! These look good, so I'll have to try tamales too.

I have never made these, now I feel inspired!Figtreeapps

Tamales! Yum. We picked up a few when we were in Mexico a few years back and they were the best. I think the best tamales are those with hearty fillings like pork or sausage and are hot and spicy...

To all those wondering, yes it is some work. But some of the best things are, and it is a lot of fun too. I made them over the course of about five hours, but a lot of it was passive. The turkey simmered for about two hours with no attention, then cooled. Assembly of about 18 tamales only took maybe 20 minutes, then back on the stove to steam unattended for 1 1/2 hour

These were my first attempt, and the dough was a bit dry. I also made them with corn husks from the corn I put in them, which turns out to be a problem -- you only get so many tamale-worthy husks per ear, the rest are too small. To finish the masa I made a few in parchment paper, but I really think they were not quite as good as the ones in the corn husks.

Oh, and after all of that I still have about four cups of highly seasoned turkey stock. I am making brown rice with beans using that for dinner tonight, and topping it with the leftover filling. I am also made some fresh corn tortillas which I cut into wedges, sprayed with oil and dusted with garlic salt. I am starting with twenty minutes at 300 degrees, and we will see what we get :)

That is so funny! I used to think the same thing about tamales - that I wouldn't like them - because of the corn husk. But I had some recently for the first time and loved them!

I never made tamales...but love them. The one that you made with turkey sound and look so yummie!

This is new. I've never had tamales but they sure sound good!

Dude! I LOVE tamales!! I really suck at making them though. Well... I only tried once and it took a really really long time and they came out really dry!!

I need to try again!

Can I boil a turkey breast for tamales?

Can a turkey breast be boiled for tamales