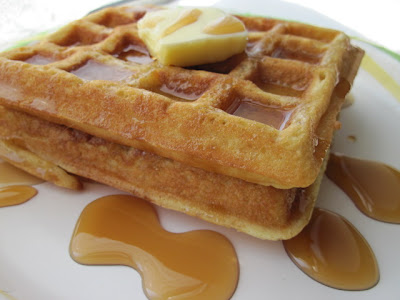 Combine the flour, cornstarch, baking powder, baking soda, salt and sugar. Add the oil, vanilla, egg and milk. Mix well. Let it rest for a half hour. Make the waffles according to your iron's directions.

Sorry, no step by step for this one. In fact other than the one up top, this is the only other picture that came out well. 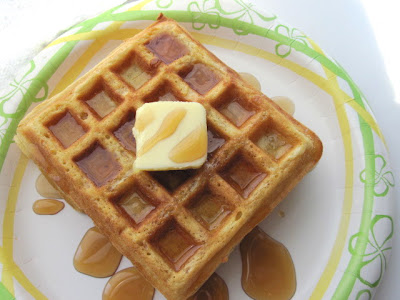 I got the recipe from here. What caught my eye was all the cornstarch in it. I'd never seen waffles that used that before. Apparently it's supposed to help make the outside crispy and the inside soft. A noble goal. But, I've been having trouble with waffles lately. The outside gets lovely and brown, but the inside never cooks quite right. Has anyone else had this happen? They look done, they've been in the iron plenty of time, but they are still almost wet in the middle. I know I cooked them long enough, but they don't seem finished. Maybe I'm leaving them in too long and that makes them collapse? Can that happen?

The flavor is great, the outside has a nice crispness to it, but the middle is... flawed. This happened when I made the sour cream waffles last year too. Although I didn't mention it then because I thought it was that I had forgotten to put in the baking powder. Heh. But this time I know I put in everything and it still happened. Why is this, does anyone know?


Email ThisBlogThis!Share to TwitterShare to FacebookShare to Pinterest
Posted by Bob Labels: breakfast at 8/20/2009 04:40:00 PM

Bob, these look wonderful. I too am of the maple syrup persuasion when it comes to pancakes and waffles. However, since I live in Belgium, I sometimes have to compromise for the sake of cultural expediency and eat them plain.

But don't pity me. The ones we eat plain here (I mean Liege waffles, not Brussels waffles!) are a totally different animal--heavier and full of cinnamon and little pearls of sugar. They're delicious on their own. Besides, the maple syrup dripping down your arm is sometimes less than fetching.

I'm glad I found your waffle adventures. I'll be back to see what else you're up to.

I have to slather my waffles and pancakes with a poolful of maple syrup. and some butter. LOL. I wish I had a waffles maker!!!!!!!

I just bought myself a small waffle maker 2 weeks back but don't have a recipe for it yet. I'm encouraged to try yours.

NO fair me looking at this delicious waffle while Im having coffee with my granola fiber bar. I want that instead.

I dont have a waffle maker so I cant offer advice, but they sure do look darned delicious!

Waffles are always tricky to make just right to be crispy on the outside and soft on the inside. I find that my waffle maker is getting a bit old and now it takes a lot longer to cook the waffles properly. I will definitely try the cornstarch addition, excellent tip!

I haven't made waffles for such a long time after my son grow up. I even almost forget about this breakfast goodie. Yours look delicious!

They came out nice! Good for you and a very interesting recipe I'd say...never heard of a cornstarch waffle.

Isn't that the best part of waffles the crispy outside? I love it. I actually was looking for a good waffle recipe some 3 weeks ago. Thanks for this, I will give this one a whirl.

Kate: Wow, those sound awesome. Do you have a recipe?

Petite Nyonya: If you do try it, you should let me know how it turns out!

5 Star Foodie: Hm, my iron is a bit old. That would be awesome if it wasn't me screwing up. Heh.

Elra: Thanks! Don't forget about waffles, that would make them sad.

noble pig: Thanks! I hadn't either before this.

Dawn: It totally is. Let me know how they turn out for you!

You know...i have never in my life made a single waffle. I think I had a really old waffle iron that use to my my mother inlaws...but i have no idea where it is now. But I do prefer waffles over pancakes. Its that crispy outside yumminess

Yeah, I was thinking that it might be the waffle maker, too.

The high cornstarch content also equals less gluten, which is desirable in a pancake/waffle mix.

Bob, I've never made Liege waffles--they're street food, eaten in the hand. You have to know who makes the good ones, though. I googled and found a recipe that sounds genuine:

They're reputed to be a lot of work, but when they're good they're veryvery good! Let us know if you make them, ok?

Interesting. We assumed the cornstarch would make them melty and fluffy inside since that's what happens when you use more cornstarch than flour in a buttery cookkie. It's worth it to give it another go.

Sorry I can't help you figure it out, but these waffles sure look great anyway!

Mmm...love waffles. Check out your waffle maker - let it heat up, then touch it quickly in a bunch of places to gauge the temp - you might have a cold spot in the middle.

I think it's the waffle maker, too, but I think it's the type you have. I hate the belgian waffle makers--waffles are supposed to have *little* squares, four squares equalling one perfect bite. You know, like the one Mom had! I've never had waffles come out right for the Belgian type; I have a waffle maker that makes four square (bread size--perfect for reheating in the toaster) waffles and they are always perfect. I use the recipe Mom used, too--you know, BH&G, 1/2 a cup of oil, beaten egg whites--that's the one. :-)

I made waffles for dinner tonight - savory style. If I had maple syrup in the house I'd be eating the leftovers right now - because of this post. I'm not sure what could be wrong - probably your waffle maker since you've made different batters and it keeps happening. This looks yummy anyways!

The waffles look perfect. I don't know why they would still be raw in the center. Maybe it's time for a new waffle iron?

Aww, how you've got me craving waffles. I love to put a little bit of butter in each waffle hole and smother the whole thing in syrup.

I've never made waffles before so can't help you on that. Cornstarch caught my eye too, nice to know what it does!

waffles are my kids favorite breakfast!! these waffle looks wonderful!! sometimes they are very tricky.. hehe.. love ye blog very much..
cheers and have a great weekend!!

You've got the dreaded Waffle Curse, that's the problem! You had better go see the village witch doctor for an amulet or your waffles will NEVER turn out. Hmmmm, could it be your waffle iron?

These look great! Even if they're less than perfect I hope you still enjoyed them with lots of syrup and butter (I'm not a jam person either!)

You mentioned the magic waffle combo - crispy on the outside, soft on the inside. Curses that I don't have a waffle maker!

All I can say is mmmmmmmmmm Waffles!

They look yummy! Wished I had a waffle machine :D