All measurements are estimates I'm afraid, this was whipped up on the fly. Just adjust everything to taste. 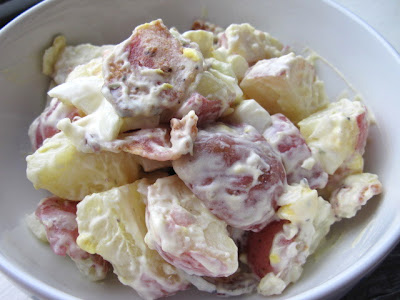 Cook the bacon and cut into 1/2" pieces. Peel the garlic and boil it and the potatoes until they potatoes are cooked. Pull out the garlic and mash it into a paste. Cut the potatoes into 1" cubes. Sprinkle the pickle juice evenly over the potatoes while they are still hot then let them cool completely. Mix together the garlic paste, onion, mayonnaise, mustard, tarragon, salt and pepper. Chop the eggs and fold them, the bacon, the potatoes and the dressing gently together until everything is coated. Let chill for at least an hour, overnight is best.

Here's a weird thing: I think this is the first potato salad I've ever made. How does a dude who has been cooking for virtually his entire life and loves barbecue manage to go this long without making potato salad? I'm not really sure and I was there for most of it. Part of it, certainly, is that my sister in law makes a kick ass one, which limits my need to make my own. But as for the rest... I just don't know.

So when my girlfriend comes home with some duck eggs (which are a post by themselves, they are from the same source as the fresh chicken eggs I got some time ago) and a request for potato salad I was kind of at a loss. She wanted me to make a recipe from America's Test Kitchen, but I couldn't find the magazine it was in and I'm not paying for a website that has the same recipes as the magazines I already have subscriptions to. But that's a rant for another time. What we could remember is that they sprinkled some pickle brine on the hot potatoes. And my girlfriend is a bit nutty about pickles. So I took that idea and made this. 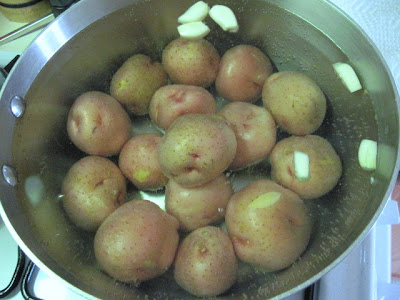 I took a page from my moms mashed potato method and boiled some garlic cloves with them. 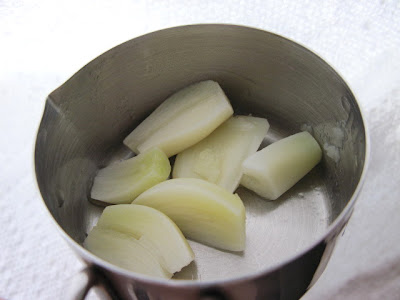 This softens and mellows them and makes it easy to mash them into a paste. Mixing a little kosher salt in there helps the mashing too. 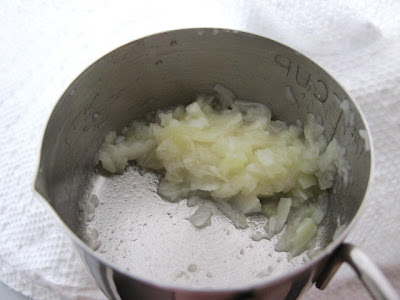 In fact, it mellows the garlic a great deal so if you do it this way use at least twice as much as you would if it were raw. Once the garlic was soft enough to mash and while the potatoes were finishing cooking I made the dressing. It was a bunch of mayo, that garlic paste, diced sweet onion, mustard, salt, pepper and tarragon. 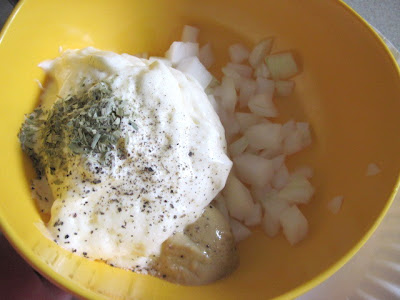 I love tarragon in mayonnaise based salad dressings, it's such a great combination. I also like sweet onions the best for these things, but use whatever you like. 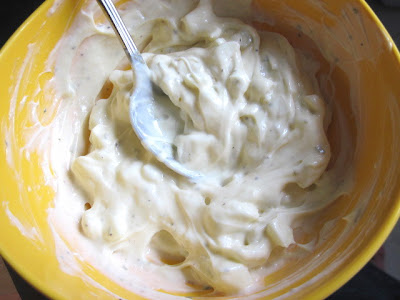 I also didn't measure anything. Again. And it sucks because the proportions came out perfect. Anyway, I chopped up the egg. 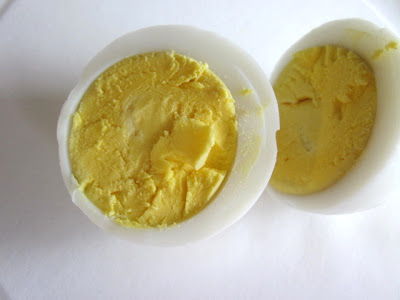 Look at that. See how much yolk there is? Duck eggs are my new favorite. I pulled the yolk out of the white and chopped them separately. 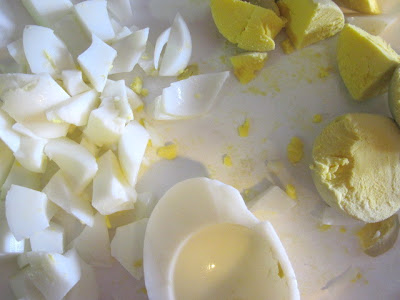 I wanted the yolk in bigger pieces so they wouldn't break up all the way when I mixed it up. But before I could get to mixing I had to chop up the potatoes. 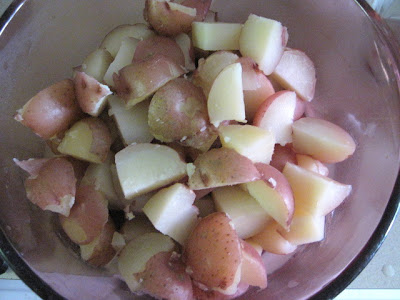 And then sprinkle them, while they were still hot, with pickle brine. 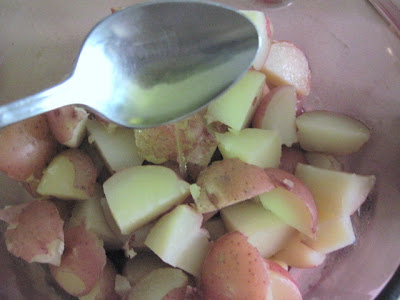 You could use vinegar if you wanted, but the sweet zinginess (I used some from bread and butter pickles) from the brine was really good. Putting it on the potatoes hot makes it soak right in and not water down the dressing. Which is good. Then you need to let the potatoes cool completely before you mix it all together. 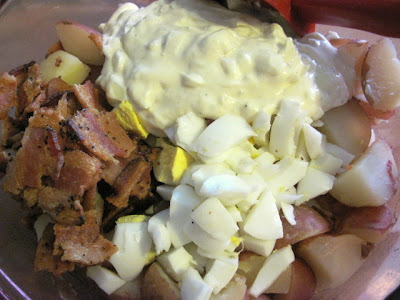 Oh, I also made bacon. It doesn't really matter when it's made for stuff like this, you could make it the day before if you wanted. Since it's going to be soaking up the dressing for several hours the texture isn't going to be perfect no matter what. So why stress it? Anyway, once the potatoes have cooled, you want to mix it all up. Well, fold it gently so everything doesn't get all mushed. 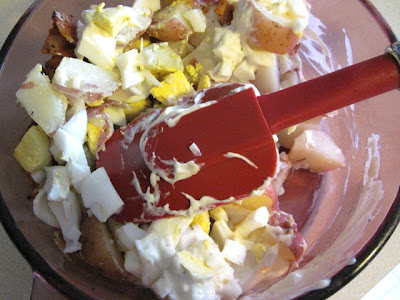 Unless you like it like that, then mush away. I briefly toyed with completely mixing the egg yolk into the dressing, but decided not to. I bet it would have been good, but I wanted chunks. Maybe next time I'll do half and half. Then it was chilled for several hours and that's that. 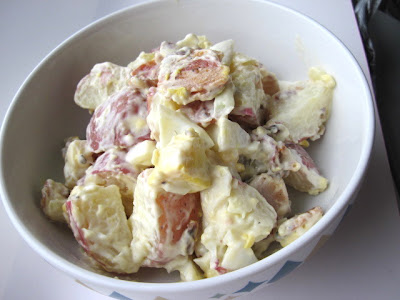 Simple and awesome. My girlfriend said it was the best potato salad ever. She might be biased because of the bacon though.

I saw the word bacon and I had to come over. Nothing beats bacon and potatoes together.

I never measure anything ever, so whenever I make a recipe of something I've made I make estimates...I suppose I should always state that as a caveat...

I never follow a recipe religiously but I have to remember some people do.

oh! my favorite ingredient in this is the tarragon!! I've been loving that herb...it came late to my palette of herbs...so now I have something else to try it in.

Potato, bacon and duck in the same recipe title? I'm there.

This looks amazing! How do the duck eggs taste?

Duck eggs huh? That's new and different. I love me some tater salad!

Jenn: So true, it's a great combo.

monicajane: Thanks! Tarragon is something I've only been using for a couple years, but I love it. It's one of the things I toss in when I can't think of what something needs. Heh.

Wandering Coyote: Thanks! They don't taste much different from chicken ones, but they have a lot more yolk.

Awesome!! I want some duck eggs (the yolk)!!! This tater salad sounds so amazing...of course bacon'll do it everytime...but the pickle juice & the garlic are totally rockin it, too!

It doesn't hurt that some of those duck eggs were something like 48 hours out of the duck, either. Although I am told that that does make them harder to peel. Tastes good though...

I used one of the tiny chicken eggs to make a little mayonnaise, then made egg salad with some of the duck eggs. That was good too :)

Duck eggs are very yummy...my sister has ducks and chickens that lay and I had my first duck egg at her house...they are huge and seem to be richer...and they have very hard shells!!

is that your experience? It's been a while since I ate one but that seems to be my memory.

This looks incredible! Really delicious. I've never had a duck egg - I'm all about the giant yolk!!

This potato salad looks excellent. I love your addition of tarragon in the mayonnaise and the use of duck eggs is very unique.

Glad this turned out to be a winner! I never measure for potato salad, either, but it always seems to turn out great!

Holy moly, this sounds awesome. Why have I never put bacon in potato salad? I love tarragon in mayo dressings too. Nice work.

MMMMM Potato Salad.. and with Duck eggs!!! I am salivating like crazy... LOVE duck eggs!!

Duck eggs. Now THAT's different. Not too often we even think about the fact that ducks have edible eggs...in fact, we've never though of it. Like that...

girlichef: Thanks! The pickle juice worked great, the flavor was subtle but definitely there. Yeah, if I could only get duck eggs for the rest of my life I would be ecstatic.

monicajane: Yes, they do have really hard shells. And they are more rich and spectacular. ;)

Reeni: You should get some if you ever get the chance, they are the bomb.

Karen: Heh, but it does make it hard to give out the recipe.

Hungry Dog: I don't know why you haven't put bacon in potato salad. It's the best. Heh.

Culinary Alchemist: Thanks! Why am I not surprised that you've had duck eggs? :D

Duo: I hadn't either till my girlfriend showed up with some. Now I'm never going to forget it.

Oh gosh! The yolk is like 90% of the egg! Your potato salad sounds really delicious with bacon..yum

Congrats on your first tater salad.
I love mine w/ pickle relish, mayo and tons of eggs (duck or chicken eggs!).
Looks delish!

OMG it looks superyummy. Wine will do better with it. Nice blog

I just bought duck eggs for the first time, and am so happy to have found this recipe! Fixing it tomorrow.