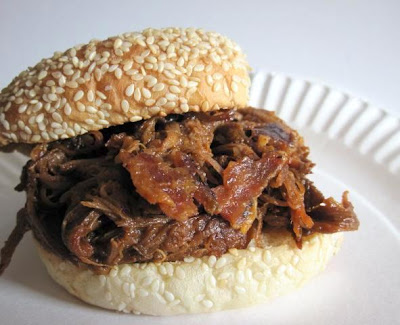 I didn't get many good pictures, but this is what I did.

I pulled the bacon off and put it aside. Then shredded the beef and simmered it over low heat in a little barbecue sauce till most of it had been absorbed. Then I pulled most of the fat off the bacon (otherwise it would be greasy) and mixed that in and let it simmer a bit more. That last simmer caramelizes stuff up a little, you get great flavor that way. Not to mention helping the bacon flavors get in there. It sucks a bit to clean though, it's a pot soaker. But that was that, barbecue shredded brisket sandwich. With bacon.

Some cheese would have been great with it and a nice cold IPA. You could do this with leftover brisket or if you make one and it comes out tough for one reason or another. It adds flavor and moisture to dry stuff or reintroduces it to overcooked meat. Instead of a sandwich you could also use it in casseroles, calzones, or on pizza (I would put it under the cheese). I'm going to put the chunk I have in the freezer in tomato sauce I think. I'm guessing that will be a good time.

Keep thinking that I'll make bbq brisket one day, but never got any chance yet. This look of your sandwich urge me to try it soon.

Looks like a nice big spoonful of coleslaw would be good with this!

you sure do like your sandwiches! :) looks really good!

Almost looks like a sloppy joe. ;-) Nice use of leftover brisket. Yum!!

Great use of leftovers! yum yum with bacon!

I don't think that picture is bad at all. I could go for one of those right now. It's lunch time!

So yummy with the bacon!!!!! Mouth-watering delicious.

Totally, Completely and Irrevocably Awesome!!!! My key board is shorting out!!!

Note to self... don't read Bob's blog when hungry... it is torture!