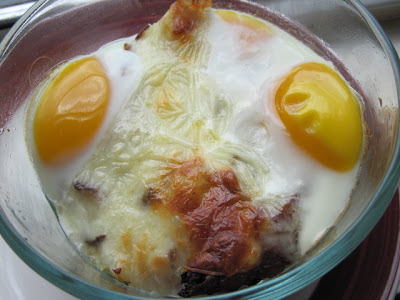 Preheat the oven to 450. Heavily butter a 7-8 oz ramekin and place a crash hot potato on the bottom. Put as much cheese as you want, plus anything else you're putting in, on top and toss it in the oven to start the cheese melting, maybe 3 minutes or so. Take it out of the oven and let it cool a bit, then put 1-2 eggs on top, depending on the size of the ramekin. Place in the oven in a hot water bath and cook for 10-15 minutes. Serve.

This will look somewhat familiar to some of you since I basically stole the idea from a post over at Culinary Alchemy. I saw it and thought "That looks awesome. I have fresh eggs. I'm making it tomorrow." And I did, sort of. Something like it anyway. I didn't have cream so I couldn't do that, more's the pity. And I used a different kind of cheese. And instead of sliced potato (Shane either has bad ass knife skills or a mandolin) I used a crash hot potato. So I suppose we could say I adapted it, that sounds better than stealing. Heh.

First, I whipped up some crash hot potatoes. 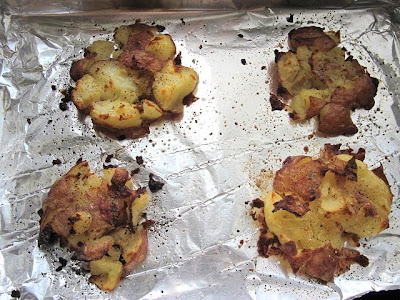 I'll take any excuse to make these bad boys. These were very simply seasoned, just butter on top (instead of olive oil), garlic powder, onion powder, salt and pepper. Then I buttered the hell out of a 2 cup casserole dish. 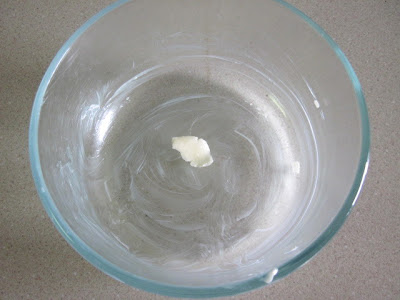 I was going to use my 7 oz ramekins, but I didn't feel like fiddling with more than one dish. Next came about a potato and a half. 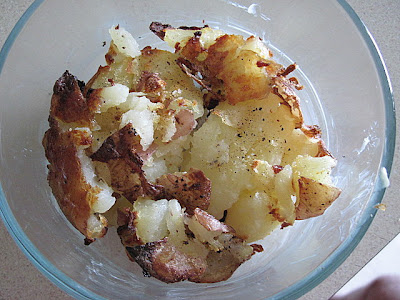 If I had been using the ramekins it would have been one per. Then I put a mixture of extra sharp cheddar and a little mozzarella on top 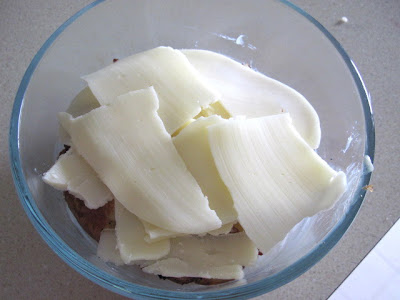 and baked it for a couple minutes at 450. 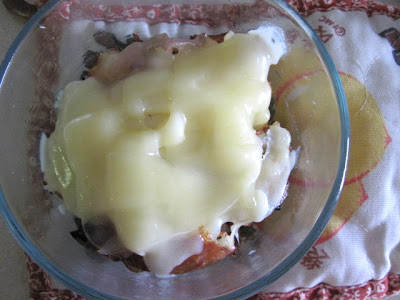 Just to get it a bit melty. I let it cool for a couple minutes and then cracked in some eggs. 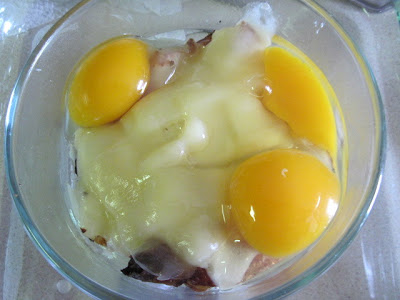 I used three because they were tiny. Three in the palm of my hand tiny. 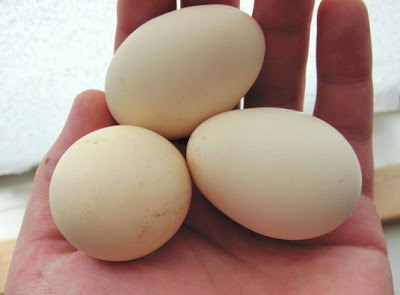 Here I ran into my major problem (other than not having cream). You see, crash hot potatoes aren't very smooth. So the eggs wanted to escape down the sides. I actually lost a yolk to the bottom of the dish. Next time I'm going to be a bit more careful about that, level out the top a bit, make a well or something. But you can't put eggs back in the shell, so I put the whole mess in the oven. Is that a real saying? "Can't put eggs back in the shell"? Seems like I've heard it before...

Anyway, I put it in a hot water bath, although I don't think I did it right, and cooked it for... a while. I kind of lost track of time. I think ten minutes would have been ideal, but it was a bit longer than that. The yolks were a little more done than I wanted, but still creamy. Overall it was awesome. Even if it looked like a chicken, in a Ren & Stimpy kind of way. 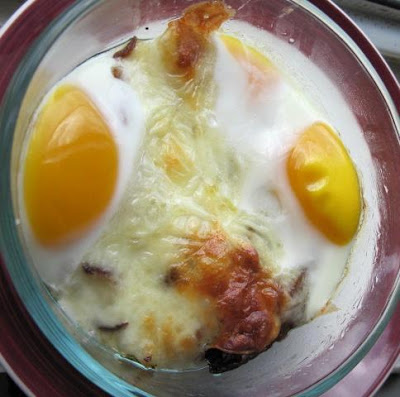 Next time I'm going to have cream on hand, maybe add some garlic and onion too. And bacon. It's got to have bacon. 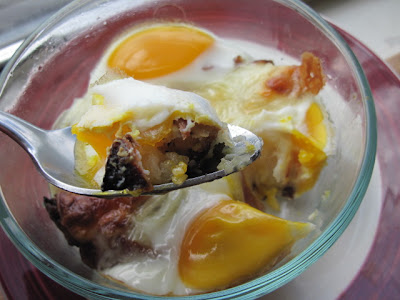 "Even if it looked like a chicken, in a Ren & Stimpy kind of way."

Looks pretty good to me, actually. Great idea for a night when you don't want to cook much but really want comfort food.

Oh this looks heavenly, and all my favorite breakfast foods in one. Id add some softened peppers too maybe. What a great idea and fantastic adaptation!!

You're Right!! It is totally Ren & Stimpy-ish! LOL...sounds delicious, though :D

Looks pretty good to me. I'd have that for breakfast with a bunch of bacon.

I miss Ren and Stimpy. That was probably my favorite cartoon growing up. I remember the day when they use to pay it on Nickelodeon.

No, no, Bob, that is not stealing, simply borrowing. It's a bloggers right! lol I think this looks delicious and you know, I don't think those eggs were overcooked! They are perfectly runny! I need to make me some baked eggs soon.

This looks like a really cool dish! Those eggs are soooo tiny and cute.

Wow, that looks awesome!! What a great combination!

Yum! I will be making this for my daughter and myself for lunch right away!

This looks sooooooo delicious!! Such yummy comfort food! I'm with 5 Star on this one - I want that now - for lunch!!

Wandering Coyote: Thanks! Yeah, it wasn't hard to put together at all.

Duo: Ooo, sour cream is a great idea. Maybe mix some up with some cheese and sill in the areas that aren't full of potato so the egg doesn't slide around...

Donna: If I had had some peppers they would have so been in there. Thanks!

Jenn: Thanks! It was my girlfriends favorite show too, she recently bought the complete DVD boxed set. I think that's what made me think of it when I saw the dish. Heh.

Michele: Nice. That's how I'll frame it! :D Thanks.

Danielle: I hadn't made baked eggs before, myself. Very pleased with how they turned out. But yes. Bacon.

Elra: Thanks, me too.

Renni: Thanks! Heh, I could go for some right now for lunch too.

Bob, This is AWESOME!!! My stomach just started grumbling... YUM!! Always adapted, never stolen (Stolen is SUCH an ugly word) ;) Just as I am now going to adapt what you have already adapted... LOL

You and those potatoes!
I forgot how good they were until I just saw them here!

I actually don't like potatoes, but I would definitely eat them when they're smothered in two of my favorite foods - eggs and cheese!

Stacey: That means you need to make some post haste! Heh.

Palidor: You don't.. like potatoes? Ok Bob, keep it together. Is this any different than when Spryte said she didn't like chocolate? No. Everything is fine. Deep breath... Heh. ;)

Nothing stopping you from doing it with some buttered/herbed pasta or a chunk of toast. Or some cornbread! That would be good. With some green chilis...