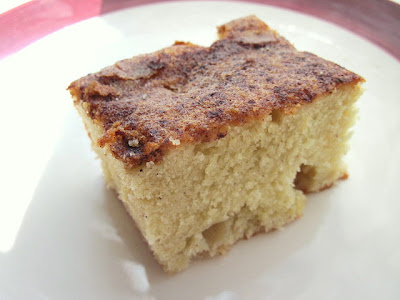 Butter an 8x8 pan and line it with a parchment sling. Preheat the oven to 350. Peel, core and chop the apples. In a bowl, combine the chopped apples with one (of the 3) tsps of cinnamon and sugar. Set them aside. Cream together the butter and 3/4 cup of sugar. Add the eggs and vanilla, mix to combine. Add the flour, salt and baking powder and mix that in well. Add the milk and mix for a couple minutes. Pour of any juices the apples have put out and fold them into the batter. Pour the batter in the prepared pan and sprinkle the remaining cinnamon and sugar on top. Bake till a toothpick comes out clean or with a few crumbs, about 35-45 minutes.

So I had some apples that needed using. Plus those duck eggs that I wanted to make a cake out of. An apple coffee cake seemed in order. I was feeling lazy though and didn't want to make struesel. Now, I love struesel but it can be a pain in the ass. Then I remembered reading in a Cooks Illustrated (I think) that you can get a decent topping with just cinnamon and sugar and decided to try it out. The main cake part is just a half batch of cocoa ripple ring, since that cake is pretty hardy and could handle the fruit. Although I also took some steps to reduce the amount of liquid the apples would put out, but we'll get to that later. Unless you cheated and read the recipe first. Which you probably did. So we'll just get right to it then. 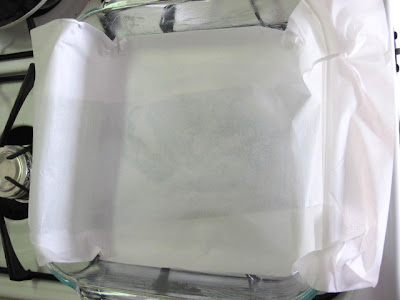 Butter it up and then put a parchment paper sling in there. The sling is great if you want to take the cake out of the pan before cutting it. It's not really necessary, but it's kind of fun and makes things a lot easier. You should also start macerating your apples in a teaspoon or so of sugar and cinnamon. 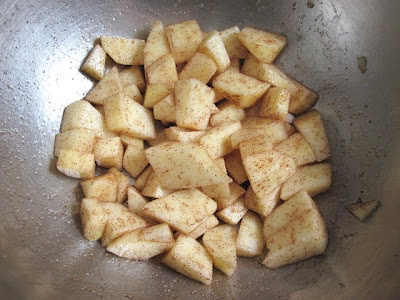 I only used one apple, but I wish I had done it with two. Now you want to cream your butter and sugar. 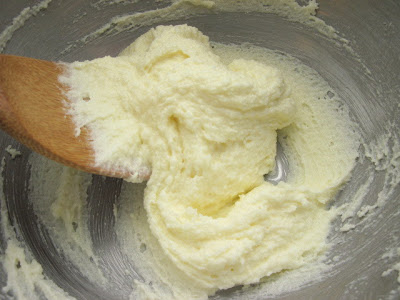 Then add the eggs and vanilla. 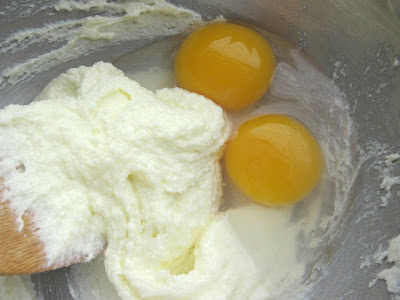 Duck eggs, baby. Look at those yolks! See how dark that is? 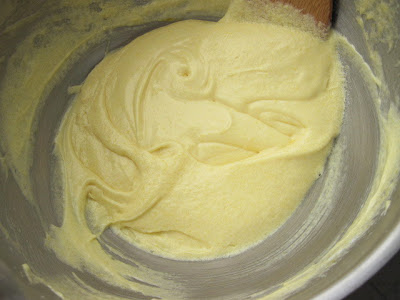 That means rich taste kids. Because it's almost all fat. Yeah. Next the dry ingedients, 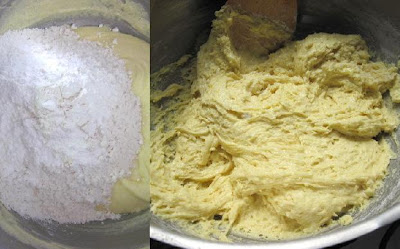 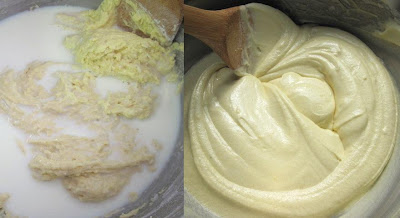 Mix it for several minutes. Now you want to pour off any liquid that the apples put out.

All that liquid that came out of them is moisture that isn't going into the cake. This helps keep it from getting gummy. The macerating might even be something you want to start a half hour or so before you get the batter ready, but I didn't have any problems. Course, I also only used one apple. What to do with all that macerating liquid you ask? Well... I just drank it. Mmmm, appley. 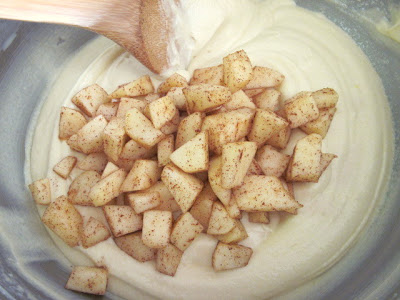 Anyway, fold in the apples and pour it all into the prepped pan. 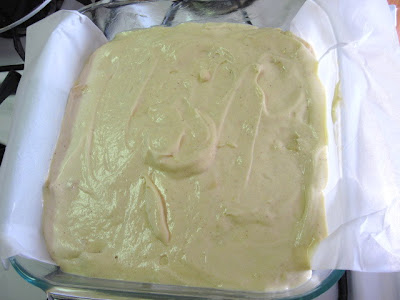 Now sprinkle the top with a couple teaspoons of cinnamon and sugar. 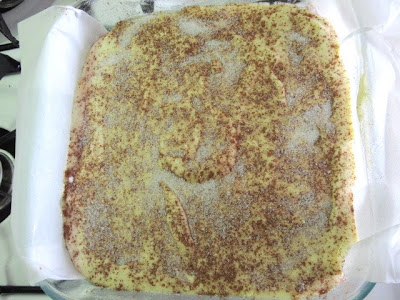 I didn't measure it, but next time I'm going to add more. At least more cinnamon. Maybe even totally cover the top with it, but I'm not sure yet. Now it's just bakies and there it is. 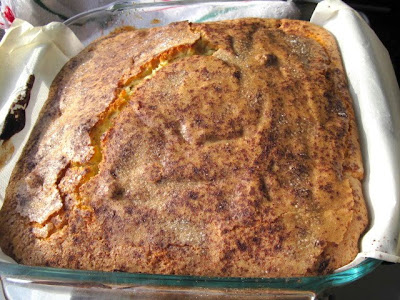 A wicked simple apple coffee cake. It was very good. 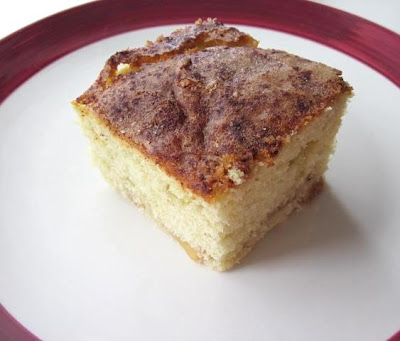 Sure, streusel is a better topping, but it's nowhere near as easy. And this was actually quite nice, it came out a little crispy and had plenty of flavor, even if didn't have any body to speak of. So, if you're in a rush(or just feeling lazy, heh), this topping will do just fine. But if I have the time and patience, I'm going to make streusel.

Email ThisBlogThis!Share to TwitterShare to FacebookShare to Pinterest
Posted by Bob Labels: baked goods, breakfast, experiment, fruit at 8/14/2009 11:46:00 AM

Looks good, Bob. Was that the end of the duck eggs?

Anything that's "wicked simple" has my name on it. Looks perfect for a cup of mid-afternoon joe.

YUM! Would love a piece with a scoop of vanilla ice cream.

I agree, streusel is a pain in the ass to make. Good thing your cake looks so good as is. I'll trade you some gritty almond panna cotta for a slice of Apple coffee cake.

I've never cooked with duck eggs before. Growing up my parents scarred me with Balut, an Asian delicacy. I've kind of stayed away from duck eggs since then. Oy!

Brutal: Nope, one left. I think it's going to be fried.

unconfidentialcook: Funny you should mention that. I just finished my cup of coffee and the last piece of that cake.

Palidor: Yes! But you would want it warm for that.

Pocky: Deal! :D Balut=nasty. Normal duck eggs are amazing though, if you can get some do. They're like super-chicken eggs, they make everything better.

The only form of duck eggs I've ever had were century eggs - pickled.

definitely going to make this this weekend. thanks!

you seriously need to think about a cookbook aptly named "wicked good, wicked easy homecooking"
am I right?

Nice. I love the fact that it's "Wicked Simple" so that means it gets a star in my book. I think I need a piece of that just to get me through the rest of this day.

I've been dying to see you bake a cake! I love the way you make your batter by hand. I tried it a few times, but my batter never looks as smooth and creamy as yours.

Nice crackle across the top. Bet you could see some apples poking right through!

"Parchment sling" - now there is a term I have never heard used before, referring to what you are referring to. Interesting. Cake looks great! I think you should make it with chicken eggs next time so you can compare the results with the duck eggs. I'm very interested in knowing if there is any difference.

oh my oh my! thats looks good! What is it about whipped butter and sugar? I just wanted to stick my finger in THAT! LOL

This sounds terrific Bob!! Id love a slice with my coffee right now. Bet there is not one crumb left thoughas it looks fantastic!

I love me some wicked simple. I like the topping this way!

Regarding duck vs. chicken eggs, there are some confounding factors. Even at this point those duck eggs are fresher than any chicken egg you are likely to buy in a grocery. They were as fresh as 24 hours out of the duck when I gave them to him a couple of weeks ago.

Even so, the protein/fat ratio is considerably higher in the duck eggs, which would lead to a tenderer crumb, what with less stiff-cooking albumin and more magical lipoproteins. I love me some waterfowl in whatever form :)

TBG: Oh, totally. Just like my baking is better with the eggs I get from the gal down the highway than the eggs at my local overpriced grocery store that come from God-knows-where and have been sitting around for God-knows-how-long.

Seriously, Coyote. Egg freshness is paramount. But if you can get your hands on any duck eggs I cannot recommend them highly enough. I suspect goose eggs would have similar properties all things considered, but I have never had the opportunity to find out :)

Thinking further, I bet you could fake duck eggs simply by using two chicken eggs plus one yolk for each two duck eggs. The fats involved are still not quite the same, but the relationships are pretty close based on my napkin math.

Either way, freshest = best. (See also Bob's previous use of the eggs I got for him from the same source, but before the ducks).

pigpig: They are the best, I suggest trying to get some.

Sarah Alaoui: Let me know how it turns out!

Dawn: Heh, I don't know if I have the follow-through to actually write a cookbook, but I'm flattered that you think I should. :D

Jenn: Yeah, that's a big selling point for me too.

Steph: Thanks!Perseverance is the trick to smooth cake batter. You keep going long past the point when it starts hurting. Heh. ;)

Duo: Heh, you could!

Wandering Coyote: ... what do you normally hear it used for? I think I heard it first on America's Test Kitchen, but I could be using it completely wrong. It seemed more rich than when I make the cake it's based off of, but that could be any number of things. I will be making it again with regular eggs and I will let you know how it goes.

Danielle: Heh, I get that same urge.

Donna: Actually, we've been good. We stretched it out over almost two days! Heh.

noble pig: Me too, I was pleased with the work/result ratio.

I think Dawn has the right idea!! This looks yummy! I love the cinnamon topping.

Yum! I'd love a piece of that!

Been having fun browsing through your archives and found this cake. This one's definitely a bookmarker. Awesome experiment, Bob. I love duck cooking and baking with duck eggs too. They're more widely available and inexpensive in Asia.