Something To Do With Leftovers: General Gau's Fried Rice 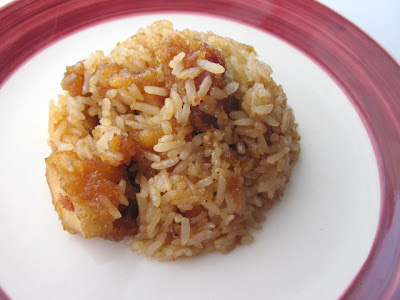 I had some leftover General Gau's chicken and white rice. So I made fried rice out of it. It came out quite well, but I didn't take any pictures of the process. Partly because I'm still working on my fried rice technique, but mostly because I'm all doped up on cold medicine and can't hold the damn camera still to save my life. And don't even ask me to set up a tripod, I'm lucky I didn't set myself on fire frying the rice, let alone fiddling with other stuff while I was doing it.

Basically all I did was fry the two day old rice, in a hot wok, with some garlic/ginger/canola oil. Then I added maybe 3-5 tablespoons of the sauce from the chicken (I'm not really sure how much. See above, re: cold medicine) and stir fried it till the liquid was mostly absorbed. Then I added in the chicken, chopped up into bite sized pieces and kept stirfrying it till it was all heated through. That's it. 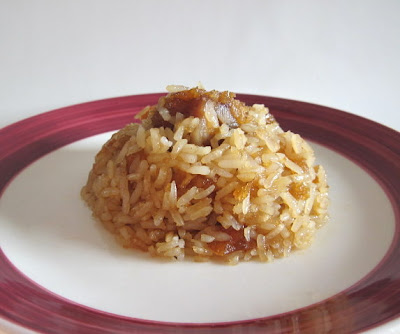 Next time (and there will be a next time) I'm going to go all out and add more veggies and stuff to it. But this was a test run, to make sure it would work. And I didn't have to do too much stuff, which was also part of the goal.
Email ThisBlogThis!Share to TwitterShare to FacebookShare to Pinterest
Posted by Bob Labels: asian-esque, chicken, leftovers, rice at 8/17/2009 12:00:00 AM

I love love love fried rice made at home and this sounds lovely. Hope your cold disappears soon and that you are feeling better!!

I've never heard of General Gua's chicken - what is it?

Donna: Thanks! I agree, homemade fried rice is the bomb.

Wandering Coyote: That's rough, Gau is the best. You might know it under a different name, like Tso or Tau. It's chicken (usually thighs) deep fried in a batter that gets really crispy. Then tossed in a spicy (in theory)/sweet sauce.

Sounds delicious - great use of leftovers!

Fried rice is the best way to get rid of leftovers. I do that almost every week =)

I love stir fried rice! Its so easy you can make it even while doped up! haha Hope you feel better.

More leftovers! Fun to reinvent, huh? Looks like we'd eat it all up.

Great way to use up leftovers! I hope you feel better soon, too. Summer colds suck.

YAY for leftovers! Gotta love it!

What a great idea!! This sounds better than the original meal! Get better soon!!!!!

this is some good sounding fried rice!

nice looking fried rice, looks like a great use of leftovers. Hope you are feeling better now!

I just started making something like this once a week, and I CHEAT! I buy frozen brown rice at TJs as well as some Korean bbq meat. I just nuke the rice, add the cut up meat, some scallions, soy sauce, scrambled eggs and frozen peas. It takes less than 10 minutes, and everyone loves it.

YOu cannot go wrong with fried rice. What comfort food!

fantastic use of leftovers! I will definitely have to give this one a try!!!