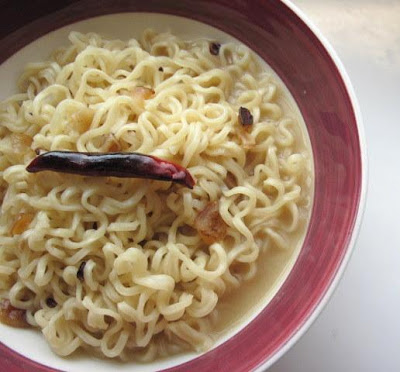 Saute the onion for a minute. Then add the garlic and the pepper. Add the stock, ginger, any salt and pepper that is needed and vinegar and bring it to a boil. Add the noodles and cook till done. Remove the pepper before serving.

Part of my cold is some serious congestion, so naturally I wanted something spicy. I've had these kicking around for months, 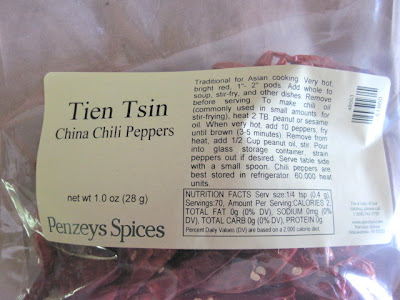 waiting for me to make kung pao chicken. I haven't gotten around to that yet, but when you want spicy they are the way to go. 60,000 heat units and they still have a lot of flavor. Good times, kids. So I decided to just wing it and make myself some spicy noodles. They came out really good. I used the chicken stock I got in my Emeril package from Foodbuzz (thanks Foodbuzz!).

I'm not really an Emeril fan, I'll admit it. He is a little too... much for me. I don't want to be yelled at while I'm cooking (apparently that's all cooking school is, according to my buddy who went to Johnson and Wales. So I'm glad I never went.) and I don't think yelling at the food makes it any better. Plus he reminds me a lot of a really obnoxious truck driver I used to work with. They're both from Fall River and sound exactly the same, right down to no volume control. Always using their outside voices. Anyway, the stock was good. Not as good as homemade, clearly, but better than the cheapo store brand stock my mom would buy if she didn't have any homemade on hand. I loved the horseradish mustard that came with it, but I haven't tried the spices yet.

First I sauteed up the onion for a bit, then added the garlic and one (1) pepper. 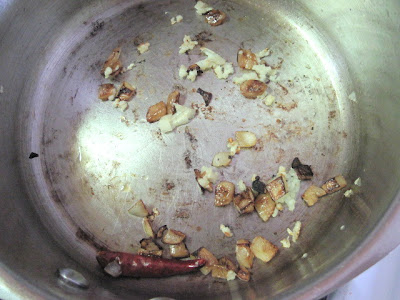 Just one. I could have done more and still been able to eat it, but one was just right. It burned a bit and cleared my sinuses up, but didn't keep me from from being able to taste the dish or promptly going back for more. I love spicy food, but if it's so spicy I can't taste it then what's the point? Oh and these are peppers that are best handled with gloves. Seriously. These little ladies aren't messing around. They aren't the hottest peppers in the world, but they're hotter than cayenne and jalapenos. Oh, and when you're sauteing you want to be careful that it doesn't break, that would move the dish from spicy to weapons grade. Just so you know. But once that's all set you want to add the stock. 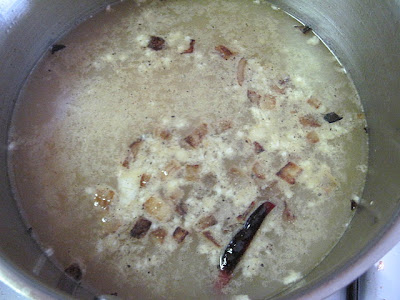 I tasted it and it wanted salt. Which is another tally on the plus side for the stock, it isn't wicked salty straight from the container. I also added a little black pepper, because I'm like that. And the ginger. I wish I had had fresh ginger for it, but I didn't. But fresh would have been amazing. The stock was quite rich too, also good, so I added a splash of vinegar to lighten it up. Then it was noodle time. 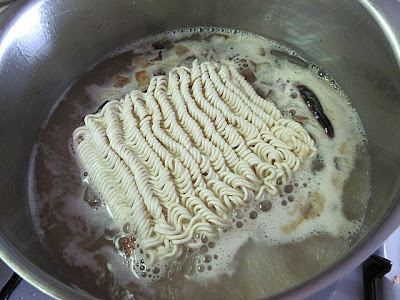 I used Top Ramen, I think. I still have the seasoning packet that I didn't use kicking around somewhere, but it doesn't really matter. Any packaged ramen will do fine, this isn't haute cuisine here. But that's it, once the noodles are cooked, a great dish for when you are sick and want something spicy and light. 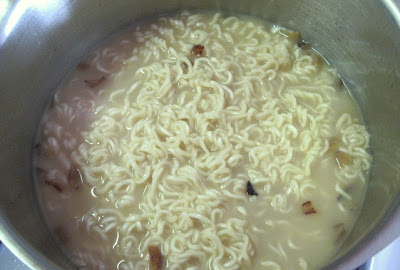 It would be even lighter with broth instead of stock, if you're into that. 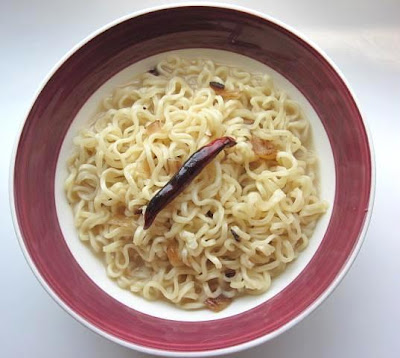 Some bean sprouts or shredded carrot would have been nice too, or even some chopped cucumber. 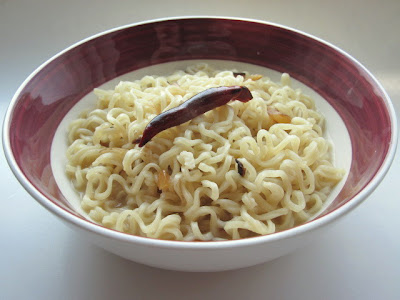 Oh and you do want to remove the pepper before you eat, even if you are using it as a garnish. Unless you're my dad, then go nuts. Heh.


Email ThisBlogThis!Share to TwitterShare to FacebookShare to Pinterest
Posted by Bob Labels: asian-esque, experiment, pasta at 8/19/2009 12:00:00 AM

I posted a ramen recipe today too. LOL.

Isn't the stuff great. I've got to try your "experiment"

...or my husband, LOL...he'd probably add extra just so he could eat them along with the rest! This is an awesome bowl of sinus-clearing goodness- I like it!

now this is perfect for winter. I could not eat this right now since it's 1000 degrees outside, but you are sick so I know you have to.
Hope you feel better...

YUM!! I do stuff like this with ramen almost every week.

I'll have to check out some of those peppers next time I head to Penzey's. I have been using the Lemon Drop Chilies I grew last year... but I'm almost out... and the thai chilies I'm growing this year aren't nearly as hot as I thought they'd be.

What a delicious ramen bowl! I love the spice (will have to try those tien tsin peppers!) and the ginger flavor here!

Ramen is so versatile, hope it cleared up your cold!

Gorgeous presentation, Bob. I love ramen in any form, though I suspect this would be too spicy for me.

girlichef: I almost ate mine... but wasn't feeling that brave. ;) Thanks!

Dawn: Thanks! Yeah, it would have been better in the winter, but you do what you have to. Heh.

Spryte: Honestly I'm not sure how they compare to other chilis, but they are definitely hot. Heh.

noble pig: Not permanently, but I felt better for a bit. ;)

Wandering Coyote: Thanks! It was pretty spicy, but you could moderate it pretty easily.

I LOVE spicy and while I haven't had ramen in quite a while this looks delicious!! I love the presentation too!! I hope you feel better and that the spiciness helped!

That looks like some gooood stuff! LMAO @ "yelling at the food" (almost choked on my coffee there)

Nice. I love ramen and it's great when you have a cold. I had to laugh about Emeril...what's with the yelling indeed.

I was over at Jenn's blog, she posted ramen dish too. Wahhhh, everyone seem to crave this instant noodle. I was having this too last night. Yum!

I bet this yummy soup made you feel a lot better. I made something similar when I was sick. Love those China Chiles.

My dad would eat the pepper too. Great idea for jazzing up plain old packaged ramen. Hope it helps you feel better!

Chew on That said...

I so wish I had recipes like this or thought to cook more in college instead of eating just a plain bag of ramen :)

This sounds perfect for your cold.. a nice hot bowl of a delicious sounding comforting soup! Nicely done!

ChefBliss: Thanks! The spiciness did help. I hadn't had ramen in a while either, I got a craving. ;)

Hungry Dog: Thanks! Yeah, it's one of those "sick foods" like chicken soup.

Reeni: Yeah, those chilis are the bomb. I wish my girlfriend would eat spicy food so I could use them more.

Palidor: What is it with dads and wicked spicy stuff? Although I have a sister in law who loves the heat too...

Chew on That: Heh, this definitely would have impressed college kids. ;)

Donna: Thanks! It was just what the doctor (er, that would be me I guess) ordered.

We love any kind of ramen. These look just so fantastic--can't wait to give them a try! Hope you're feeling better!

Who knew Ramen noodles could be so delicious? I'll be passing this onto my kids heading out to college this week- thanks for sharing!