Sunday Cats and a Sandwich

First things first. Since this is a food blog, here's the sandwich. 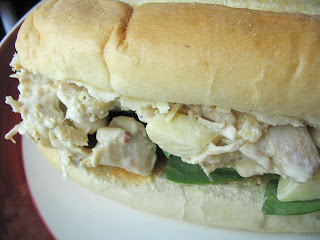 It's chicken salad with caramelized onion, apple and pine nuts. I'll post the recipe tomorrow. It was wicked good. Especially on a toasted roll with some spinach.

Now, the cats. Here's the thing. Like I mentioned last week, I'm all out of posts from my old blog. So if the Sunday cat posts are a bit more rambling than usual for a while it's because I haven't written about them in ages. But all of these pictures are reasonably new, Bob and Noodles have settled the pecking order (Noodles is in charge) and things are pretty much settled. Some of the pictures won't be so hot, mostly because they're often cutest at night and I can't get decent lighting in this apartment at night. But since I'm not trying to make them look appetizing I'm a bit less concerned about the light quality. Some of them are good though, here's Bob looking particularly regal. 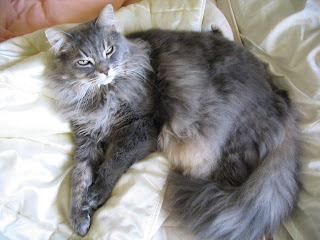 And Noodles pretending to be a seal or something. 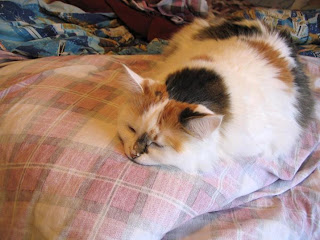 Then there is this one. 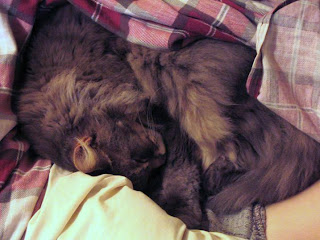 See, Bob is being really cute, cuddling up with my girlfriends foot. But the lighting isn't very good at all. This one is Noodles in the cat carrier that we were trying to get Bob into. 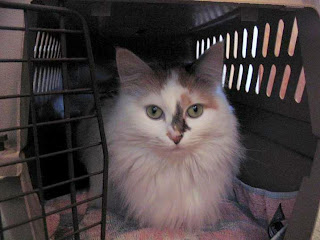 He had to go to the vet and she wasn't helping. Heh, Bob looks more invaded than normal here. 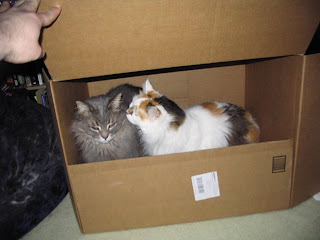 I had never seen them share a box before this. Not to mention Bob sitting still for kisses. Of course if he goes to sniff Noodles she smacks him. And if she wants to sleep in the chair while he is she just sits on top of him. 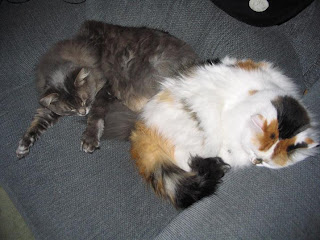 He doesn't seem to mind, but he might just be thinking "If I ignore her, maybe she'll just go away. She just wants me to react."
Email ThisBlogThis!Share to TwitterShare to FacebookShare to Pinterest
Posted by Bob Labels: cats, chicken, fruit, salad, sandwich at 4/04/2009 10:00:00 PM

What beautiful cats. Did they get any chicken salad?

I love love love chicken salad with apples and nutsin it. I have a pretty mean chicken salad recipe that I have yet to post.
Thanks for your comment on my Shepherds pie. It is a keeper!

Cute kitties :) I love chicken salad with apples in it.

Wow, those sandwiches do look lovely... did the kitties partake?

I've just got two things to say: those are some seriously adorable cats... and that sammich looks incredible. Can't wait for the follow-up post. I'm thinking it had to be perfect on a nice toasted roll. YUM.

Noodles cracks me up every time! They are both too cute. That chicken salad rocks!

Dawn: The pine nuts were good, but I think cashews would have been better.

Pierce: Heh, no chicken salad for them. Onion can make cats ill, I'm told. Plus they wouldn't have appreciated it properly.

Leslie: This was the first time with apples and nuts in it for me. I liked it a lot.

JennDZ: Thanks! Nope, we just tortured the cats by eating it in front of them and going "Mmmmm, this is goooood". ;)

noble pig: It's so true.

Joie: Heh, they're all fat and gristle. They don't get anything like enough exercise to have any good meat. And we've thought about eating Noodles a couple of times...

Reeni: Thanks! If Noodles keeps me up again tonight, you can have her if you want. ;)

I love healthy eats like your sandwich ... and your cats are so adorable. I wish I have a cat :p