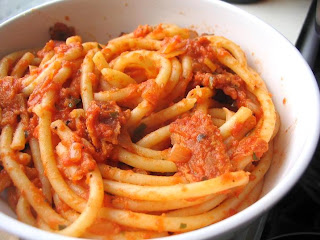 Chop bacon into bite sized pieces and brown it in a pan. Remove it to a paper towel lined plate and pour out all but a tbl worth of fat. Brown the onion then deglaze the pan with the vinegar. Add the tomatoes, red pepper, black pepper, bacon and cheese. Reduce heat to low and let simmer for 10 minutes, stirring frequently. Add the basil and let simmer for another 5-10 minutes, still stirring frequently. Add the pasta and stir to coat. Let it sit on low heat, stirring occasionally for a couple minutes. Serve, garnish with more cheese.

Ok kids, we all know this song. What makes everything better? Bacon! That's right. And bacon and tomato sauce is like some kind of wonderful drug. I posted this recipe before, but it was a long time ago and it wanted an update. I've changed the original a little, but not really that much and I bet Gina would approve of what I've done. Instead of using cans of tomato puree I've started pureeing diced tomatoes myself. This gives me a bit more sauce, which I like, and gives it a fresher tomato taste. Plus I added more bacon. Because bacon rules. I've also taken to not adding the red pepper flakes to the sauce, but sprinkling them over individual portions since my girlfriend doesn't feel it for spicy. This is a great, fast meal. I've even figured out the proportions for doing a single portion with an eight ounce can of tomato sauce. Well, I eyeball it, so it would be hard to share the measurements, but it's great for when I come home late from work. So, let's do this thing, shall we? 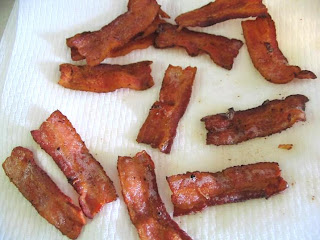 Mmmmm, bacon. Now you have a pan full of bacon fond and grease. 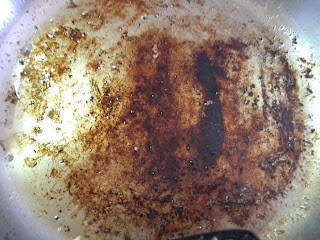 Mmmmm, bacon fond and grease. Now pour out most of the grease then plop the onion in there. 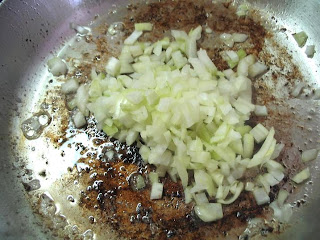 Brown it up well, 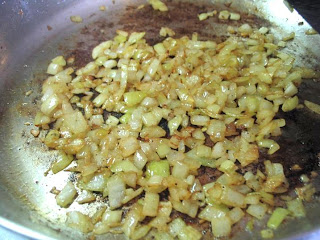 then deglaze with the vinegar. 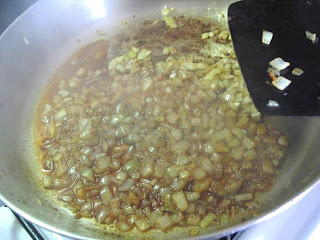 You could use wine in this, but I like the pop that the vinegar gives it. If you use wine you might want to bump it up to a half cup. Oh, and when you pour the vinegar in there, step back. The fumes that come off will knock you down at first. Trust me. Once you've scraped up all that gorgeous bacon fond pour in the tomatoes. 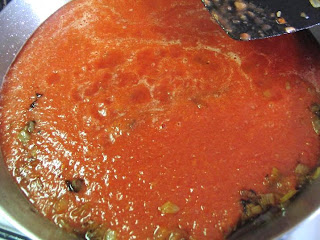 You could use a big can of crushed tomatoes instead, but I've found that the flavor of pureed diced tomatoes is better. For me. You can do whatever you like. Now add the cheese. 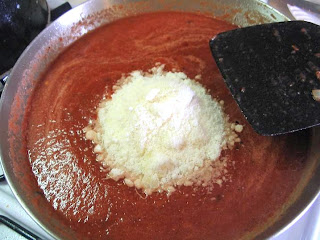 Lots of cheese. I got this stuff from the little Italian deli down the street from me, it is wicked good. I let it simmer for a few minutes to melt the cheese, stirring frequently. The only thing worse than burned tomato sauce is burned eggs. Ugh, nasty. Next, the basil. I've used dried basil in this recipe and it is... adequate. If you don't have anything else. Fresh is clearly the best. This time I'm actually using this stuff. 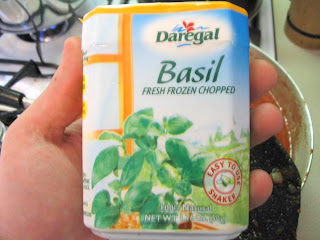 It's frozen fresh basil. These folks were nice enough to contact me and send me some free samples in exchange for a review. I'm going to write a whole post about it once I've used them in more stuff, but so far so good. It's not quite as good as fresh fresh, but the difference is really pretty small. And this stuff keeps for a lot longer than fresh fresh. Well, I'll go more into it when I write the review, but the verdict at this point is a resounding thumbs up. I added three tablespoons (and took some wicked crappy pictures. Sadly, this was the best one I got. Grumble.) at this point, 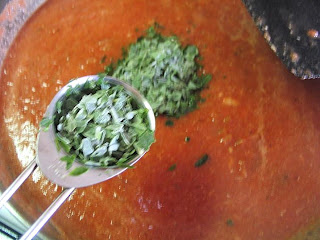 let it simmer for about ten minutes, 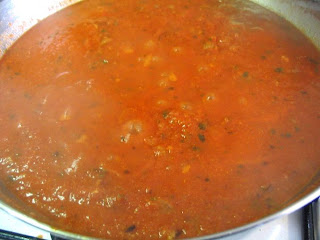 then added another tablespoon. You could add even more if you wanted, it's hard to have too much fresh basil flavor in this sauce. But I was hungry and wanted to have at it, so I tossed in my pasta. 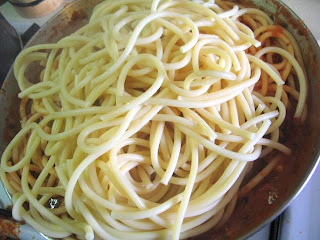 Hmm. We're gonna need a bigger boat. And you can ignore the sauce splashies all over my stove. It was clean when I started cooking, I swear. Anyway, I moved it all from the frying pan I was working with to the pasta pot, stirred it around and let it all come together. 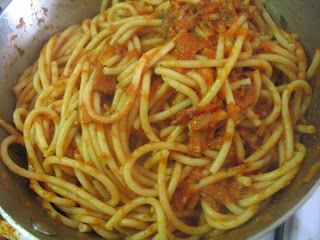 In retrospect, it would have been easier to pour the sauce onto the pasta while it was in the pot, but what are you gonna do. I like to toss my pasta in the sauce to finish cooking, I think the flavor is best when the pasta absorbs some of the sauce. But you could also just spoon the sauce over it when you serve, if you are into that. And there it is, spaghetti al amatraciana. 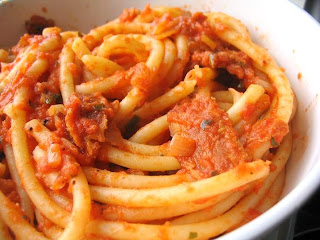 And thanks to Dajana taking the time to give me a little Italian lesson over at Bakespace I can even pronounce it now. Heh.
Email ThisBlogThis!Share to TwitterShare to FacebookShare to Pinterest
Posted by Bob Labels: bacon, cheese, italian-esque, pasta, sauce, updated post at 4/02/2009 10:26:00 PM

This looks delicious, I will have to incorporate it into my repertoire. Thanks for the recipe.

Bacon, bacon, bacon! We feel like the dogs in those Beggin Strips commercials whenever we smell bacon.

Looks good... but then I love any kind of pasta with anything on it! I got some frozen herbs too and am going to have to post about them soon... I really like them!

I have never seen frozen herbs before, hmmmm.

We worked with someone who said, and I swear this is true, "You could wrap a dog turd in bacon and it would be good."

I really hope he doesn't know this to be a fact. But c'mon....everyone loves bacon!

RobbingPeter: No sweat! Let me know how it turns out for you.

Duo: My girlfriend will actually walk into the kitchen imitating that dog when she smells bacon.

Karen: Me too, I was quite pleased with the frozen herbs.

tamilyn: Check out the frozen herbs if you see them, they are a good time.

Pierce: ... how... colorful of him. Heh. I've known vegetarians to turn back into omnivores because of bacon. :)

Bacon makes everything better! I like a nice smooth sauce, too. This looks perfect. Those herbs are cool. I hardly ever use my fresh ones before they go bad.

With bacon...oh geez, now that's the way to eat pasta.

I love this pasta dish!! Bacon and anything go so well.. Yes, a pork girl at heart;) I have never seen frozen basil before.. do you prefer it to dried? I know fresh is best just curious as to the comparison to dried? Have a great weekend, Bob!

This is m go-to dish when I'm starving and want dinner now. But I use bucatini. Have you tried that pasta? Wonderful.Now I'm craving bacon--thanks!

Bacon is a wonder ingredient! This looks so delicious. Funny thing is that, from the look of the ingredients list, I think I've made al amatriciana before and didn't know it! 8-)

When I was "vegetarian" for 2 years, I still ate bacon on occasion. Need to find that frozen basil!

Looks good! I love the addition of bacon in pasta ;p

Bacon and cheese! There might just be a way that I can make my boyfriend eat pasta.

Reeni:Thanks! It so does. The frozen herbs are quite good, I'm pleased. I haven't used them much yet, but so far they are very good and I recommend them.

Donna: I definitely prefer it to dried, it is almost as good as fresh.

Dawn: I haven't, but I will. I enjoy different kinds of pasta.

Tangled Noodle: Heh, I've done that before. Like with frittatas.

noobcook: It's a great addition, to be sure. :)

Jessica: If a dude won't eat this, you're in rough shape. ;)