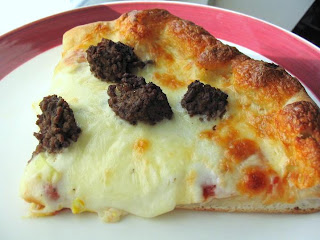 Preheat oven to 500 (if you're using a stone, preheat for at least a half hour, a whole hour is best). Roll out the dough and top with mustard and ketchup. Top with cheese, onion and hamburger. Bake till golden brown and bubbly.

Ok, everyone knows how to make pizza. I know this. I also know that I've covered pizza in the past. But this is a different pizza! It has totally different stuff on it. Plus I made it and took pictures. So, I'm posting them and the recipe. It's kind of what I do. Anyway, here's the thing about hamburger pizza. You just put what you would put on a hamburger, on a pizza. So it can be anything. I have a standard combination here, but you could do barbecue sauce, bacon, jalapenos, green chilis, tomatoes, mushrooms, whatever you like. Although I don't recommend lettuce or mayonnaise. Unless you do it afterward. Once I had some cold bacon pizza so I put a little mayo and lettuce on it and it was like a BLT. That was good. But that's not what we're doing here. This is a basic hamburger pizza.

First, roll out the dough and top it with ketchup and mustard. 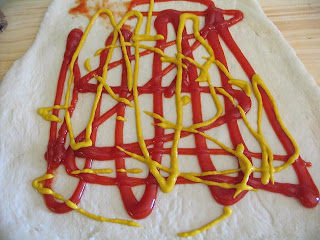 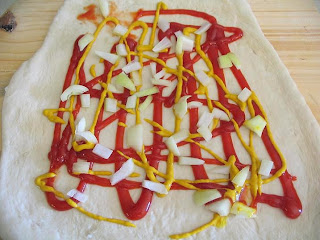 I put the onion under the cheese so it doesn't brown or cook all the way. If you want brown onion, put them on top of the cheese. Now cheese. 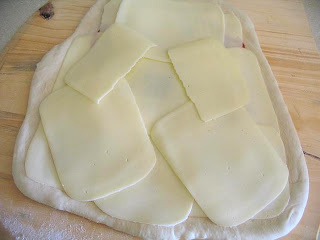 I would normally do a mix of cheddar and mozzarella, but I didn't have any cheddar today. So it was all mozzarella. I like using slices. They don't make a mess when I'm a klutz. Now the hamburger. 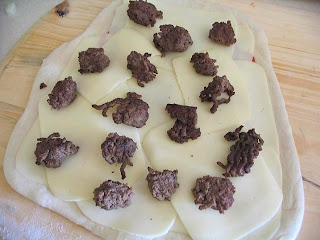 I seasoned the hamburger with salt and pepper, plus a little liquid smoke. Then I just browned it up and crumbled it. Then I tossed the whole thing in the oven for maybe twelve, fifteen minutes. Till it was all brown and spectacular. 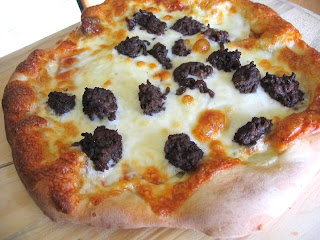 You know, I don't think I've ever made a round pizza in my life. Huh. Whatever. The trick to getting all that crunchy browned cheese around the end is to keep the cheese layer thin there. If you are using shredded cheese just sprinkle a little bit around the edge bit and you will get the same kind of thing. And there you have it, a pizza that tastes like a hamburger. Good stuff kids.
Email ThisBlogThis!Share to TwitterShare to FacebookShare to Pinterest
Posted by Bob Labels: beef, bread, cheese, hamburger, pizza at 4/10/2009 12:00:00 AM

Yum-love pizza, love burgers. I can get two fixes in one! Great idea

Oh My two of my favorite things in one dish.. I could just kiss you! Looks fantastic!

Hey Bob..want my address? You can send that directly to me! Oh gosh that looks good. I don't really think the shape of the pizza affects the taste. Know what I mean?

oh
my
God!
Holy smack-a-doodles! Bob you have one of my favorite ways to eat pizza. I love putting mustard & ketchup on my pizza. Hubby HATES it and hates hamburg on pizza. The one person in the world that hates hamburg on pizza and I married him.
I salute you Bob on this one....so good.
(if you're every daring enough and I know you are, try adding french fries and bacon to it...oh yeah!)

Very creative and it really sounds good! Bacon would be good with it too :)

This is a nice twist on the concept. When I had clicked over I thought it was simply going to be ground beef on a normal pizza.

How cool....I would have never thought to use ketchup and mustard and do what you did. I agree with Van Santos, VERY creative.

I was so surprised to see ketchup and mustard, very clever. A great idea for pizza!

Donna: Hey now! This blogging thing is looking up! :)

Christine: Thanks! I do know what you mean and totally agree.

Dawn: French fries and bacon? Oh man, that sounds unreal. Next time, for sure.

Van Santos: Thanks! Heh, I didn't even think of that when I named it. I should probably be a bit more specific...

No, don't change the name! It's exactly what the pizza is!

I love hamburger and I love new ways of preparing hamburgers. Love this!

Wow. I made this tonight, deep-dish style, for my husband. He took one bite, and his eyes glazed over. lol He said it tastes EXACTLY like a hamburger. I put red onion on top of the cheese, instead of under, and used some grill spice blend in my ground beef.

Kudos on the blog and the recipe! I'll definitely be visiting more often! :)