How to Caramelize Onion 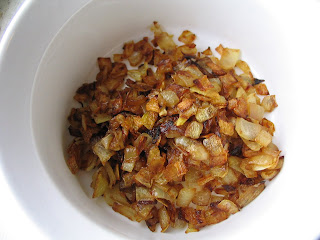 Heat oil over medium heat and add the onions. Add a pinch of salt and stir the onions to coat them with the oil. Let them sit for a about 2 minutes, then stir. Repeat till they are a deep brown, about 20 minutes. If they are browning too fast, turn down the heat. If they aren't browning enough let them sit for longer.

All right, show of hands, how many of you like caramelized onion? Yeah, I thought so. I mean, how can you resist this? 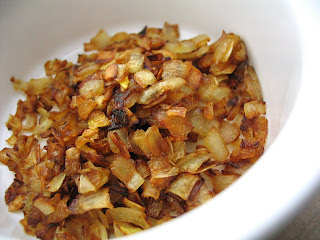 Sweet, savory little chunks of flavor. I've put them on pizza, in bread dough, on burgers, on steaks, on chicken, mixed in meatloaf, most recently in chicken salad. You can put them on a green salad, in an omelet, stick them under the skin of a chicken you're going to roast, in stuffing, the possibilities are endless.

I've known a disturbing number of people who either don't know how to caramelize onions or are afraid of doing it, assuming they will just burn them. Now they are something you need to watch pretty carefully (the onions, not the people), there is a lot of stirring and it has to be timed right. Both those things scare some folks off. Me, I like watching carefully and stirring. That's why I always make stew on the stove, so I have to stir it every ten minutes or so. But when you're caramelizing something you can't stir it too much or else it won't do the thing. So you need to let the onion sit to brown, then stir them before they burn. I have some visual aids... 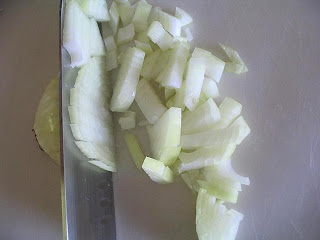 Although you can caramelize pretty much anything. If it doesn't have enough natural sugar in it you can just add a little. I had caramelized sauerkraut once. It was... interesting. But, onion is what we're doing here. Put some olive oil (or butter or both) in a pan. 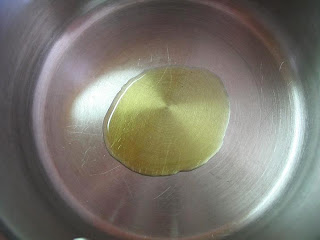 You should use one that has good surface area, the more contact between the onion and the pan the better. I've never measured oil for this, but I used about three quarters of a cup of diced onion and maybe a teaspoon of olive oil. Heat the pan to medium and add the onion. 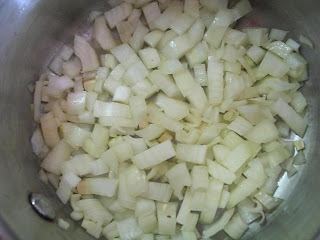 Add a pinch of salt. You can add a little sugar if you want, to help them get going, but I've never found it necessary. I chopped the onion pretty fine because I was putting it in that chicken salad. I would do rings or half rings if I was putting it on something instead of in it. Now just stir it all to coat then let it sit for a couple minutes. 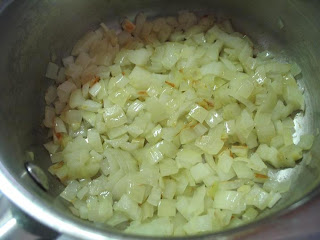 Repeat. If it's browning too quickly, turn down the heat. Burning = bitter and bitter caramelized onions aren't so great. All told, this can take up to an hour, depending on how much onion you are making and how big the pieces are. I was just making a little and it was cut pretty small, so it only took about fifteen or twenty minutes. Here's about halfway through. 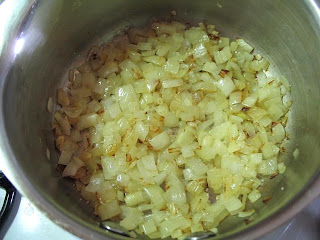 And this is the goal. 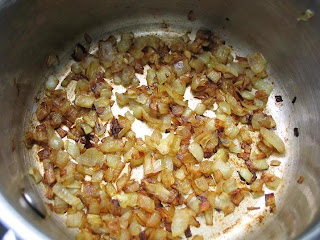 You'll notice there are still some that aren't very brown. Since my pieces were small some were flirting with being burned, so I decided to pull them off a little early. It didn't make an appreciable difference in the end product. If you want to you could deglaze the pan at this point and make a great onion pan sauce. A little red wine or balsamic vinegar and broth, maybe some Dijon mustard and black pepper. Then spoon it over some steaks. Or potatoes. Man, that would be good. That's what I'm doing next time I make crash hot potatoes. Now I charge all of you who haven't done this before to go forth and caramelize! You'll be glad you did.
Email ThisBlogThis!Share to TwitterShare to FacebookShare to Pinterest
Posted by Bob Labels: how to, onion, vegetarian at 4/08/2009 12:00:00 AM

Me, me! Pick me! I am flailing my hand in the air because oh yeah, I love caramelized onions! They are easy to make and some folks just don't know that. Great post.

Caramelized onions are just about one of my most favorite things in the whole world. These look delicious!

Or, pour some plain yogurt, herbs/spices and stir... now that's a healthy way to consume it ;)

"Go forth and caramelize". Hehe! Love caramelized onions, put 'em on everything.

Hm Ozge, I see some diced cucumber and garlic as well, sort of a caramelized onion tziki, maybe over some chicken marinated in lemon juice, olive oil and oregano :)

*runs away to check refrigerator*

And the house always smells so good and people always think you're a great cook even though all you've done is carmelize onions. I love that about them.

Good tutorial! I could eat caramelized onions just on their own!

Pierce: That's the reaction I was hoping for! :D

Ozge: Oh yeah, that sounds good. Let it sit in the fridge overnight to let the flavors mingle...

Vicki: ;) They are good times.

Karen: Me too, they are just so damn good.

I love caramelized onions, they are so sweet and tasty. Love your step by step guide!

They are the best! In the past, I made the mistake of making too much onions in a too-small pan or pot and they ended up being 'smothered'. That is, the water steamed out but then condensed back into the pot, thereby stewing the onions; they simmered rather than caramelized. Lesson learned!

Thanks for your comments Bob! Just came by to show some blog love!

yum... I love caramelized onions.. sometimes, I add a little bit of balsamic vinegar to it for a little tang in the background.

Love carmelized onions on just about everything from sandwiches to steak. Thanks for the tips!

Tangled Noodle: Yeah, I've done that too. It's wicked disappointing.